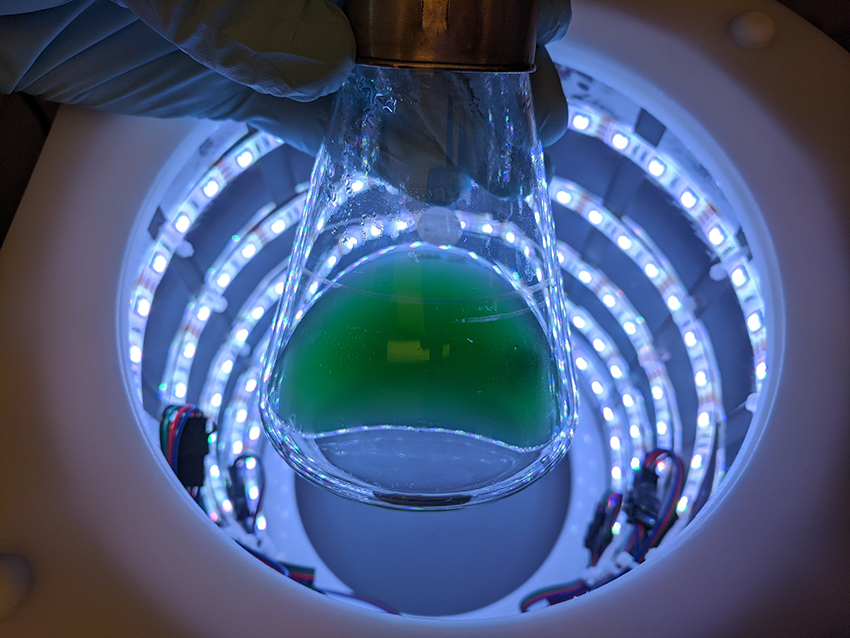 A flask of Synechococcus cyanobacteria above a device that stimulates growth. Image: Stephanie Dutchen

In postdoctoral fellow Max Schubert’s view, solving climate change requires two kinds of people: those who dream big and those who make the dreams happen.

Some dreamers—including Schubert’s lab head, George Church, the Robert Winthrop Professor of Genetics in the Blavatnik Institute at Harvard Medical School and a founding core faculty member of the Wyss Institute for Biologically Inspired Engineering—envision reducing global warming by genetically turbocharging an oceanic bacterium’s natural ability to pull carbon dioxide from the atmosphere.

As a self-described doer, Schubert has stepped up to the bench to start figuring out how that’s possible.

He’s focusing on Synechococcus cyanobacteria: an ancient, blue-green type of phytoplankton that thrives at the surface of waters around the world.

Like the plants they gave rise to, cyanobacteria transform sunlight into energy. Energy allows them to grow. Growing requires carbon, which cyanobacteria get by absorbing and breaking down the carbon dioxide around them.

As it stands now, cyanobacteria take so much carbon dioxide out of global circulation that Schubert has heard them called “Earth’s other rainforest.”

But scientists in the Church lab and beyond wonder if they can do better.

“Half of the carbon sequestered on Earth through photosynthesis is stored in the oceans, and most of that is done by this one genus of cyanobacteria,” said Schubert. “So Synechococci already photosynthesize and sequester carbon very well.”

“The question,” he said, “is whether we can create genetic tools that encourage them to pull even more carbon from the air.”

Schubert wants to find genes that make the bacteria grow faster when exposed to sunlight. To do so, he’s using a tool he created for his doctoral research into antibiotic resistance in E. coli bacteria.

The tool allows him to churn out a variety of Synechococci with different genetic mutations, give each strain a genetic name tag, mix them together in a flask, shine light on them for a day or more, and then run a single experiment to identify which strain grew best. This so-called multiplexed technique lets Schubert make millions of observations at once instead of the traditional method of conducting one test per flask.

Schubert can then study the individual mutations linked with enhanced growth or guide the bacteria to generate even more helpful mutations. That knowledge could eventually allow researchers to genetically program Synechococcus bacteria to sequester as much carbon as possible.

Balancing potential with practicality, Schubert’s proposal for the project won the HMS Department of Genetics’s recent climate change competition, earning $250,000. Some of the funds went to procuring an incubator that provides optimal growing conditions for the bacteria. Schubert is sharing the device with one of his contest competitors, finalist Lakshya Bajaj, who’s also investigating cyanobacteria.

The work is still far from saving the world. If Schubert’s project generates results, nothing would get implemented unless and until plenty of safety precautions were in place, he said. For instance, the researchers would want to ensure that carbon-gobbling cyanobacteria wouldn’t disrupt ocean ecosystems. And because uncontrolled cyanobacteria can form blooms that produce toxins that make people sick, the researchers would want to find ways to prevent fast-growing Synechococcus from threatening the health of humans and other organisms.

Such stuff remains in the realm of dreams for now. Potential applications in the nearer term include capturing more carbon dioxide in places where fossil fuels are burned, such as industrial factories, and boosting the food supply for farmed fish.

“Companies are already growing algae and cyanobacteria as feed; it may be possible to plug into that industry,” said Schubert.

Other institutions have taken notice. Schubert joined a team spanning multiple universities and won initial funding from the MIT Climate Grand Challenges program to further develop his ideas. He and colleagues across the U.S. also landed a $1.7 million grant from the National Science Foundation—the fruits of an idea that stemmed from virtual chats with other postdocs when COVID-19 first hit the U.S.

“We co-authored the grant application over Zoom,” Schubert recalled. “Although our in-person research had to pause, we couldn’t be quelled by the shutdown.”

Schubert has his eyes set on even closer goals, such as learning more about photosynthesis and the carbon cycle—processes that, despite their importance for life on Earth, still hold many mysteries.

“Cyanobacteria are a good model for understanding where all the carbon is going now,” he said.

Along the way, he’d like to help build a tool set for the scientific community that makes cyanobacteria as easy and useful a model organism as E. coli.

“These would be early ways to provide real value on the road toward solving climate change,” he said.

Realizing that technologies must pair with policy solutions to achieve large-scale change, Schubert began thinking about his responsibility to advocate for climate science, policies, and practices in addition to doing research. The work has injected new vigor into his days.

“People of my generation are worried about saving humanity,” he said. “There’s a sense among millennials that we need to drop some smaller problems and think about how to fix this planet—or how to get to another one. It feels satisfying to work toward one of those goals.”