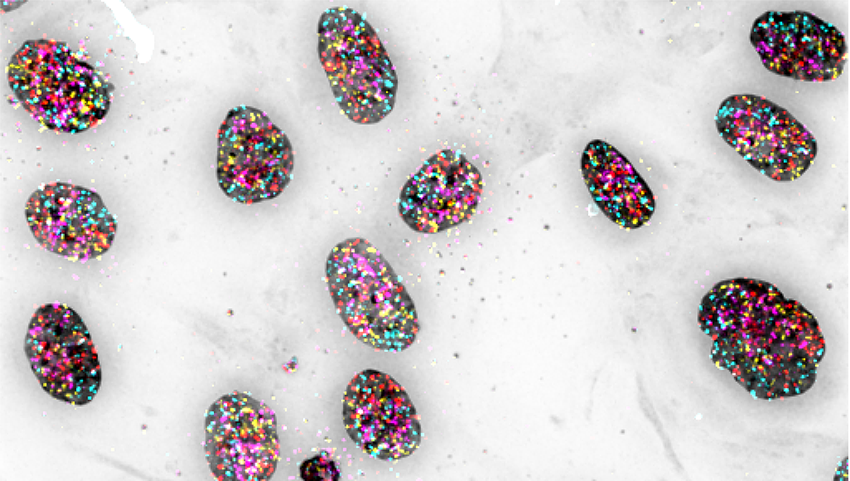 The intricate, tightly wound structures of chromosomes condense about two meters of DNA so the complete instruction manual for growing a human can be tucked inside a cell nucleus just 10 microns wide.

"This is like fitting something the height of the Empire State Building into a space no wider than a spaghetti noodle," said Huy Quoc Nguyen, research fellow in genetics at Harvard Medical School.

Those structures can affect how DNA behaves. For instance, dynamic changes in how a chromosome twists and folds can determine how much an individual gene is turned on or off in a given cell, tissue, organ or person.

Exactly how this process works—and how structural defects and variations can lead to health problems from birth defects to cancer—remains murky.

To better grasp how genome structure alters function, scientists have been developing imaging technologies that can take snapshots and video clips of large swaths of chromosomes in cells at ever-higher resolutions.

The ultimate goal is to observe genomes in their entirety down to scales of just a few nanometers.

Now, a team led by geneticists in the Blavatnik Institute at HMS, the Wyss Institute for Biologically Inspired Engineering and the Barcelona Institute of Science and Technology (BIST) has taken another step forward in this visual odyssey.

The researchers describe in Nature Methods a suite of techniques collectively dubbed OligoFISSEQ (sounds like “physique”).

OligoFISSEQ combines Oligopaints—computer-designed probes that attach fluorescent tags to specific DNA sequences, developed in the lab of Ting Wu at HMS and the Wyss—and fluorescent in situ sequencing, or FISSEQ, a method developed at the Wyss that reveals the locations of thousands of RNA molecules in a given cell as well as their genetic sequences.

The result: researchers can now quickly visualize more regions of the genome at once in human cells and create 3D maps of chromosome organization that are more complete and detailed than before.

Until now, genome imaging methods were based on hybridization, which captured, at most, a handful of targets at a time in nondividing cells, often focusing on just one or two chromosomes.

"We now know many more 'addresses' where specific regions of DNA reside in three dimensions within the nucleus," said Nguyen, who is co-first author of the paper with Shyamtanu Chattoraj of the Wu lab and David Castillo of BIST.

As a proof of principle, the study team used OligoFISSEQ to target up to 249 genomic regions distributed across all chromosomes in hundreds of cells derived from human skin. The team also mapped 46 regions of the X chromosome in even greater detail.

The researchers designed OligoFISSEQ to be compatible with many other common technologies for probing biology and biochemistry.

In the paper, they describe how combining OligoFISSEQ with OligoSTORM, another technique from the Wu lab, increases the speed with which scientists can visualize multiple large chromosome regions at super resolution. At the moment, those regions can range in length from tens of thousands to millions of bases—the “letters” of DNA code.

“We hope OligoFISSEQ puts us one step closer to imaging entire human genomes at both diffraction-limited and super resolutions,” said Wu, professor of genetics at HMS and associate faculty member at the Wyss.

“Giving OligoFISSEQ the capacity to meld with other technologies should extend its usefulness even further,” she said.

“In a nutshell, OligoFISSEQ is like your one-stop shopping market for genome visualization,” agreed Chattoraj. “You will have all the ingredients and you can cook your food the way you want.”

Wu is co-senior author of the paper with Marc Marti-Renom at BIST and the Catalan Institution for Research and Advanced Studies (ICREA) in Barcelona.

The idea behind OligoFISSEQ originated with co-authors Son Nguyen and Evan Daugharthy of the Wu lab. Nguyen is now at the University of Pennsylvania, while Daugharthy works at ReadCoor, Inc., a company based on FISSEQ.

Harvard University has filed patent applications pertaining to Oligopaints and related oligo-based methods for genome imaging. Wu and Daugharthy have equity interests in ReadCoor. Wu also has a research collaboration with Bruker Nano, Inc. Potential conflicts of interest for co-author George Church, the Robert Winthrop Professor of Genetics at HMS and a founding core faculty member of the Wyss, are listed here.