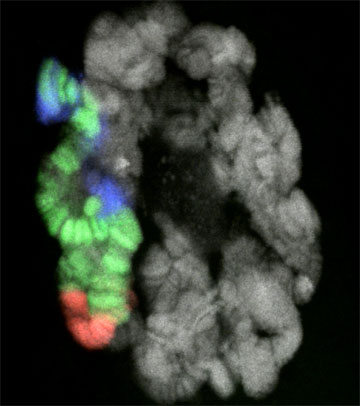 Sequencing genomes, from simple organisms to creatures as complex as humans, produces a torrent of information. That flood will likely grow as advances in technology continue to push down the cost of generating genetic data. But the ability to study the chemical nature of DNA has outstripped the ability of researchers to actually look at chromosomes — organized packages of DNA — and to see their position in the nucleus. How chromosomes are folded or stretched is critical to gene expression, with implications for congenital abnormalities as well as cancer.

A new tool promises to change the imbalance between what can be sequenced and what can be seen. “Painting” the genome with renewable, highly specific fluorescent probes offers a low-cost yet high-resolution method with the potential to improve genetic diagnosis in the doctor’s office and basic research in the lab. A team led by Ting Wu, HMS professor of genetics, described the method they call “Oligopaints” in a paper published online this week in Proceedings of the National Academy of Sciences.

“There have been some fantastic technologies that have given people a molecular handle on how chromosomes are folded — these involve looking at millions of cells at once,” Wu said. “What people are also hankering for is single-nucleus resolution where they can see every nucleus for itself. That’s where we need this kind of technology to complement advances in sequencing.”

For a long time scientists used chemical stains to view chromosomes in the nucleus. But they need to see chromosomes with greater precision in order to detect which chromosome they are looking at and understand how it is arranged in the nucleus, regardless of whether it’s intact or broken.

After chemical staining came chromosome paints based on genetic sequencing. They made use of a technique called fluorescent in situ hybridization (FISH) to light up chromosomes, but to date the method has been both laborious and expensive. Wu’s lab has focused on making probes that lower the cost by using easily made oligonucleotides — short, single-stranded DNA sequences — that they believe will better hug the chromosome, yielding a cleaner signal and better revealing chromosome structure and positioning.

These Oligopaint probes contain as few as 32 bases of homology to the genome and can target any sequenced region of the genome along a chromosome, compared to the 100 bases or more of other methods, which Wu believes can result in the probes bunching up among themselves and therefore generating a less than optimal signal. Each Oligopaint probe carries single-fluorophore primers, meaning it lights up at only one point, which should allow for greater precision in super-resolution microscopy and image interpretation.

One of the Wu lab’s goals is to make chromosomal analysis as inexpensive as a blood test. Such a test could potentially be used to screen newborns for congenital abnormalities or to guide treatment for cancer patients. The lab has thus far been working in fruit flies and human cell lines, but the principle could apply to any organism, including humans.

In the past, testing a single 50-kilobase region — a small fraction of the entire genome — could cost $25 or more. The same region costs anywhere from 10 cents to $1.50 using Oligopaint probes, Wu said. The trick is to design commercially available oligonucleotide libraries that are then amplified after adding primers purchased with fluorophores attached to them. Advances in DNA synthesis have dropped the price of oligonucleotides, an opportunity seized by the Wu lab.

The proof of principle provided in the paper is “a huge event,” said R. Scott Hawley, American Cancer Society Research Professor at the Stowers Institute for Medical Research in Kansas City. He was not involved in the study.

“This will change the way we do things in my lab,” said Hawley, who studies cell division in Drosophila chromosomes. “We’ll be able to follow chromosomes in a way we’ve never been able to follow them before: more efficiently, easily and elegantly.”

Kim McKim, a professor of genetics at Rutgers University who also works in Drosophila, is eager to use Oligopaint probes. He also played no part in the study.

“Can’t wait to get them,” he said. “Having a tool like this, which allows one to specifically examine the positions of a specific chromosome in a cell, is incredibly valuable.”