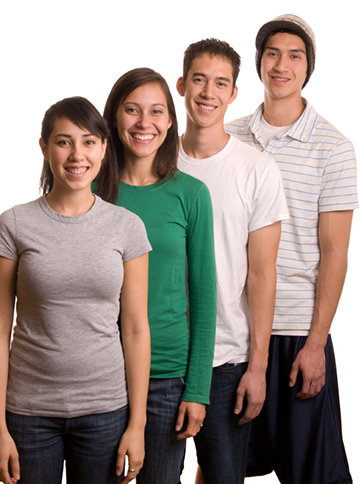 The largest genome-wide association study to date, involving more than 300 institutions and more than 250,000 subjects, roughly doubles the number of known gene regions influencing height to more than 400.

The study, from the international Genetic Investigation of ANthropometric Traits (GIANT) Consortium, provides a better glimpse at the biology of height and offers a model for investigating traits and diseases caused by many common gene changes acting together.

The findings were published online Oct. 5 in Nature Genetics.

“Height is almost completely determined by genetics, but our earlier studies were only able to explain about 10 percent of this genetic influence,” said Joel Hirschhorn, professor of genetics at Harvard Medical School and the HMS Concordia Professor of Pediatrics at Boston Children’s Hospital, leader of the GIANT Consortium and co-senior investigator on the study.

“Now, by doubling the number of people in our study, we have a much more complete picture of how common genetic variants affect height—how many of them there are and how much they contribute,” added Hirschhorn, who is also an associate member of the Broad Institute of MIT and Harvard.

The GIANT investigators, numbering in the hundreds, shared and analyzed data from the genomes of 253,288 people. They checked about two million common genetic variants—those that showed up in at least five percent of their subjects. From this pool, they pinned down 697 variants in 424 gene regions as being related to height, the largest number to date associated with any trait or disease.

“We can now explain about 20 percent of the heritability of height, up from about 12 percent where we were before,” said co-first author Tonu Esko, HMS research fellow in pediatrics at Boston Children’s, postdoctoral research fellow at the Broad Institute and scientist at the Estonian Genome Center at the University of Tartu, Estonia.

“The study also narrows down the genomic regions that contain a substantial proportion of remaining variation—to be discovered with even larger sample sizes,” added co-senior investigator Peter Visscher of the University of Queensland, Australia.

Height is a model trait for understanding how human genetics works—especially for traits produced by not one gene, but many. Height is easy to measure, and an estimated 80 percent of variation in height is genetic.

Previous large-scale genome-wide association studies (GWAS) have indicated that a large number of genes influence height and suggested that the majority of heritability comes from common genetic variants, not rare ones. Because sample sizes have not been large enough to draw definitive conclusions, the GIANT team built the largest sample to date.

“When you double the sample size and increase your statistical power, you can make new discoveries,” said Hirschhorn. “Our results prioritize many genes and pathways as important in skeletal growth during childhood. Without a highly collaborative model, there’s no way we could get this work done.”

The researchers believe their results answer critics of population-scale GWAS who have argued that increasing the sample size yields diminishing returns or results that become meaningless.

“In 2007 we published the first paper that identified the first common height gene, and we have now identified nearly 700 genetic variants that are involved in determining height,” said co-senior investigator Timothy Frayling of the University of Exeter, U.K. “We believe that large genetic studies could yield similarly rich lists in a variety of other traits.”

The biology of height

Many of the 697 height-related genetic variants were located near genes known to be involved in growth, but there were also plenty of surprises.

“There were some pathways that we knew were important but had not come out in previous GWAS,” said Hirschhorn, who is also an endocrinologist at Boston Children’s. “Many of the genes we identified are likely to be important regulators of skeletal growth but were not known to be involved until now. Some may also be responsible for unexplained syndromes of abnormal skeletal growth in children. As you increase the sample size, you get more biology.”

For example, the mTOR gene is well-known to be involved in cellular growth but had not previously been connected with human skeletal growth. Other genes confirmed as important include genes involved in metabolism of collagen, a component of bone, and chondroitin sulfate, a component of cartilage, as well as networks of genes active in growth plates, the area of growing tissue near the ends of the long bones. Still other genes point to biology whose relationship with height isn’t yet known.

Among GIANT’s future goals is to look at variants that occur at lower than five percent frequency and to look for variants in the non-protein-coding portions of genes.

The study’s numerous funding sources included the March of Dimes and grants from the National Institutes of Health and many other countries. Full funding information is available online.