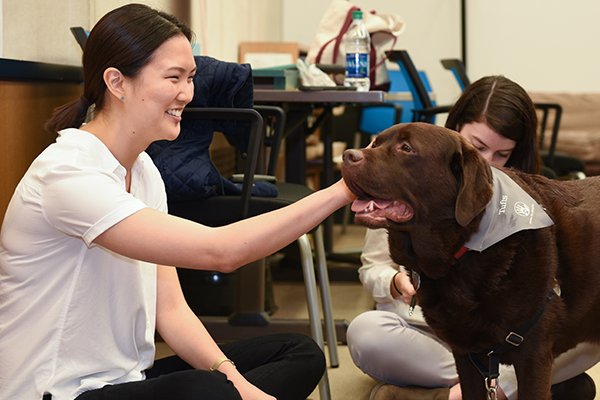 Sometimes de-stressing is as simple as playing with a fluffy, four-legged friend.

For more than four years, a shih tzu dog named Cooper provided a calm and friendly presence for Harvard Medical School students and staff visiting and working in the Francis A. Countway Library of Medicine. Cooper was a registered therapy dog who helped busy students decompress from the demands of medical school.

For many students, Cooper provided a bright spot in a stress filled week.

“It could be as simple as sitting down with Cooper and having that one on one time, with no judgments,” said Erika Nosike, an access service specialist at the library.

Last winter, however, Cooper disappeared from his home in Belmont, Mass. In the months since, many at HMS have felt the effect of Cooper’s absence.

To honor and continue the positive impact Cooper had on the HMS community, the Countway Library is bringing back two new therapy dogs. Starting in October, every Friday there will be a therapy dog in the library from 10 a.m. to approximately 2 p.m.

The addition of therapy dogs to college campuses comes in response to a growing awareness of the positive benefits of student wellness initiatives. Some studies have shown that the pressures associated with medical school have been found to lead to increased levels of stress and anxiety, leading to burnout.

A 2006 study co-authored by Liselotte Dyrbye, co-director for the Mayo Clinic Physician Well-Being Program, found high prevalence of depression and anxiety among medical students and consistently high levels of psychological distress compared to peers in other fields. A 2014 study co-authored by Dyrbye found that medical students and physicians experience more instances of burnout than their peers in other fields.

The reintroduction of therapy dogs to the Countway Library is the first of several wellness-centered programs to come.

“We really are hoping that this is the beginning of making Countway a more comfortable, inviting place to come, rather than people thinking of it as the typical library where you study or check out a book. We want it to be more than that,” said Meredith Solomon, outreach officer for the library.

The library is working with Tufts Paws for People and a nonprofit called Dog B.O.N.E.S. Both organizations help facilities such as hospitals, nursing homes and universities implement dog therapy programs.

According to Tufts Paws for People, therapy pets offer many benefits. Their companionship and calming presence has been found to lower blood pressure and help relieve stress and anxiety.

“It’s an unbiased participant. There is no judgment. They’re fun, they’re friendly, and they do have a calming effect,” said Solomon.

Miranda Mancusi works in the Harvard T.H. Chan School of Public Health and is the owner of a therapy dog named Jeter.

Jeter is a 5-year-old chocolate Lab, who will be visiting the library every other Friday, opposite Teddy, a 5-year-old coton de Tuléar.

“He’s just so happy to see everybody, and people are happy when they see him,” said Mancusi.

Library officials said students are welcome to come by and spend time playing, relaxing and de-stressing with the dogs.

“We have the ability to start and continue programs such as this one, to collaborate on programs with internal as well as external organizations, and to improve the health and wellness not only of the students but of the staff and faculty too,” said Solomon.

Looking forward, Solomon said she hopes to increase the number and variety of therapy dogs spending time in the library.