From Dairy Cultures to Dazzling Technology 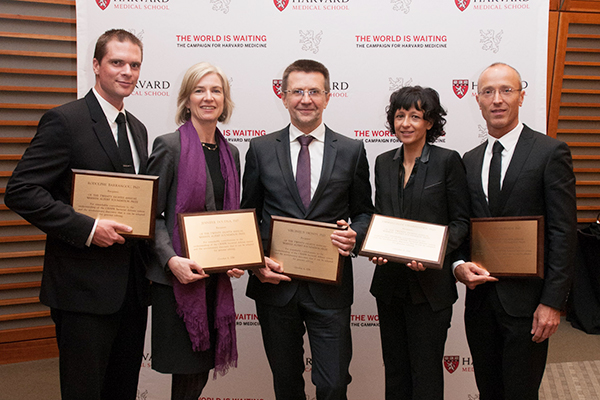 From its humble beginnings in cheese and yogurt fermentation to its rise as a genome editing technology that has taken the scientific world by storm, CRISPR took center stage at Harvard Medical School’s 2016 Warren Alpert Foundation Prize Symposium.

The Oct. 6 symposium, “The CRISPR/Cas9 Revolution and Gene Editing,” held in the Joseph B. Martin Conference Center with a standing-room-only crowd, featured talks by the five researchers who received this year’s prize.

“The story of CRISPR can be thought of as a book series like Harry Potter or The Lord of the Rings—really, mystery and magic went on as this system was revealed and is now being used to drive amazing science,” said symposium moderator John Mekalanos, the Adele Lehman Professor of Microbiology and Molecular Genetics and former chair of the Department of Microbiology and Immunobiology at HMS.

Rodolphe Barrangou of North Carolina State University and Philippe Horvath of DuPont gave a joint presentation about the early history of CRISPR and the eureka moment they experienced during what they called the Middle Ages of CRISPR research in the early 2000s.

While studying different strains of the dairy-culturing bacterium Streptococcus thermophilus at DuPont, they realized that there might be a connection between the odd, repeating regions in the bacteria’s genomes (CRISPR), the unique DNA segments sandwiched between those regions, and the bacteria’s resistance to particular viruses.

Barrangou and Horvath described how their follow-up experiments showed that bacteria use CRISPR and the related enzyme Cas9 to build adaptive immunity by cutting up segments of the invading viruses’ DNA and incorporating them into their own genomes.

The researchers also talked about how they and others went on to adapt CRISPR to easily distinguish and tag different strains of bacteria, kill particular strains within a mix of bacteria and systematically inoculate bacteria against specific pathogens, all of which has had a “tremendous impact” on industry, said Barrangou.

“If you’ve eaten once slice of cheese, one cheeseburger or one bite of yogurt since 2011 on a global basis, you’ve been CRISPR-enhanced,” he said.

“In my lab we didn’t know how to make yogurt or cheese, but we wanted to understand how CRISPR provided interference against invading phages,” said the next speaker, Virginijus Siksnys, of Vilnius University.

After obtaining a strain of S. thermophilus from Horvath and Barrangou in 2007, Siksnys transferred one of the bacterium’s CRISPR systems into E. coli. His experiments showed that Cas9 is the only enzyme required for CRISPR to disable pathogens.

Before describing how CRISPR research began to evolve from mechanistic studies of microbial immunity to new gene-editing tools, Siksnys noted that he was pleased to share a national heritage with the late Warren Alpert, who was born in Chelsea, Massachusetts, to Lithuanian immigrants.

Emmanuelle Charpentier of the Max Planck Institute and Umeå University, whose interest lies in bacteria and bacterial diseases, described how studying the bacterium Streptococcus pyogenes revealed that Cas9 is guided to the target DNA by two RNA molecules: CRISPR-targeting RNA, or crRNA, and trans-activating crRNA, or tracrRNA.

“CRISPR/Cas systems are really, really exciting, and a lot of my colleagues are doing a great job trying to understand the exact mechanisms of maturation of the RNA interference,” she said.

Charpentier also talked about how CRISPR is in turn improving researchers’ understanding of S. pyogenes, which can cause human diseases ranging from tonsillitis and scarlet fever to necrotizing fasciitis (flesh-eating disease) and toxic shock syndrome.

The future of CRISPR

Jennifer Doudna of the University of California, Berkeley, said she was drawn to the CRISPR field by her scientific interest in how RNAs work. Among the discoveries she outlined were finding RNA-targeting systems with CRISPR/Cas and using Cas9 to image RNA molecules in living cells.

“It’s been fun to see all the creative work coming out of labs thinking about how to use these systems not just in gene editing but in other manipulations” that span medicine, industry, agriculture, biotechnology and beyond, she said.

Turning to the leading edge of CRISPR research and potential future applications, such as human embryo manipulation, Doudna emphasized the importance of engaging non-scientists in discussions about what the technology can and should be used for.

“I’ve been actively involved in these conversations, along with George Daley and George Church and many others here and elsewhere, to think about how to move forward in a responsible way, to think about this together and not dive into the unknown without careful thought,” she said.

Doudna, who received her PhD at HMS in the lab of genetics professor and Nobel laureate Jack Szostak, also said it was “a great pleasure to be back where I consider my scientific home.”

“Fundamental, curiosity-driven research is really what underscored and made possible the evolution of this technology,” she said. “It’s exciting and certainly a principle I learned as a student here.”

The program concluded with two additional glimpses into the future of CRISPR.

Luhan Yang of eGenesis, who received her PhD at HMS in the lab of Robert Winthrop Professor of Genetics George Church, described ongoing efforts to rewrite the pig genome to reduce or eliminate immune complications when trying to grow organs that could be transplanted into humans (xenotransplantation).

“The discoveries made by the scientists who share this year’s prize have been profound, and their implications will undoubtedly advance our ability to understand and treat disease,” said Barbara J. McNeil, acting dean of the Faculty of Medicine at Harvard University and a director of the Warren Alpert Foundation, at the symposium.

“Our five prize winners join a large group of people throughout the world who have made contributions to this area, but really they have crystallized through their early observations in this system the innovations that were required to see CRISPR blossom in the hands of so many investigators,” added Mekalanos, who is also a member of the Warren Alpert Foundation Prize scientific advisory committee.

The story of CRISPR “spans basic to applied science in the most dramatic ways,” said Mekalanos. “Like all of you, I look forward to the next chapter as it develops.”

The Warren Alpert Foundation Prize recognizes one or more scientists whose scientific achievements have led to the prevention, cure or treatment of human diseases or disorders, or whose research constitutes a seminal scientific finding that holds great promise of ultimately changing our understanding of or our ability to treat disease. Nominations are open until Oct. 31 for the 2017 prize.