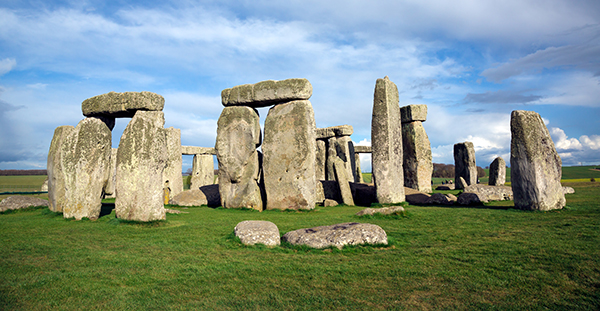 New analyses reveal that about 90 percent of the population of what is now Britain was completely replaced just after the major megaliths at Stonehenge were erected. Image: Onfokus/iStock

The science of sequencing DNA from the remains of ancient humans continues to grow by leaps and bounds. In the last eight years, the field has expanded from just one ancient human genome to more than 1,300.

About 800 of those genomes were released in a trio of Nature papers from vast international research teams led in part by geneticist David Reich at Harvard Medical School. Two of the papers appear online Feb. 21, including the largest-ever study of ancient DNA; the other paper was published in Nov. 2017.

Reich sat down with Harvard Medicine News to discuss the significance of these studies as well as what he’s most excited about now that ancient DNA research has reached the next level in its own evolution.

REICH: One answer is that, when we have many, many hundreds of samples from a small region, we can for the first time look in exquisite detail at the genetic variation within that region and how it changes over time. We can test whether there are differences between closely related material cultures.

This makes it possible to write down mathematical models for how change occurs over time in human populations. Archaeologists, I think, have been a little bit doubtful of our papers because we were making statements based on a few samples. Now we’re getting into enough granularity to have real conversations.

The second answer to your question is that we can study biology. We can see in high resolution how genes that affect complex traits like height or diabetes risk change over time. It’s also clear from our data that the mutation for digesting cow’s milk only became common after 4,000 years ago in Europe and probably came from the east.

HMS: Do you worry about running out of samples?

“Europe harbors only a tiny fraction of the untold stories about humanity that are hidden underground.” —David Reich

REICH: There are millions of skeletons from the period and region we’re studying. And then Europe harbors only a tiny fraction of the untold stories about humanity that are hidden underground. It’s been possible to access skeletal material sooner in Europe than in other places because of the high degree of organization in the archeological community there and the extensive specimen collections. That doesn’t mean the questions are any less important elsewhere, and certainly we and others will try to address them.

HMS: What, for you, is the most exciting discovery from these three particular papers?

REICH: There are some amazing findings. The most dramatic is in the Beaker paper. It contends with this extraordinary archaeological culture, the Bell Beaker Complex, that is first documented in western Europe about 4,700 years ago and spread into central and northern Europe by 2,500 years ago. It was variable from region to region, but they shared features in their graves, including open-mouthed pots and people buried in certain configurations. In preparing the supplement to the paper, I just kept seeing one burial description after the other, beaker buried near the head, beaker buried here, beaker buried there. The women buried one way, the men the other way. The women with little buttons, the men with archer’s wrist guards.

So the question has always been, what propelled this spread? Was it movements of people or was it spread of this belief system, or some combination?

We got data from more than 200 people from representative regions nearly everywhere the Beaker Complex was found—from Spain and Portugal to central and eastern Europe, from Italy and Sicily to Britain and the Netherlands. And we found that these populations were genetically heterogeneous. We found sites in Hungary and France where people with different ancestries, basically multiracial groups of people, are buried side by side with Beaker pots by their heads.

We found that the Beaker population in Iberia was genetically very different from the Beaker populations in central Europe. A very similar culture was shared by two biologically distinct groups. And the Iberian Beaker samples were genetically indistinguishable from the non-Beaker Iberians they lived among. One possible explanation is that a subgroup of people in Iberia developed a belief system that was different from that of their neighbors.

That would make the Beakers unlike other well-documented ancient cultures that have been studied with DNA, such as the Corded Ware and Linearbandkeramik complexes and early European farmers and hunter-gatherers. (With bigger sample sizes, though, we’re now seeing that even those are not as homogeneous as we thought.) That’s exciting because archaeologists have spent a lot of time trying to find cases in which material cultures and artifacts do not track one-to-one with populations. The Beakers are a clear case.

HMS: You also uncovered some startling information about population replacement in Britain right when Stonehenge was being built.

REICH: That was one of the most moving things we found. When the Beaker phenomenon spread to Britain for the first time, about 4,400 years ago, it arrived through a movement of people rather than ideas. We see the footprint in the DNA. People in Britain had no ancestry from the Eurasian steppe before this time period. Then the Beakers arrived and there was immediately 90 percent steppe ancestry. That means at least 90 percent of the entire population of Britain was replaced within a few hundred years. It was a huge event.

HMS: Whose job is it to figure out what happened?

REICH: I think it’s the archaeologists’ job. What we geneticists can do is document what happened in terms of movements of people. Then archaeologists can develop models for why and how changes in culture happened.

Ancient DNA is a new scientific instrument that needs to be put into the hands of archaeologists. Writing papers like these, which are intense collaborations between geneticists and archaeologists, is a chance to bring these communities together.

HMS: What happens when not everyone in those communities welcomes your findings or their implications?

REICH: There’s a history in archaeology of being suspicious of claims of mass migration and of conflation of peoples and material cultures because the Nazis heavily abused theories like this for propaganda in the Second World War. The consensus even through the last decade has been that claims of major migrations in prehistory are usually wrong and that changes are usually propelled gradually.

But the genetic data are sternly clear: There can indeed be sudden and dramatic population changes precipitated by migrations, and this occurred frequently in the human past. These are the facts, and they are ideologically and politically challenging. They upset some of the things archaeology students are taught. But it’s exciting to be a part of these discoveries.

HMS: Do you think knowledge is increasing such that it’s easier to say, “This is what really happened?” Or can we still be biased by politics and cultural desires?

REICH: Of course we can still be biased. But in our time, I think this technology has been a force for exploding stereotypes. Prehistory is so complex that, again and again, our predictions have been wrong. We always find surprises when we look directly at the data. It shows the power of rich, large sample sizes over time and space. You have to check your stereotypes at the door, because what we’re seeing is beyond anything we could imagine.

“It’s like turning on an electric light in a dark cave where before there were only small wavering candles.” —David Reich

HMS: What are you looking forward to finding out as more samples become available?

REICH: I’d like to know whether, as human lifestyles changed with the introduction of agriculture and urbanization and industrialization, the nature and rate of natural selection also changed. Are the same types of genes selected for? Were immunological genes as important in the past as they are now? There are all sorts of interesting questions to ask.

HMS: What else do large sample sizes reveal about archaeological sites?

REICH: One thing is the detection of relatives. We’re finding fathers and daughters and other relatives spread over multiple graveyards tens of kilometers apart, which reveals something about how families got distributed. We’re finding whole tombs full of first-degree relatives, mothers, fathers, kids, and sometimes half-siblings, people who are having kids with two different people.

We can determine matrilocality and patrilocality—whether women are staying in the same place and the men are moving, or vice versa. In Bulgaria, we measured what happened in places where farmers mixed with hunter-gatherers instead of replacing them. In the south, it seems to be mostly women hunter-gatherers being integrated into farmer societies. In the north, it’s women farmers being integrated into hunter-gatherer societies. That finding reveals something profound about the interactions between these two cultures.

Or in the Peloponnese in southern Greece, we see early farmers whose ancestry is different from that of other farmers in northern Greece and Europe. That tells us for the first time that there were multiple pulses of farmers moving from Asia into Europe. Before now, the data had been consistent with a single ancestral group giving rise to all European farmers.

All of these things and more, we can discern because of these rich data. It’s like turning on an electric light in a dark cave where before there were only small wavering candles.