Come One, Come All

Developing a pan-coronavirus vaccine is a worthwhile, if challenging, endeavor, scientists say 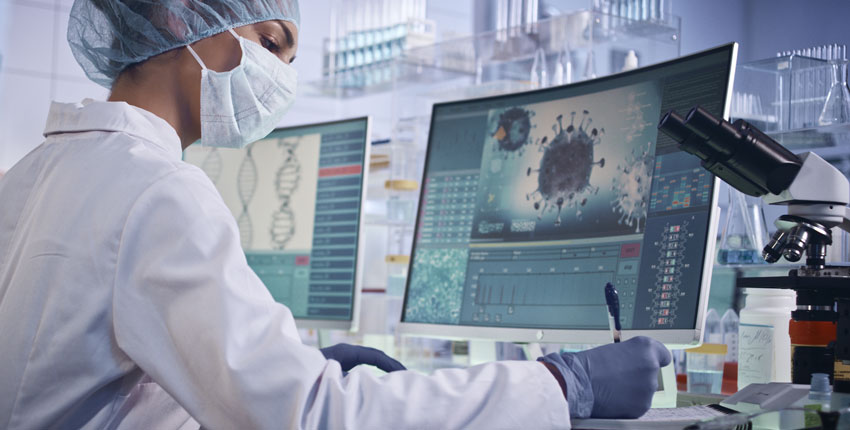 As SARS-CoV-2 swept across the world in 2020, scientists worked furiously to develop vaccines that could stop the spread—or at least stave off the worst symptoms of COVID-19. In record time, multiple companies developed effective vaccines that have prevented countless deaths as the pandemic has stretched on.

However, as research continues on how to modify and improve the existing vaccines against SARS-CoV-2, scientists have set their sights on an even more ambitious goal: a pan-coronavirus vaccine that would work against multiple coronaviruses.

Hoist with Its Own Petard

New research suggests way to turn SARS-CoV-2 against itself

“Coronaviruses are a potential existential threat to humanity, and so figuring this out is of highest priority,” said Bruce Walker, the HMS Phillip T. and Susan M. Ragon Professor of Medicine at Massachusetts General Hospital and faculty co-lead of the Massachusetts Consortium on Pathogen Readiness, or MassCPR.

In 2002 and 2003, SARS-CoV spread across several continents, and in 2012, MERS-CoV emerged in the Middle East. Both coronaviruses, like SARS-CoV-2, belong to the betacoronavirus group and can cause severe respiratory illness.

“Given that there have been three pandemic coronaviruses, there will almost certainly be more,” said Dan Barouch, HMS William Bosworth Castle Professor of Medicine at Beth Israel Deaconess Medical Center and co-lead of vaccines research at MassCPR.

“Wouldn't it be good to have a vaccine that had broad coronavirus activity and might be able to prevent or very quickly eliminate the next coronavirus pandemic?”

In a recent perspective in the New England Journal of Medicine, “Universal Coronavirus Vaccines—An Urgent Need,” NIAID Director Anthony Fauci and co-authors make a powerful case for the scientific pursuit of this effort.

Researchers agree that as tantalizing as the idea is, developing a pan-coronavirus vaccine presents a considerable challenge. Such a vaccine would have to elicit broad and lasting immunity against viruses that, while related, also differ considerably, including coronaviruses that have not yet emerged.

Which raises the key question: What will it take to design an effective pan-coronavirus vaccine?

According to Barouch, a few different strategies could be used to make a pan-coronavirus vaccine. One possibility would be to simply combine genetic material from a representative of each subgroup of pathogenic coronaviruses into a single vaccine.

“If you mix them all together, maybe you end up with a vaccine against the entire class,” Barouch said.

Alternatively, researchers could use computational experiments to design viral protein sequences that represent the various coronavirus subgroups. These synthetic sequences could then be combined into a vaccine.

Yet another option would be to investigate which protein regions are conserved across coronaviruses and use them as a basis for a vaccine.

“These are all intellectually valid approaches, but they have to be tried, and there’s no proof of concept yet in humans,” Barouch said. “I don’t think there’s a single idea that’s ready to go the distance, so there will likely be multiple ideas tested in animals and early-phase clinical trials.”

His own research focuses on combining multiple immunogens—molecules that induce an immune response—to represent the entire subgroup of coronaviruses called sarbecoviruses, which includes SARS-CoV and SARS-CoV-2

A pan-coronavirus vaccine would ideally elicit a strong immune response on two fronts: antibodies and T cells, which offer different types of protection.

Neutralizing antibodies are small immune proteins named for their ability to actively neutralize invading pathogens. These antibodies are the most effective way of preventing infection, which they accomplish by binding to key regions on the surface of the virus so it can’t enter a cell and replicate.

However, neutralizing antibodies typically bind to only a few variable regions on a virus that tend to change quickly as a virus mutates, so antibody response is generally not durable across variants or viruses.

In the case of SARS-CoV-2, neutralizing antibodies elicited by vaccines primarily latch onto two regions on the spike protein of the virus. Yet the spike protein has mutated considerably with each variant, making those antibodies less effective against newer variants such as omicron.

By contrast, non-neutralizing antibodies are generally less powerful in their ability to counter pathogens. These antibodies typically bind to regions of the virus that are more conserved across variants or viruses, but binding to those conserved regions isn’t as effective at blocking viral replication.

T cells offer a different kind of protection. With SARS-CoV-2, for example, they respond to many regions on the spike protein, and thus have continued to react to new variants even as the spike protein has mutated.

However, T cells don’t prevent infection. Instead, they kill virus-infected cells and help clean up the aftermath of infection, which keeps the infection from taking hold and progressing to severe disease, explained Duane Wesemann, HMS associate professor of medicine, member of the Division of Allergy and Clinical Immunology at Brigham and Women’s, and MassCPR member.

For Walker, the T-cell response is particularly intriguing, since it can target multiple proteins made by the virus, including some that may be conserved across viruses.

One possibility, he said, would be to make a T-cell based vaccine that incorporates essential viral proteins that aren't spike proteins and that are mutationally constrained enough that they don’t change as the virus replicates. “To me, that’s a promising approach to something that’s more broadly cross-protective,” he said.

Any vaccine that attempts to target multiple viruses is going to be less specific, and thus less effective at warding off infection, than one tailor-made for a single virus. However, researchers say, perhaps that’s OK.

“Even if a vaccine had only moderate potency, it might be good enough to either stop a virus at its source, or significantly delay the introduction of the pandemic to the world,” Barouch said.

Walker agreed, adding that a reasonable goal is a vaccine that prevents severe illness and death, and results in asymptomatic or mild infection.

“A vaccine that prevents any infection by any coronavirus would be great, but I don't think that's realistic at this point,” he said.

Wesemann pointed out that a two-dose vaccine regimen for SARS-CoV-2 didn’t prevent infection from the omicron variant, but still largely prevented hospitalization and death.

Had these vaccines been available at the beginning of the pandemic, even at that lower level of effectiveness, the human toll and devastation would have been vastly diminished.

“I think countless lives would have been saved,” Wesemann said.

For Walker, a laudable—and perhaps more realistic—goal would be to develop a pan-coronavirus vaccine that needs to be given once a year, like the flu vaccine.

“The Achilles’ heel of these approaches is the fact that these viruses mutate and change, and in ways that are not entirely predictable,” Walker said, so a pan-coronavirus vaccine may need to be tweaked to keep up.

The researchers agree that an intermediate step on the way to a pan-coronavirus vaccine is one that works against all SARS-CoV-2 variants.

In fact, studies have shown that simply giving a third dose of an mRNA vaccine induces a broader and more even neutralizing antibody response across SARS-CoV-2 variants—a point that Wesemann explored in a recent commentary in Cell, “Omicron’s message on vaccines: Boosting begets breadth.”

A vaccine that prevents any infection by any coronavirus would be great, but I don't think that's realistic at this point.

To develop a pan-SARS-CoV-2 vaccine, Wesemann said, researchers must identify protein regions of the virus that are conserved across variants but elicit a strong enough immune response to make the vaccine effective.

To this end, there are conserved regions of the receptor-binding domain on the spike protein that may be a good place to start. Finding such regions across multiple coronaviruses, however, will be a tougher task, one that researchers have started to work on.

A Work in Progress

The vaccine consists of an iron-based protein called ferritin that has multiple faces, each of which is attached to a spike protein from a different coronavirus.

“The idea is to put a bunch of different viruses on a particle, kind of like an everything bagel,” said Wesemann, who is not involved in this vaccine effort.

He added that this kind of strategy for vaccine development is built for speed, as it involves trying different possibilities right away.

Wesemann leads a team that received one of three NIAID grants for research on pan-coronavirus vaccines. He is collaborating with Galit Alter, HMS professor of medicine at Mass General and co-lead of pathogenesis research at MassCPR, and Stephen Elledge, HMS Gregor Mendel Professor of Genetics and of Medicine at Brigham and Women’s Hospital and member of MassCPR, to study antibody response to the virus.

Wesemann’s work focuses on B cells, which produce antibodies that can recognize and respond to a virus.

More specifically, he is attempting to understand the fundamental aspects of this process, including how B cells are activated and transform into the plasma cells that actually secrete antibodies, how long plasma cells live and why they die, and how antibodies recognize different kinds of threats.

“There's a lot that can happen in our immune system, but what eventually happens is a tiny part of the possibilities,” Wesemann explained.

“If we can learn more about the full capabilities of the immune system and how it decides what it does, then maybe we can engineer a vaccine strategy that will elicit a broader immune response.”

Wesemann’s expertise in the immune system allowed him to quickly pivot into COVID-19 research at the onset of the pandemic. In fact, early in the pandemic he had to brush up on his phlebotomy skills so he could draw blood from patients with COVID-19 when phlebotomy centers were shut down.

In his work toward a pan-coronavirus vaccine, he is continuing research in humans to more fully understand immune response—and particularly B-cell response—to infection and vaccination.

He is also working in mice, where he is able to conduct experiments that manipulate the immune system. He sees his team’s methodical approach as complementary to an approach that involves immediately trying different options.

“Throwing things into people and animals gives us speed, and might give us something that works, and taking the immune system apart and figuring out how it works might illuminate a better vaccine strategy,” he said. “We need both of these approaches to be going simultaneously, in parallel.”

Undoubtedly, the huge investment of time and money in COVID-19 vaccines has renewed and bolstered interest in a pan-coronavirus vaccine.

Moreover, the pandemic has resulted in an enormous body of research on the immune response to SARS-CoV-2 and vaccines that may be relevant to other coronaviruses.

However, a pan-coronavirus vaccine is a difficult goal, and Walker only hopes the momentum will continue: “We’ve known for a long time that coronaviruses can cause really severe disease, and we can’t afford to let our research diminish as this pandemic comes under control, because we will undoubtedly be facing future threats.”