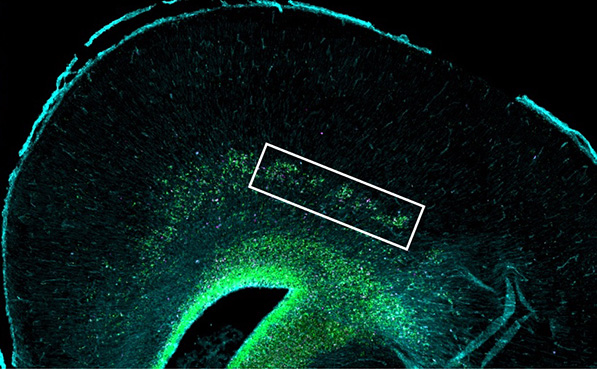 Neuron and glial progenitor cells, green, differentiate into outer radial glial cells (shown in box) earlier than normal in a ferret brain and accumulate in the secondary germinal zone. The result is fewer neurons generated and a smaller brain. Image: Matthew B. Johnson, et al.

Mouse brains are tiny and smooth. Ferret brains are larger and convoluted—and could provide the missing link in understanding how humans acquired big brains.

Children with microcephaly, whose brains are abnormally small, have a part in the story too. Microcephaly is notorious for its recent link to the Zika virus, but it can also be caused by mutations in various genes. Some of these genes have been shown to be essential for growth of the cerebral cortex, the part of our brain that handles higher-order thinking.

Reporting April 11 in Nature, a team led by Christopher A. Walsh of Harvard Medical School and Boston Children’s Hospital and Byoung-Il Bae of the Yale School of Medicine inactivated the most common recessive microcephaly gene ASPM in ferrets. This replicated microcephaly and allowed the team to study what regulates brain size.

“I’m trained as a neurologist and study kids with developmental brain diseases,” said Walsh in a press release from the Howard Hughes Medical Institute, which gave him a boost to his usual budget to support this work. “I never thought I’d be peering into the evolutionary history of humankind.”

Brain abnormalities as clues to evolution

This isn’t the first time Walsh, the HMS Bullard Professor of Pediatrics and Neurology and chief of the Division of Genetics and Genomics at Boston Children’s, has connected brain abnormalities with brain evolution.

His lab studied a brain malformation called polymicrogyria and found a gene involved in brain folding that may have enhanced our language ability. More recently, his lab explored the link between brain evolution and autism.

Walsh now leads the Allen Discovery Center for Human Brain Evolution at Boston Children’s Hospital and Harvard Medical School. The center was founded last year to catalogue the key genes required for human brain evolution and analyze their roles in human behavior and cognition. Microcephaly genes like ASPM are high on the list.

In humans, mutations in ASPM shrink the brain by up to half.

In seeking to understand ASPM’s role, mouse models don’t shed much light. A mouse brain is 1,000 times smaller than a human brain, and inactivating ASPM shrinks mouse brains by only about 10 percent. Mice also lack the diverse neural progenitor cell types seen in in the human brain.

So, the team turned to ferrets. Ferrets, which are members of the weasel family, have been used to model brain development for some 30 years, thanks to their larger, more convoluted cortex and ease of breeding.

When Walsh, Bae and colleagues inactivated ASPM, the animals’ brains shrunk by up to 40 percent in weight, similar to human microcephaly.

How to grow a brain

Human brain size has tripled over the last seven million years. Most of this growth has occurred in the cerebral cortex. Walsh, Bae and colleagues think the ASPM gene and the ASPM protein it encodes had a hand in this growth.

In the mutant ferrets, they found that ASPM inactivation throws off the timing of neural cell development. Normally, the ASPM protein helps keep neural progenitor cells known as ventricular radial glial cells (VRGs) in the primary germinal zone deep in the brain, where they replicate themselves and churn out more neurons and supporting glial cells.

“ASPM seems to make neural progenitor cells linger in the germinal zone, allowing them to divide more in place,” Bae, formerly a postdoctoral researcher in Walsh’s lab, said in a Yale press release.

“ASPM controls brain size by acting as a switch to control the number of stem cells in the brain, and this provides for the first time a way to envision how evolution can regulate brain size, through subtle changes in ASPM,” said Walsh.

The ASPM protein is part of a cellular structure called the centriole, a complex containing many proteins that is involved in cell division and early embryonic development.