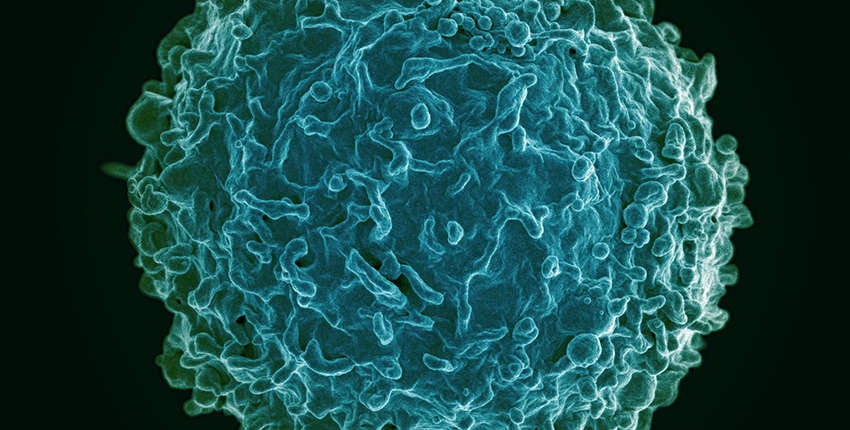 Researchers in the Blavatnik Institute at Harvard Medical School have pieced together the near-atomic structures of a pair of proteins crucial for B cell function—immune cells that produce antibodies and remember how to fight specific invaders long after an infection.

The work provides invaluable details that may guide the design of new therapies that disable dysfunctional B cells or boost the activity of healthy B cells to treat diseases such as lymphoma, immune deficiencies, and autoimmune disorders.

“There’s so much that’s unknown about what these kinds of proteins look like, what they do, and how their forms and functions are tied together,” said Katherine Susa, a graduate student in chemical biology in the labs of HMS structural biologists Stephen Blacklow and Andrew Kruse and first author of the study, published Jan. 15 in Science. “Our discovery is exciting both from a structural biology perspective and because it could have importance for fighting disease.”

When a B cell spots an antigen—a protein that indicates an enemy, whether a virus or a falsely interpreted signal from a person’s own healthy tissues—a protein on the B cell’s surface known as the B cell receptor latches on, hindering the invader’s ability to cause harm.

The attachment kicks another pair of proteins, CD81 and CD19, into gear. They come together to form the B cell co-receptor, which helps activate the B cell and makes its defenses about 1,000 times more effective.

But no one knew what the co-receptor looked like. Blacklow's and Kruse's groups had previously uncovered the structure of CD81, and another group had deciphered CD19, but it was possible that the two proteins morphed when they bound together.

Uncovering the co-receptor’s structural intricacies would provide a sharp image to help researchers design drugs that precisely bind to parts of CD81 or CD19—and bind only to them, reducing unwanted effects in the body. Although researchers have developed a handful of FDA-approved drugs so far that act on the co-receptor, they've been aiming at a blurry target.

Susa was determined to find the answer, but doing so wouldn’t be easy.

The co-receptor was too big for her to use nuclear magnetic resonance, a common structure determination technique. Yet, it verged on too small to image with another approach, cryo-electron microscopy. The proteins’ home in the oily cell membrane made X-ray crystallography a tricky proposition. Susa struggled, even with a game-changing technique Kruse had developed to prepare membrane proteins for crystallography.

So Susa paired up with Shaun Rawson, a computational specialist in the Harvard Cryo-Electron Microscopy Center for Structural Biology, who was ready to join in the challenge.

“The co-receptor isn’t the smallest object that’s ever been imaged with cryo-EM, but it’s certainly the smallest I’ve ever worked with,” said Rawson. “It offered a good challenge on several levels.”

The microscope, along with some innovative biochemistry, cracked the mystery.

“Cryo-EM enabled this work in a way that other structural techniques didn’t,” Rawson said.

Susa and colleagues were excited to find that CD81 “completely opens up and reorganizes” when it binds to CD19, she said.

The team discovered that the portion of CD81 that lies on the B cell surface unfurls to bind to CD19, while the portion embedded in the cell membrane twists closed to deny entry to cholesterol molecules.

Such changes have never been seen before in tetraspanins, the family of proteins that CD81 belongs to.

“People have thought tetraspanins are static. This shows they’re very dynamic and have multiple states based on whether cholesterol is bound,” said Susa. “That gives us insights into what they’re doing in the body.”

The work provides guidance for scientists trying to augment or reduce B cell activity as a way to treat disease.

For instance, one genetic mutation in the co-receptor is known to cause an immune deficiency. Activating those underperforming B cells could boost patients’ immune strength.

Conversely, certain cancers force the co-receptor to stay on, pushing B cells into a state of hyperactivity and proliferation. Modern CAR T-cell therapies destroy B cells to fight the cancer. Susa and colleagues’ work could enable researchers to develop drugs that kill only cancerous B cells while sparing healthy ones.

The work could have even wider clinical applicability if, as Blacklow suspects, other tetraspanins undergo similar structural changes on activation. His group has already started to investigate.

Blacklow receives funding for an unrelated project from Novartis; is on the scientific advisory board for Erasca, Inc.; is an adviser to MPM Capital; and is a consultant for IFM, Scorpion Therapeutics, and Ayala Pharmaceuticals for unrelated projects. Kruse is a co-founder and adviser on unrelated projects for the Institute for Protein Innovation, a nonprofit research institute, and a founder of Tectonic Therapeutic, a for-profit biotechnology company.