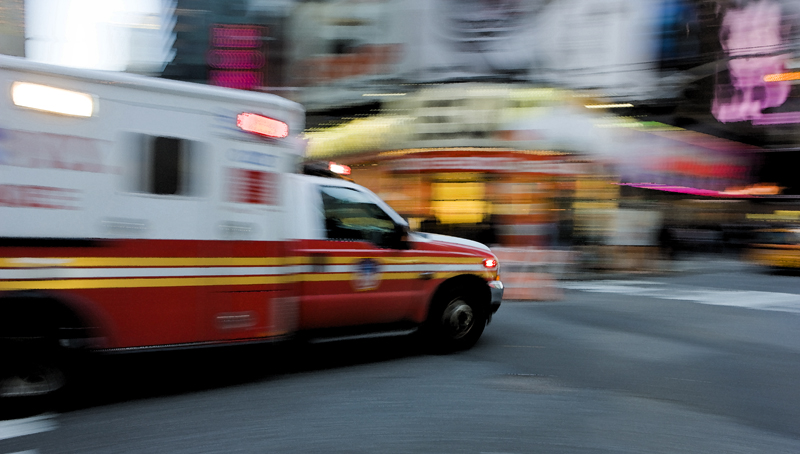 “We studied conditions that were representative of the major causes of death, where we thought we were most likely to see a benefit from the kinds of services that ALS provides,” said Prachi Sanghavi, a visiting research fellow in health care policy at Harvard Medical School and assistant professor in the Department of Public Health Sciences in the Biological Sciences Division of the University of Chicago.

“But what we found was that basic life support patients were more likely to survive, and more likely to have better non-survival outcomes, like neurological functioning,” he said.

The results are published in Annals of Internal Medicine.

Advanced life support ambulances are responsible for 65 percent of emergency care for Medicare patients in the United States and are dispatched preferentially for patients with life-threatening conditions.

The study analyzed outcomes for nearly 400,000 emergency patients from a 20 percent random sample of traditional Medicare beneficiaries from non-rural counties between 2006 and 2011.

They found that patients with acute myocardial infarction (or heart attack) were 5.9 percentage points more likely to survive for 90 days after their ambulance transport if they were transported in a BLS rather than ALS ambulance.

In addition to improved outcomes, greater use of BLS ambulances would also save money, the researchers said.

Using 2011 reimbursement levels of advanced life support and basic life support transport, they found that Medicare would have spent $322 million less on ambulance services in 2011 if all ground emergency rides had been BLS.

“This study demonstrates that in medicine, costlier isn’t always better; simply transporting the patient to the hospital as soon as possible appears to have a high payoff,” Newhouse said.

Faced with a patient in respiratory distress, an ALS crew might intubate the patient; a BLS crew in the same situation would use a bag-mask respirator.

The ALS approach—known as “stay and play”—takes longer to deliver patients to the hospital than the BLS “scoop and run” methodology.

There is scant evidence for the benefits of ALS transport, the researchers said, and some evidence that it is harmful to patients, including a study last year by the same team that showed better survival rates following BLS transport for patients with cardiac arrest.

The researchers used two distinct approaches to measuring the differences between ALS and BLS outcomes, in order to overcome any potential selection biases that might have been inherent in either model.

Both approaches generally found that BLS patients for the studied conditions had better survival rates than ALS patients.

This research was supported by a National Science Foundation Graduate Research Fellowship, the Agency for Healthcare Research and Quality (1R36HS022798-01), and the Office of the Director, National Institutes of Health (NIH Early Independence Award, 1DP5OD017897-01).