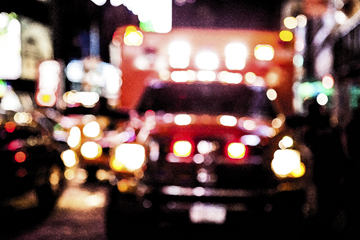 Lights flash, a siren wails and an ambulance races to help a person whose heart has stopped beating.

In most cases, a 911 dispatcher will have sent an advanced life support, or ALS, ambulance to the scene, equipped with sophisticated gear and staffed with a crew of highly trained paramedics who can deliver specialized care in the field, including intubations and IV interventions.

Unfortunately, according to a new study by health policy researchers at Harvard, those advanced techniques actually increase the patient’s risk of death.

People with out-of-hospital cardiac arrest who were treated by an ALS ambulance are more likely to die and to have poor neurological outcomes than those treated by basic life support, or BLS, ambulances, which use less-sophisticated treatment techniques, the study finds. The results are published today in JAMA Internal Medicine.

“Our study suggests BLS saves more lives than ALS, and therefore, the principles of BLS should be a priority for treating and transporting out-of-hospital cardiac arrest patients,” said Prachi Sanghavi, a PhD student in the Evaluative Science and Statistics concentration of the Harvard Program in Health Policy, and lead author of the study.

BLS ambulances provide a more limited set of treatments in the field and instead focus on rapidly transporting patients to the nearest emergency department. For example, instead of waiting to intubate a patient, they might provide air using a simple, hand-pumped ventilation bag.

“We know that community training, rapid and appropriate delivery of pre-hospital care, and high-quality hospital cardiac care may substantially improve these survival rates,” said study author Alan Zaslavsky, professor of health care policy at Harvard Medical School. “This study provides important insight about the choice between providing more care in the field and bringing patients as quickly as possible to hospital treatment.”

Since the 1970s, ALS has grown to become the predominant form of care for cardiac arrest and other medical emergencies in the US, but there is little evidence that ALS saves lives compared with BLS, and some research has suggested that the treatments and additional time associated with ALS may harm patients. In the current study, the researchers found that patients who received BLS instead of ALS were more likely to survive to hospital discharge, to 30 days, and to 90 days.

Of an estimated 380,000 cases of out-of-hospital cardiac arrest annually, 90 percent do not survive to hospital discharge, the researchers said. But at 90 days, BLS patients were nearly 50 percent more likely to survive than ALS patients. Basic life support was also associated with better neurological functioning among hospitalized patients, with fewer incidents of coma, vegetative state or brain death.

The researchers obtained a large, random sample of Medicare claims for patients in nonrural counties for ambulance services that occurred between 2006 and 2011. They compared survival and other outcomes between patients who received ALS and those who received BLS, using statistical methods to balance the two groups for characteristics such as age and other factors that might impact both the type of ambulance dispatched and the chances for survival. For example, older patients might be both more likely to receive ALS and more likely to die from cardiac arrest. The study adjusted for these possible sources of bias by studying comparable populations.

This research was funded by a National Science Foundation Graduate Research Fellowship and a Health Services Research Dissertation Award from the Agency for Healthcare Research and Quality, and by an Early Independence Award from the National Institutes of Health.