Zooming in on Transcription 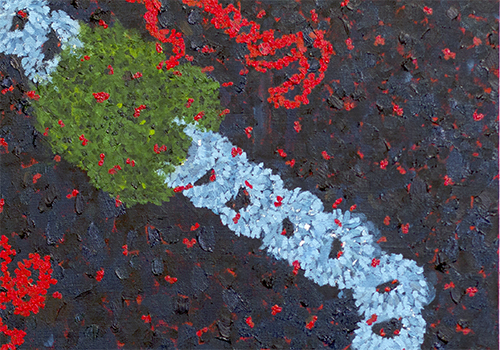 Once upon a time, scientists thought RNA polymerase—the molecule that kicks off protein synthesis by transcribing DNA into RNA—worked like a wind-up toy: Set it down at a start site in our DNA and it would whir steadily along, reeling off an RNA copy, until it reached the stop site.

“It’s more like a high-performance sports car,” said Stirling Churchman, assistant professor of genetics at Harvard Medical School. “It has to speed up, slow down and deal with obstacles in its path.”

Thanks to Churchman and colleagues, scientists can now watch how RNA polymerase navigates this obstacle course in human cells at high resolution.

Churchman had co-developed an RNA measurement tool called NET-seq a few years ago and used it to study gene transcription in yeast down to individual nucleotides (DNA “letters”). Churchman and team reported this week in Cell that they adapted NET-seq to do the same in human cells, permitting several new discoveries.

Gene transcription drives pretty much every process in our cells, yet there’s a lot that scientists still don’t know about how it works. Getting a better grasp of the details will improve their understanding of normal and abnormal biology, from cell differentiation to cancer.

First, Churchman found evidence that RNA polymerase really does change speed sharply in our cells. Other researchers had suspected this but had only been able to study it in simplified, modified systems outside the cell.

For example, Churchman and her team saw RNA polymerase slow down right before it reached particular obstacles called transcription factors—proteins that help RNA polymerase do its job.

Di Iulio discovered that RNA polymerase slowed down when it encountered DNA that would later become part of the final protein. (Many parts of the RNA copy produced during transcription get cut out, and the remaining bits get pieced back together before a protein is made.) No one had seen that before, Churchman said.

“The RNA polymerase was somehow detecting it was on DNA that would be retained,” said Churchman. “We saw this characteristic pattern of pauses like speed bumps before and after these DNA segments. We don’t know yet why they’re there or what’s causing them.”

Churchman wouldn't have been able to see the speed bumps with a lower-resolution tool because they happened so sharply, spiking and plunging within ten nucleotides.

Other researchers had seen this at specific places along the genome. The work of Churchman’s group indicated that it happens in as many as 25 percent of genes.

In short, the findings indicate that there’s a lot going on, said Churchman.

“There isn’t just the decision to turn a gene on or off; there are all these other control valves during the creation of RNA,” she said. “Ultimately, it emphasizes the simplicity of our current views of how transcription occurs.”

The study only scratches the surface of what NET-seq can help Churchman and others learn about gene transcription, she said. But every little bit helps.

“Anytime we can learn about a new way that genes are regulated, it has the potential to inform how we design therapeutics and how we can reverse disease states,” she said.

This work was supported by National Institutes of Health grants R01HG007173 and U54HG007010, a Damon Runyon Dale F. Frey Award for Breakthrough Scientists and a Burroughs Wellcome Fund Career Award at the Scientific Interface.