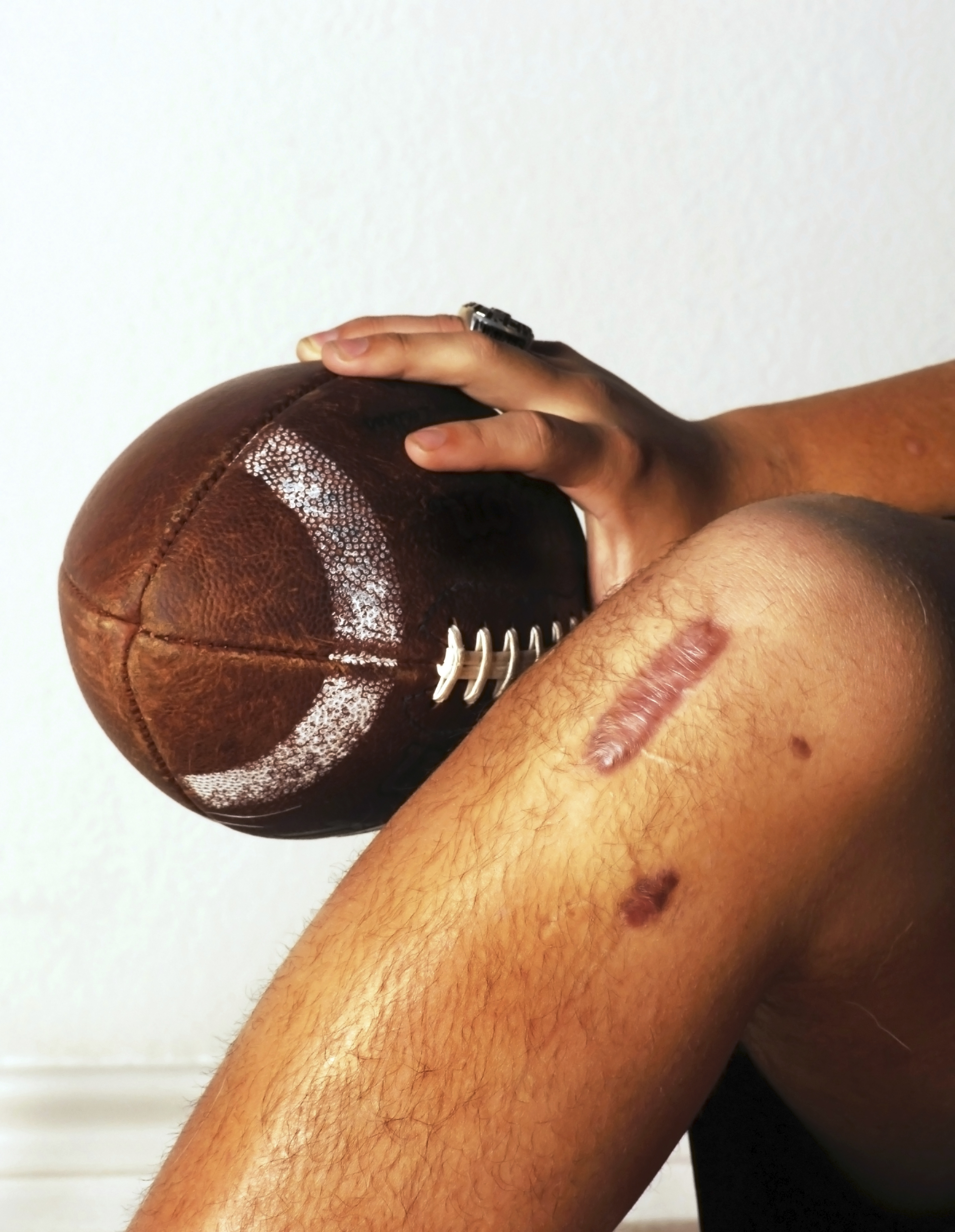 Despite disturbing headlines, what we actually know about football-related injuries, and their potential treatments, is limited.

We know that anterior cruciate ligament, or ACL, tears can lead to post-traumatic osteoarthritis in an estimated 80 percent of professional football players, often ending a player’s career, and that traumatic brain injuries are the most common neurological injury in sports.

But the wide range of serious medical risks continues to be of great concern among many professional athletes, resulting in a call to action for Harvard researchers.

The Football Players Health Study at Harvard University, a multiyear partnership with the NFL Players Association to study medical conditions affecting former NFL players, has launched a funding program that supports highly innovative and promising research projects that may have the potential to reduce the impact of the most serious and debilitating injuries threatening football players today.

Unlike traditional grants, this funding program requires each project to have clear milestones and to yield findings and actionable results within a year.

A Search for Answers

In early 2014, the first three studies—focusing on orthopedics, neurology and cardiology—were launched, each with $150,000 in grant funding.

The first, led by Martha Murray, HMS associate professor of orthopedic surgery at Boston Children’s Hospital, seeks a solution that allows a torn ACL to heal itself.

With no mechanism for self-repair, a torn ACL requires surgical reconstruction. Following surgery, however, athletes typically do not regain their pre-injury performance level and their careers are often cut short.

Currently in clinical trials, Murray’s technique allows the torn ACL to heal itself by using a bridge, or scaffold, to hold blood products between the two torn ends of the ACL long enough for surrounding cells to grow into and reunite the separated ends. In animal studies using Murray’s technique, not only does the ACL heal itself, but there is no resulting osteoarthritis, often a common consequence years after the initial injury.

In a second project that seeks to address the need for viable treatments for traumatic brain injury, a team of HMS investigators is developing a possible solution based on red/near-infrared light therapy.

Led by William Meehan III, HMS assistant professor of orthopedic surgery and pediatrics at Boston Children’s, and Ross Zafonte, the Earle P. and Ida S. Charlton Professor of Physical Medicine and Rehabilitation and the head of the Department of Physical Medicine and Rehabilitation at Spaulding Rehabilitation Hospital (both are co-investigators on the Football Players Health Study), and Mike Whalen, HMS associate professor of pediatrics at Massachusetts General Hospital, this project tests the current hypothesis that sustained recovery following a concussion relies on energy in the form of adenosine triphosphate, or ATP, an energy-carrying molecule found in all living cells.

Currently being tested in a double-blind randomized controlled trial, the researchers hypothesize that shining red/near-infrared light on brain cells following a concussion might result in a greater increase in ATP and, perhaps, in a faster recovery.

Margaret Naeser, a research professor of neurology at Boston University, and others, have published the results of preliminary animal studies and human trials in the Journal of Neurotrauma. Participants reported improved sleep and fewer post-traumatic stress disorder (PTSD) symptoms, and both participants and family members reported better ability to perform social, interpersonal and occupational functions.

Researchers undertaking the third project are seeking to advance research on myocardial dysfunction among football players. Directed by Aaron Baggish, HMS assistant professor of medicine at Mass General, the work focuses on football players as strength-trained athletes (as opposed to endurance athletes) who exercise and train in repetitive bursts of intense activity.

Baggish’s research explores how strength training may affect the heart, which can differ from the effects of endurance training. Strength training makes the heart walls stiff and inflexible, and challenges the organ to work harder to fill with blood.

In November 2014, a call for a second round of applications yielded 150 pre-proposals from research teams across Harvard University and its affiliated academic health care centers, 15 of which were invited to submit full applications.

In February, four teams from HMS were each awarded $150,000, and are scheduled to begin research by June 1.

Detecting Brain Movement within the Skull

Preventing traumatic brain injuries (TBI) in football is the aim behind a proposal developed by Gary Strangman, HMS associate professor of psychology in the Department of Psychiatry, and his team at Mass General. Working with co-investigators Quan Zhang, HMS instructor in psychology in the Department of Psychiatry, Adam Cohen, HMS assistant professor of neurology at Mass General and Brian Nahed, HMS assistant professor of neurosurgery at Mass General, Strangman developed an “on-the-field” non-invasive device, NINscan, or near-infrared neurophysiology, which monitors the movement of the brain inside the skull while players are in motion.

Monitoring the Movement of the Brain: Gary Strangman

Currently no device can do this. Accelerometers measure linear acceleration, gyroscopes monitor angular velocity and magnetometers track the movement of the head. Used jointly, these devices provide what is referred to as inertial head tracking.

Strangman is utilizing all of these devices, while devising a solution to mitigate their limitations.

“All of these devices measure the motion of the object to which they are attached—which could be the head, helmet or mouth guard. None are attached to the brain and, consequently, none can measure where or how fast the brain is moving or colliding with the skull. The brain does not move in lockstep with the skull, but we are currently blind to exactly how it does move, particularly in sports like football,” he explained.

Measuring the brain’s movement may be particularly helpful for better diagnosis of concussion, which occurs after impact, such as when the brain decelerates or rotates quickly.

Strangman, who is using a combination of accelerometers with near-infrared spectroscopy (NIRS) in his research, is encouraged by initial results that demonstrate the sensitivity of his NINscan system and its ability to monitor brain movement by tracking changes in cerebral blood volume.

“The goal is to monitor the entire head with a technology that sees through the scalp and skull, measuring how the brain is moving and morphing over time, millisecond by millisecond,” he added.

An overview of the Football Players Health Study at Harvard University.

After the mobile NINscan system is validated and optimized, it will be tested later this year on approximately 20 players from a local high school team. Ultimately, this patent pending technology could be worn by players on the field, recording the movement of their brains in real time and providing new data to complement existing g-force thresholds for TBI.

Because players are exposed to an onslaught of hits, jerks and twists, knees often bear the brunt of the damage, compromising the joint’s long-term stability. Approximately 43 NFL players per season suffer from ACL tears, with 65 injuries reported in the 2013 season alone. Current products on the market are either ineffective at preventing injury, or too rigid to be effective.

The idea for a new type of soft wearable bracing technology that could overcome the limitations of current rigid designs is the goal of Conor Walsh, assistant professor of mechanical and biomedical engineering at Harvard’s School of Engineering and Applied Sciences (SEAS), and Ata Kiapour, HMS research fellow in orthopedic surgery at Boston Children’s, who plan to develop a solution that can comfortably protect players while on the field without lowering athletic performance.

Walsh, who is also a core faculty member at the Wyss Institute for Biologically Inspired Engineering at Harvard University, has been leading efforts to design a variety of soft wearable robots in his research group, the Harvard Biodesign Lab.

Kiapour and Walsh have together conceived the design for a smart prophylactic knee brace, which they plan to develop with soft materials such as textiles and elastomers, while leveraging existing work by Walsh’s group to comfortably and effectively apply forces to the human body.

“On the field, players are moving in a highly dynamic manner and performing high-risk maneuvers such as cutting and landing. They are always looking for that extra inch, and so are hesitant to wear a brace that will restrict their motion, which then leaves them exposed to injury. The goal for this program is to develop a bracing technology that can provide protection but not restrict an athlete’s dynamic movements,” explained Walsh.

A team of students in the SEAS Medical Device Design course ES227 (Austin Chen, Paul Kaczor and Peter York), has already begun embracing the challenge. At the end of the year-long project, the team will provide a proof-of-concept design and validate it through lab experiments and some initial human studies.

In response to the high rate of post-traumatic osteoarthritis (PTOA) suffered by football players following joint injuries, a team of researchers at Brigham and Women’s Hospital has developed a self-titrating drug delivery system based on hydrogels.

“When injections are administered to a joint, they are often cleared by the lymphatic system, but due to the three-dimensional structure of this hydrogel, the drug can remain intact. Our vision is that this localized delivery platform would be injected following the injury, releasing the drug over an extended period of time in response to inflammation,” said Karp.

The key to this delivery system is the hydrogel which releases a drug on demand, in response to cartilage-degenerating enzymes and inflammation. The first aim of the project is to demonstrate that hydrogels can disassemble in response to these enzymes, while the second is to test the hydrogels in a mouse model of PTOA.

The goal in developing these hydrogels is to make available an affordable, scalable and easy-to-manufacture platform that could be adapted to treat other musculoskeletal injuries in addition to PTOA.

The fourth project is based on earlier findings that shed light on the inner workings of tau, proteins that stabilize microtubules and are abundant in neurons of the central nervous system.

Lu’s team, which includes co-investigators Xiao Zhen Zhou, HMS assistant professor of medicine at Beth Israel Deaconess, and Rebekah Mannix, HMS assistant professor of pediatrics at Boston Children’s, has developed a monoclonal antibody that detects and ablates the pathogenic cis tau protein. It could potentially be used as a treatment for traumatic brain injury and for preventing neurodegeneration associated with brain injury. Lu was recently awarded a $250,000 grant from the Alzheimer’s Foundation on related work.

As the researchers move through a series of development stages, testing and clinical trials, a critical intermediate step will be to secure continued funding for their work, especially in preparation for potential commercialization, which could make these prevention and treatment strategies available to players in need of groundbreaking solutions.

The Football Players Health Study, launched in 2014 in partnership with the National Football League Players Association, will continue to support both burgeoning and established research by hosting a series of ideation challenges, conducting working groups on relevant research topics and by making available additional funding opportunities.