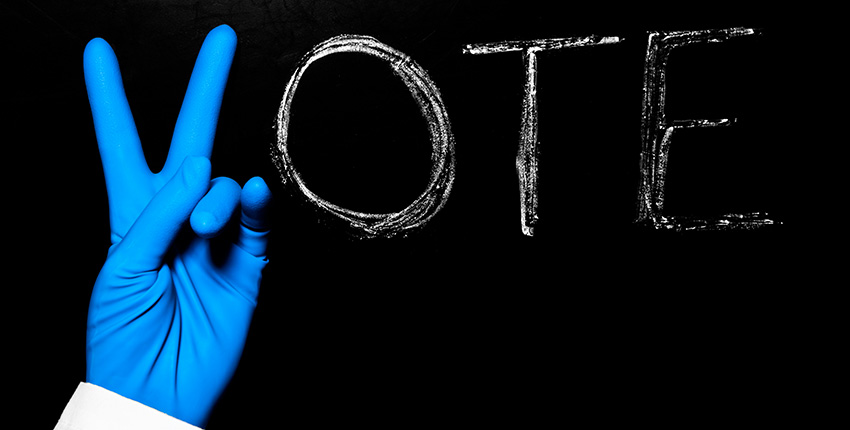 This year’s U.S. presidential election is now only weeks away and the outcome will have a significant impact on the country’s policies, both domestic and international. But even with resources and funding for health care so heavily affected by legislation and politics, some studies indicate that doctors and graduate students—including medical students—vote in lower numbers than the general population.

Now, a few HMS students are looking into whether increasing civic engagement among physicians and medical students might be a prescription for improving the health care system—and the health of the patients they serve.

Kusner has also been an active member of the HMS chapter of Citizen Physicians, working with fellow students at HMS, the Harvard School of Dental Medicine and the Harvard T.H. Chan School of Public Health on nonpartisan civic engagement and voting initiatives in the Longwood Medical Area. He is also a co-chair of MedOutTheVote, a voter mobilization initiative of the American Medical Student Association. He has written for and spoken with the media extensively about these issues.

Here, Kusner discusses how voting, and other kinds of civic engagement, can be empowering—and may improve health care and well-being for everyone.

HM News: Why are you so passionate about civic engagement and mobilizing the vote—and how does this intersect with your medical training?

So, if the current system is not well-designed for the health of these populations, and they're having their political voice stripped from them, how is this cycle going to change? I think that it's a role of health professionals to help break that cycle.

The way to do it is through nonpartisan voter registration, which is in line with patient-centered care, which empowers those individuals to be able to speak up, to be able to generate solutions that will impact them. Voter enfranchisement does that.

HM News: What do you say to physicians who say they don’t have the time or the expertise to mobilize the vote or be an advocate for civic engagement?

Kusner: We don't have to be the experts. We don't expect clinicians, physicians, any health professional, to be voter registration experts and know all the nuances for their states. They can direct patients through a QR code to high-quality resources, or they can put them in touch with somebody who has information.

It’s similar to other services that we already offer in health care, like making individuals aware of food resources or other social services that they qualify for. You qualify to vote if you're a citizen, and we should not only inform people of that, but make it available to them.

HM News: What is the rate of grad student and resident postdoc voter participation?

Kusner: Grad students in general have a lower voting rate than the general population. Medical students haven't been disaggregated from that, but we can imagine that they have the same pressures as other graduate students—full schedules and sometimes inflexible schedules. Often, because they have moved to a new community for graduate school and there aren’t systems in place to ensure their registration is up to date or to facilitate their absentee ballot requests, they can end up disenfranchised.

The same is true for residents and interns. Similarly, they are subject to disenfranchisement due to moving and inflexible working conditions. There's no systemic support for ensuring that they're in the system.

The good news is, we’ve seen a lot of offices of student affairs, the student-centric hubs within medical schools, be very energized by this work. We've seen a lot of support from students. We have seen a little less of it moving all the way up to medical school and hospital leadership, but we're going to get there. We’ve seen those individuals in leadership who are most in touch with students really signing on to the movement.

HM News: What are you and your medical school peers doing to boost civic engagement and mobilize the vote?

MedOutTheVote and VotER have gamified things by creating a QR code, or text code, for each med school. So, if I spread the HMS [QR] code, HMS will get credit for facilitating either voter registration or absentee ballot requests that used the code. That has established a leaderboard across the 80+ medical schools that are involved.

Through my involvement with VotER, nationwide we’ve activated 25,000 doctors; while the work of MedOutTheVote and VotER together has resulted in over 13,000 registrations and absentee ballots—facilitated by med students alone.

HM News: And what are you doing locally, here at Harvard?

We are rolling out HVC to our student bodies and making a concerted effort to provide voter registration resources and assist with absentee ballot requests. We're also putting on a speaker series in October that is interdisciplinary across the institution. Our first talk was with Dr. Alistair Martin. Our HVC Longwood team is supporting collaboration between our campuses by helping promote an upcoming DICP event on the political determinants of health.

In 2019, we hosted a panel featuring physicians who are doing a great job interlacing civics within their clinical roles; for instance we had Dr. Monica Mendiola who leads a mentorship program for underrepresented medical students considering OB-GYN residency and Dr. Robert Sinyard, a surgical resident who is interested in quality and safety. That panel was a part of the first-year social medicine course and was available to every first-year student.

We've done legislative advocacy, working with Sen. William Brownsberger's office to add a line item in Gov. Charlie Baker's budget. [Brownsberger is a Mass. state senator representing the second district in Suffolk and Middlesex counties.] [Brownsberger’s] district includes Vanderbilt Hall, so a lot of our students, before COVID, were his constituents, and we leveraged that in order to get him to make an amendment to Baker's budget that would keep a physician repayment program in Massachusetts.

Another thing Citizen Physicians has been able to do, in coordination with HVC, was get the HMS registrar to commit in 2020 to offer voter registration at the time of [student] orientation. Previously, Citizen Physicians had been offering voter registration at HMS, but it's not sustainable for students to be responsible for maintaining student body voter readiness year to year; the administration must step in for such scenarios, and fortunately, at HMS, it has.

HM News: What would you say to someone who says they feel that getting out the vote is partisan?

Kusner: The thing about partisan appearance is that the United States has had centuries of well-documented, deliberate, voter suppression that has been targeted demographically to exactly the populations we discussed before: minorities, the poor, the young.

As we do this work now, promoting participatory and broad-based nonpartisan voter enfranchisement, there may be regions where more individuals sign on to a specific ideology or have a specific idea about what would benefit them. That does not speak to the motivations of the people doing nonpartisan voter enfranchisement work. It speaks much more to the partisan motivations of past voter suppression efforts. It makes us aware of our history.

I encourage people not to shy away from this work for fear of partisan optics, because as long as you are doing it in a nonpartisan, nonissue-based way, you are helping to include more voices in our democracy. That is wonderful, wonderful civics work.

HM News: What do you say to people who don’t think their vote matters?

Kusner: I think I would offer encouragement [to vote] on a couple of bases. The first is that our system is changing and we need everyone’s perspective as a part of that change.

Secondly, I think we often focus a little too much on national politics. The state level dictates a lot of funding, like much of Medicaid funding and allocation. The national level will set standards across our nation, but it's the arena in which we have the smallest voice and may actually affect us the least.

We are most empowered at the local level and then at the state level. I would encourage everyone to get involved at those levels because it’s where we have the ability to organize with other constituencies and make substantial change. From a health standpoint, it's the local level that really affects the health of a lot of individuals in terms of food access, housing access and related issues.

So, I would encourage people who are feeling that their voice doesn't matter that a vote at the local level can truly swing elections and that voting is only a single dimension of civics. They can get involved in so many ways.

This interview has been condensed and edited for length and clarity.