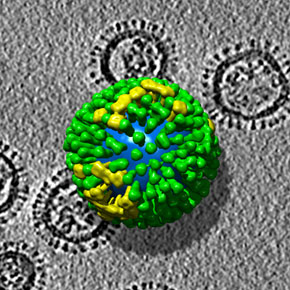 Viruses are biological pirates, invading cells and hijacking their machinery to reproduce and infect again. Research at Harvard Medical School is shedding new light on the battle line where viral and cell membranes meet, and the key role of a protein grappling hook with which the influenza virus commandeers its prize—your cells.

An influenza virus is a collection of eight RNA strands enclosed in a lipid-bilayer membrane. When the virus encounters a cell—in your lung, for example—that cell may engulf the virus inside an internal membrane called an endosome. To escape that bubble, the virus fuses its membrane with the endosome’s, opening a window into the cell’s interior. Once free, the viral RNA is copied, and the hijacked cell begins to manufacture copies of the virus.

To fuse the two membranes, the virus carries a protein called hemagglutinin (the “H” in H1N1). Triggered by the acidic environment of an endosome, that protein will extend from the viral membrane and attach, like a grappling hook, to the endosome’s membrane. When enough hooks are set, they draw the membranes together until they fuse

The flu virus carries about 300 to 400 of these hooks, and virologists had known that several are needed to fuse the membranes. In their latest study, reported last month in the new journal eLife, the HMS team show why.

Using a microscope developed by first author Tijana Ivanovic, a research fellow in the HMS Department of Biological Chemistry and Molecular Pharmacology, the team looked closely at changes in the protein throughout its assault on the endosome. They observed that three or four hemagluttinin hooks must attach in close proximity to fuse the membranes. Without the help of neighbors, an individual hook is too weak to pull the membranes together. Instead, they observed, the protein remains stretched between the two membranes, like a bridge.

And that’s an intriguing target, said Stephen Harrison, the study’s senior author and the Giovanni Armenise-Harvard Professor of Basic Biomedical Science in the department of Biological Chemistry and Molecular Pharmacology at HMS.

“That bridge can hang out there for as long as a minute,” Harrison said. “That makes it an interesting target for an inhibitor, in principle, at least, because it’s there for long enough to be targetable.”

The study also appears to settle a question about the nature of the hemagglutinin protein, and viral fusion: Are multiple hooks needed because they interact directly with each other to fuse the membranes, or because that’s the number required to pull the somewhat elastic membranes together by brute force? The researchers’ answer: brute force.

“That observation helps us distinguish between classes of models for a stage of the fusion process,” Harrison said. “That notion is probably fundamental to all viral fusion proteins—or for that matter to most cellular membrane fusion events facilitated by proteins.”

The research was funded by grants from the Howard Hughes Medical Institute, National Institutes of Health and AAAS/L'OrealWomen in Science.