Cells Seen to Invade Neighboring Cells, But Most Die in Host

Tracking the fate of “homeless” cells, Michael Overholtzer was watching human mammary epithelial MCF10A cells wander in suspension, free of their normal attachments, when he noticed something strange. Many of the drifters contained giant vacuoles that appeared to house whole cells. And these internalized cells were intact, an observation he later confirmed.

It was previously known that epithelial cells commit suicide if they are not anchored to the extracellular matrix. Overholtzer, a postdoc in cell biologist Joan Brugge’s lab, wondered if he had stumbled on a behavior that precedes or accompanies this death program. Could zealous cells be engulfing their dying neighbors, thereby aiding apoptosis? 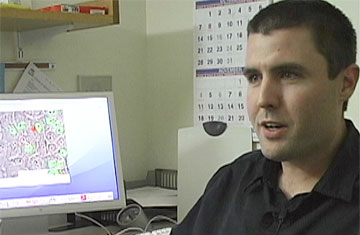 Further experimentation suggested that the initiators of the process were not the cells consuming their neighbors but the ones being consumed. Apparently, some MCF10A cells invade their neighbors instead of waiting to be eaten. Though a few of these intruders—which initially appear healthy—exit their hosts unharmed, most die inside the vacuoles.

In the Nov. 30 Cell, Overholtzer, Brugge, and colleagues document this bizarre behavior and non- apoptotic death process, and they give it a name, entosis, after the Greek entos, inside or within.

Overholtzer did not realize the implications of his initial observation until he crossed paths with a pathologist. When he presented the odd morphology to a small group of colleagues in 2005, his images resonated with Brigham and Women’s pathologist Andrea Richardson.

“I told Mike that the cytopathology literature is full of cell-in-cell references, particularly in connection with cancer,” said Richardson, who is an HMS assistant professor of pathology.

In 1904, for example, the scientist Leyden of the Post Graduate Institute of Medical Education Research in Chandigarh, India, described “bird’s-eye cells,” or tumor cells within other tumor cells. Researchers subsequently observed similar morphology in many different cancers, often employing the term “cell cannibalism” in their reports.

“Although these structures have been described by pathologists for decades, nobody knew how they formed,” said Brugge, who is chair of the Department of Cell Biology at HMS.

Motivated by the pathological connection, Overholtzer conducted additional experiments with the non- cancerous MCF10A cells. To eliminate the possibility that the cells were sitting on top of their neighbors, he imaged their three-dimensional architecture by confocal microscopy and applied a surface stain. After 12 hours, about 25 percent of cells were forming bird’s-eye structures, and 18.5 percent of these were protected from the surface stain, indicating they were completely enveloped.

Overholtzer collaborated with research fellow Guillaume Normand in Randall King’s lab to track the engulfment process. They were shocked to see cells boring into their neighbors after establishing junctions. Furthermore, the invaders appeared to be healthy, since they were devoid of apoptotic features such as irregular bulges in the plasma membrane and nuclear fragmentation.

The fate of these aggressors once they were internalized was even more surprising. Though most of them eventually died, some exited their hosts and swam off unharmed. Still others divided inside their vacuole, producing daughter cells—additional proof of the invaders’ viability. Overholtzer stained the suspended cells for a protease associated with apoptosis to confirm that it was not playing a role.

“Pathologists have speculated for years that some internalized cells are alive, and our data suggests they were right,” said Overholtzer.

Based on the pathologists’ observations, Overholtzer suspected that entosis extends beyond MCF10A cells. Indeed, a variety of human cell lines displayed the behavior when tested, including four of nine tumor lines. Cancerous MCF7 cells proved particularly prone to invasions with a whopping 30 percent of them housing neighbors. These odd couples invited additional experiments.

After 24 hours, 12 percent of the internalized MCF7 cells displayed massive cellular and nuclear degradation lacking apoptotic hallmarks. All of these cells were nestled inside vacuoles, and stains implicated lysosomal activity in their death. Overholtzer watched the vacuoles acidify as their inhabitants dissolved.

The initial contacts between MCF7 cells resemble the junctions established during normal epithelial compaction, when cells press against each other to form dense sheets. After two MCF7 cells in suspension touch, transmembrane proteins zip them together. E-cadherin plaques—identical to the ones observed during compaction—form at the edge of the moving junction.

As the interface continues to grow, the invader wraps the host around itself, a feat that requires force. Aggressor MCF7 cells lost their invasive powers when Overholtzer blocked the small G-protein Rho upstream of actin and myosin II, suggesting that entosis, like epithelial compaction, involves actomyosin contraction.

“The simplest explanation is that entosis is an aberration of normal epithelial compaction, since the cellular machinery matches,” Overholtzer explained. “The invasion could occur when you get unequal contractile forces between two unanchored cells.”

But he and Brugge cannot rule out other possibilities. Perhaps entosis represents a new type of programmed cell death that evolved for a distinct purpose. “It’s very difficult to know whether this is a cellular program with a normal role in development,” said Brugge.

Regardless of its origins, entosis shows up in the clinic. Overholtzer collaborated with Edmund Cibas, HMS associate professor of pathology at BWH, and Stuart Schnitt, HMS professor of pathology at Beth Israel Deaconess, to obtain fluid exudates and primary tumor tissue from breast cancer patients. Seven of eight exudate samples and 11 of 20 primary breast carcinomas displayed some cell internalization.

“This synergy between clinical diagnostic pathology and basic cell biology is incredibly exciting,” said Cibas, who is director of BWH’s Cytopathology Division. “Now we need to figure out if entosis helps or hurts cancer cells.”