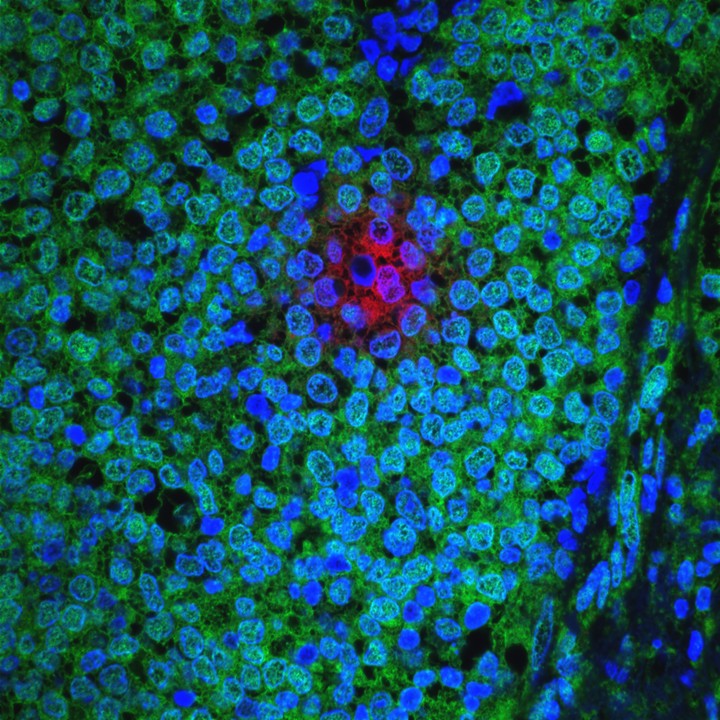 Cancer cells often devise ways to survive even in the presence of toxic chemotherapy. Now, a research team led by investigators at Harvard Medical School and Beth Israel Deaconess Medical Center has found a way to attack a process that tumor cells use to escape the effects of standard cancer drugs. The discovery appears online in the journal Nature Cell Biology.

Cancer drugs are no longer limited to toxic chemicals that can cause significant side effects. Many are specially designed targeted therapies that seek out and destroy cancer cells while sparing normal cells in the body. Currently, patients often receive a combination of these two approaches to ensure the best chance of treatment success.

Many targeted therapies in development act on the PI3K/AKT pathway, one of the most frequently aberrantly activated signaling pathways in human cancer cells. The pathway is involved in both tumor development and progression. In their new research, Alex Toker, HMS professor of pathology at Beth Israel Deaconess and Evan Lien, a graduate student in Toker’s lab, and colleagues found that in breast cancer cells, abnormal signaling through the PI3K/AKT pathway drives the production of glutathione, a major cellular antioxidant.

Although not specifically explored in this study, Toker said that the PI3K/AKT pathway is frequently aberrantly activated in HER2-positive cancers. This type of breast cancer is one of the more aggressive and treatment-resistant types.

This adaptation can allow cancer cells to survive even in the face of toxic chemotherapy. Therefore, the investigators decided to test the effectiveness of standard chemotherapy in combination with a drug that blocks glutathione production. This combination caused significant regression of breast cancer with PI3K/AKT pathway mutations, both in laboratory dishes and in mice.

“Our work has uncovered a vulnerability in human breast cancer that is used by tumor cells to escape the lethal effects of conventional chemotherapy and that leads to resistance to such therapies,” explained Toker, chief of the Division of Signal Transduction at Beth Israel Deaconess. “By targeting this vulnerability with specific drug combinations, the hope is that efficient therapeutic responses will be observed and with reduced toxicity.”

Pier Paolo Pandolfi, the HMS George C. Reisman Professor of Medicine and director of the Cancer Center at Beth Israel Deaconess added, “These findings are important as they further highlight how targeting the specific metabolic requirements of cancer cells can prove effective in their selective eradication.”

Toker noted that several questions remain, including whether a specific inhibitor of glutathione production can be developed that is safe to use in human patients. Further research is also needed to determine if enhanced glutathione production is also observed in tumors that harbor mutations other than those in the PI3K/AKT pathway. Moreover, because glutathione is only one of several antioxidants within cells, the researchers wonder whether there are other antioxidant pathways in tumor cells that are hijacked by the PI3K/AKT pathway to drive cancer.