Herpes viruses are stubborn foes. Infections from this family of viruses last a lifetime, causing suffering and even death when dormant viruses come to life. Herpes virus infections also increase the risk of spreading or acquiring HIV. 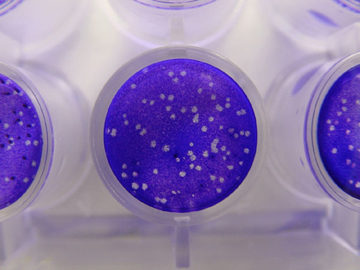 Creating a successful vaccine against two members of the family, the sexually transmitted herpes simplex virus 1 (HSV-1) and 2 (HSV-2), has proven to be challenging. A clinical trial being conducted by a branch of the National Institutes of Health, now enrolling patients, is based on an HSV-2 vaccine developed by David Knipe, Higgins Professor of Microbiology and Molecular Genetics at Harvard Medical School.

Meanwhile, Knipe and his colleagues are continuing to fight these viruses on another front. Seizing an approach used against HIV, they are studying possible treatments that could also combat herpes virus infections.

Two years ago a team led by Knipe reported similarities between herpes viruses and HIV. They reported similarity between an HSV protein and the HIV integrase, which weaves a strand of viral DNA into a cell’s chromosome, where it can then make copies of itself.

The HIV integrase enzyme contains a particular type of protein fold that the scientists also discovered in HSV-1. Drugs called HIV integrase inhibitors prevent HIV infection by binding to this site, keeping HIV’s genetic material out of the cellular chromosome. This blocks viral replication and later gene expression by the virus.

Now Knipe and his colleagues have shown that compounds that block this crucial step in HIV infection also prevent genital herpes and other herpes virus infections from taking hold. Their results, published in July in the journal mBio, raise hopes for a new class of anti-herpes drugs that could potentially fend off both HIV and the herpes viruses.

“This is a proof of principle that this class of compounds can work against additional virus classes,” Knipe said.

The scientists tested the HIV integrase-inhibiting drug against herpes viruses, using it against HSV-1 and HSV-2 as well as the related cytomegalovirus and Kaposi’s sarcoma herpes virus. It worked, but they needed large amounts of the drug to prevent viral replication. They screened similar compounds from an NIH library of HIV integrase inhibitors, coming up with some candidates that took much less drug to work better in herpes viruses.

The compound acts in two ways. First it stops the virus from copying itself, and later it keeps it from producing the proteins needed to assemble new virus particles.

An existing drug, acyclovir, effectively calms HSV-1 and HSV-2 outbreaks, but there are fewer choices for treating the reactivation of dormant cytomegaloviruses and Kaposi’s sarcoma herpes viruses in people whose immune systems are compromised.

The scientists don’t yet know exactly what the compound targets, Knipe said. More research is needed before this basic discovery is translated into a drug candidate.

“We’re going back to screen the compound library to see if other things are better,” he said. “In addition to possible clinical use, we can use these compounds as probes to understand how they are inhibiting viral synthesis.”