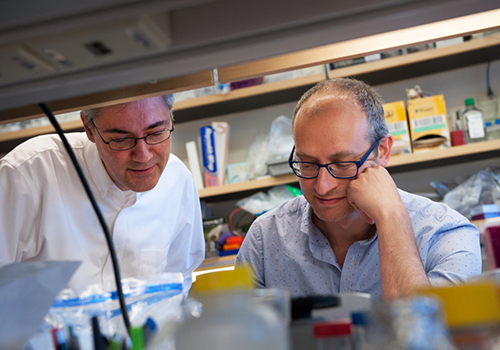 We are oscillating beings.

A new study in Cell shows how these oscillations reach all the way down into our cells and help mastermind the timing of protein production.

It’s a whole new layer of biology that could shed light on our understanding of conditions such as cancer, autism and metabolic disorders, which may involve disrupted protein production.

And it grew out of research on tuberous sclerosis complex (TSC), a rare genetic disorder that often causes autism.

Jonathan Lipton, HMS instructor of neurology and a sleep specialist at Boston Children’s Hospital, was intrigued that children with TSC and other neurodevelopmental disorders—including 50 to 90 percent of children with autism—have significant sleep disturbances.

“These kids are waking up in the middle of the night for hours at a time,” said Lipton. “This completely disrupts families’ lives and has motivated my work in the lab. Why is sleep disruption such a major part of these disorders?”

Lipton and Mustafa Sahin, HMS associate professor of neurology who does research on TSC at Boston Children’s FM Kirby Neurobiology Center, speculated that something is wrong with these children’s circadian rhythms. TSC’s underlying biology is fairly well understood, providing an opportunity to delve into this question.

Lipton and Sahin began by looking at the mTOR pathway, a fundamental cellular growth pathway that is overactivated in TSC. It regulates gene transcription, the first step in making proteins. Sahin has shown that in TSC, overactivation of mTOR causes neurons to develop abnormally and form improper connections.

“It’s been known for about 15 years that without BMAL1, you can’t have circadian rhythms,” said Lipton.

Like two gears in a clock, the mTOR pathway cyclically activates BMAL1, which then helps activate the cellular protein-making machinery in the ribosomes, the researchers found. As a result, they observed peaks and troughs of when proteins are made during a 24-hour day.

They further showed through their experiments that protein synthesis is turned on even when genes aren’t being transcribed.

“A whole part of circadian oscillation is at the level of the protein synthesis machinery, and occurs independently of DNA transcription,” said Sahin. “It’s another leg of the stool.”

Why is this important? Protein synthesis is fundamental to pretty much everything our cells do hour to hour. The circadian system helps make sure the right proteins are made at the right time—for example, anticipating the liver enzymes you will need in the morning to digest your breakfast.

“The single most important thing to test is how this will play out in disease,” said Lipton, “particularly in disease in which protein synthesis is implicated.”

If the timing of protein synthesis is thrown off, it could lead to shortages of certain enzymes when they’re most needed, or cause accumulations of proteins that aren’t needed.

Here are some disease scenarios Lipton is speculating about:

Neurodevelopmental disorders: Proteins are critical in signaling at synapses, the junctions between neurons. Too much or too little of a protein at a given time could disrupt brain function and contribute to conditions like autism. (Since sleep disruption is common in these disorders, a big question in the field is whether sleep disruption is a byproduct or a cause, said Lipton.)

Metabolic disease: The making of enzymes at specific times is key to our ability to break down food and other compounds. “Problems with protein oscillations may disrupt cells’ ability to dispose of metabolic byproducts,” said Lipton. “It can affect their ability to handle physiological toxicity—like missing a trash pickup.”

Neurodegenerative diseases: The researchers speculate that disorders such as Parkinson’s could result from a mismatch between the timing of protein synthesis and synthesis of enzymes to break the proteins down.

Cancer: Cancer cells are already known to have dysregulated protein synthesis. Perhaps altered circadian regulation adds to a cancer’s virulence by removing an important brake in the system.

Additionally, knowing when certain enzymes are made could inform the timing of drug therapy. Chronotherapeutics, a concept that began in the cancer world as an attempt to reduce the side effects of chemotherapy, takes advantage of these natural oscillations. Boston Children’s is starting to incorporate it into epilepsy treatment.

Circadian rhythms are coming to be seen as a fundamental part of our biology, and circadian or sleep disturbances have been linked to obesity, diabetes, cardiovascular disease and even inflammation. Knowing how the circadian clock interacts with protein synthesis could provide a whole new angle on medicine.

Adapted from a post on Vector, Boston Children’s clinical and research innovation blog.