Which microglia in the brain are "good" and which are "bad"? 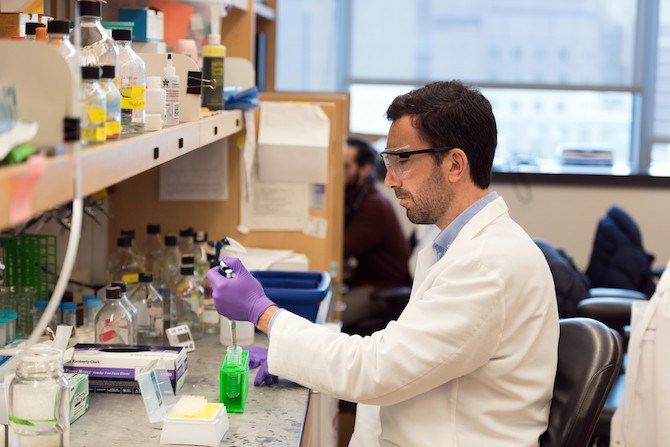 “If we see microglia in brain disease, are they part of the problem or part of the solution?” asks Timothy Hammond. Image: Michael Goderre

Immune cells known as microglia have been found to protect the brain from injury and infection and are critical during brain development, helping circuits wire properly. They also seem to play a role in disease—showing up, for example, around brain plaques in people with Alzheimer’s.

In an ambitious study, perhaps the most comprehensive survey of microglia ever conducted, a team led by Harvard Medical School and Boston Children’s Hospital researchers has shown that microglia aren’t monolithic; they come in different flavors, and unlike the brain’s neurons, they’re always changing.

The findings, published Nov. 21 in Immunity, open a new chapter in brain exploration.

“Up until now, we didn’t have a good way of classifying microglia,” said Timothy Hammond, a research fellow in neurology in the lab of Beth Stevens at HMS and Boston Children’s and first author of the study. “We could only say how branched they look, how dense they look under a microscope. We wanted to get an idea of what microglia were doing and ‘thinking.’”

Eavesdropping on microglia over time

Hammond’s team collaborated with the lab of Steven McCarroll, the Dorothy and Milton Flier Professor of Biomedical Science and Genetics in the Blavatnik Institute at HMS. Starting with mice, the researchers sequenced RNA from more than 76,000 individual microglia to see which genes were turned on or off, using a technique known as Drop-seq that was developed in McCarroll’s lab.

The cells were sampled from all over the brain and throughout the animals’ lifespan (starting before birth), as well after acute brain injury.

The genetic signatures allowed Hammond to classify the microglia into at least nine distinct groups, including some types never detected in the past. Some types appeared almost exclusively in the embryonic or newborn stages, others only after injury.

“The signatures also tell us something about what these cells are doing,” he said. “If we see microglia in disease, for example, we can begin to parse out: Are they contributing to the disease or are they trying to repair the brain? We think this will help uncover new and interesting roles for microglia.”

Hammond then went a step further: He overlaid the classifications on a map of the brain to see how the different varieties of microglia were distributed spatially.

This yielded some interesting patterns. For example, one group of microglia (group 4 in the schematic above) tended to cluster near the brain’s developing white matter. This suggests they could be involved in myelination, in which nerve fibers are given a layer of insulation to help them carry signals over longer distances, Hammond said.

“We don’t see those microglia at any other time point or area of the brain,” he said. “We think they could be important to how the white matter develops and how axons connect to different parts of the brain.”

In sickness and in health

Another tiny but important microglial population (group 8 in the schematic) came to light in the disease setting. The team found it first in a mouse model mimicking multiple sclerosis, which involves a loss of myelination, and later in brain tissue from actual patients with the disease.

“These microglia are very inflammatory compared with normal microglia,” Hammond said. “It could be a pathological subset that we normally wouldn’t see, but because we sequenced so many microglia we were able to detect this small population.”

Overall, microglia were most diverse early in brain development, in the aged brain and in disease. The researchers think these distinct groups may shed light on what the cells are doing and what local cues they’re responding to.

All this information should help scientists sort out the “good” from the “bad” when it comes to microglia, particularly in so-called activated microglia that appear after brain injury and in diseases like autism and Alzheimer’s. This could help direct the development of drugs to promote the beneficial microglia subsets and block the detrimental ones.

“Tim’s work has broad implications for the development of new microglia biomarkers and tools that can be used to track, identify and manipulate specific subpopulations, in both health and disease,” said Stevens, HMS associate professor of neurology at Boston Children’s and co-corresponding author on the paper with McCarroll.

Stevens is also a Howard Hughes Medical Institute investigator. The study was supported by the Simons Foundation Autism Research Initiative (grant no. 346197), International Rett Syndrome Foundation (no. 3214), the Silvio O. Conte Center (NIH no. P50MH112491), the Stanley Center for Psychiatric Research at the Broad Institute of MIT and Harvard, a Helen Hay Whitney Foundation fellowship and the Lundbeck Foundation.

Adapted from a post on Vector, the Boston Children's research and clinical innovation blog.