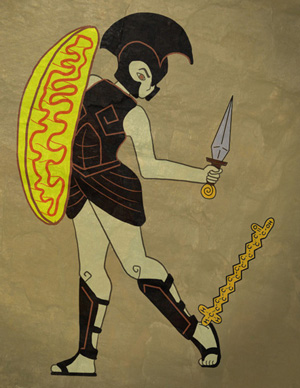 Research by scientists at HMS suggests some cancers’ taste for fat may be prove to be their Achilles’ heel Image: Holly Hebert

Cancers are such notorious sugar addicts that PET scans searching for the disease light up when they detect sugar-gobbling tumor cells.

But a handful of cancers appear to favor fat over sugar, a propensity that has long mystified scientists. Now, a study from Harvard Medical School reveals how certain tumors develop a taste for fat as their life-sustaining fuel.

The findings, published Sept. 15 in Molecular Cell, show how a signaling pathway that normally keeps fat-burning in check goes awry in some cancers, revving up fat consumption and fueling tumor growth.

Specifically, the study found that a protein called prolyl hydroxylase 3 (PHD3) appears to be a key regulator of the delicate balance inside cells that dampens fat- burning. That protein, the research shows, is abnormally low in certain forms of cancer, including acute myeloid leukemia and prostate cancer—a finding that can help lay the ground for development of therapies that work by starving tumors of their fuel.

“This really represents a new frontier in looking at the metabolism of cancer,” said Marcia Haigis, HMS associate professor of cell biology and senior author of the paper. “Understanding the molecular handle of this pathway is the first step toward translating the basic work into therapy.”

Biologists have known for some time that when cells run low on nutrients, they switch from sugar to fat as their fuel source to sustain function.

When cells have low energy, the protein AMPK targets an enzyme, ACC, to activate fat oxidation, which helps cells burn fats to make energy. But when cells have enough resources, they seek to maintain energy balance. Even in the face of stress, cells fight to keep this state known as homeostasis. The scientists were searching for precisely how cells turn off fat oxidation.

Looking for possible players involved in this delicate balance, the team homed in on the protein PHD3. A handful of recent studies had suggested that PHD3 plays a part in cell metabolism but until now its precise role has remained unclear.

In a series of experiments, the HMS team showed that PHD3 suppressed fat-burning by chemically modifying and activating ACC2—a version of the same enzyme responsible for keeping cellular fat-burning in check.

To determine PHD3’s role in cancer, the team combed through scores of databases of all human cancers. Sugar-craving tumors would have high levels of this fat-burning blocker, to keep sweet-powered energy flowing, the researchers surmised. On the other hand, tumors that relied on fat for their energy would show low levels of PHD3.

To test their hypothesis that these particular cancers needed fats to survive and that PHD3 was a key regulator in the fat-burning process fueling tumor growth, the researchers restored to normal the levels of PHD3 in a line of cancer cells and in mice. The tumors not only stopped growing, they died.

“That was really exciting,” Haigis said. “We’ve altered a lot of metabolic pathways in cancer, and this is one of the few pathways we’ve modulated where we really see the tumors die. They are so dependent on fat oxidation that they die.”

Before this discovery can move ahead to the clinic, Haigis said, more basic research needs to be done, both in animal models and in cancer cells taken from patients, to understand why certain tumors depend on fat.

“What do fats provide to tumors that other fuels don’t? That’s one open question, and this is only the first chapter in the story.”

The work was supported by the National Institutes of Health grant DK103295 from the National Institute of Diabetes and Digestive and Kidney Diseases, by the Ludwig Center at Harvard Medical School, the Glenn Foundation for Medical Research, an American Cancer Society New Scholar Award and the Alexander and Margaret Stewart Trust.