T Minus, T Plus 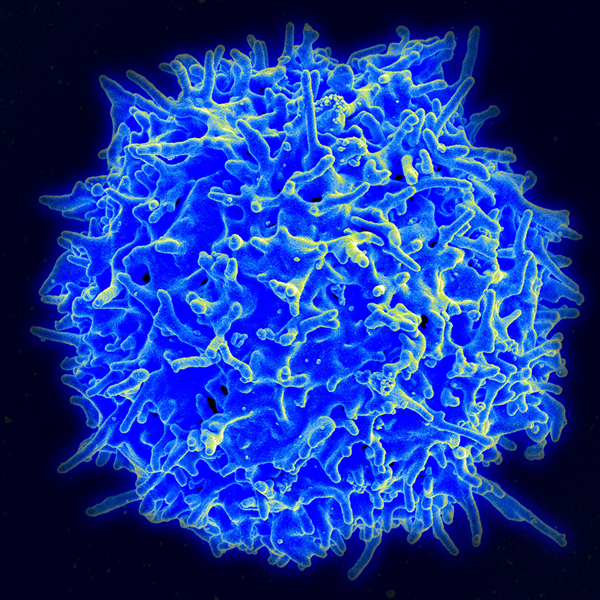 In people with chronic infections or cancer, disease-fighting T cells tend to behave like an overworked militia—wheezing, ill-prepared, tentative—in a state of “exhaustion” that allows disease to persist.

In a paper published online in Science, researchers at Harvard Medical School and the Dana-Farber/Boston Children’s Cancer and Blood Disorders Center report that, in mice with chronic viral infection, exhausted T cells are controlled by a set of molecular circuits fundamentally different from the circuits of effective T cells that battle infections or cancer—a finding that suggests a way to increase the staying power of chimeric antigen receptor T cells, or CAR T cells, a promising form of immunotherapy for cancer.

An accompanying study led by researchers at the University of Pennsylvania and co-authored by HMS scientists reports that these differences in circuitry remain largely unchanged by a type of cancer immunotherapy known as checkpoint inhibition, potentially closing off one avenue of improving this technique.

The pair of studies bring renewed focus to the epigenetics of T cells—the multilayered system of molecular switches, accelerators and throttles that controls the activity of genes. Scientists have known for years that the pattern of genes is different in exhausted T cells from the pattern in functional T cells that are fully engaged in fighting disease, but the actual extent of these differences has been uncertain.

One difference that is clear is that exhausted T cells express the programmed cell death protein-1 (PD-1), which commands them not to attack normal, healthy cells but can also prevent them from striking at cancerous or chronically infected cells. Blocking PD-1 with checkpoint-inhibiting drugs—and thereby restoring the cancer-killing zeal of T cells—has become one of the most successful new approaches to cancer treatment in nearly a decade. However, it has shown effectiveness in only about a quarter of cases.

“Exhausted T cells display a variety of functional defects,” said W. Nicholas Haining, HMS assistant professor of pediatrics at Dana-Farber/Boston Children’s and senior author of the new paper. “They are paralyzed and don’t have the firepower to destroy cancer or virally infected cells. For us, the question in this study was, do exhausted cells represent a distinct type of T cell or are they merely a ‘groggy’ version of functional T cells?”

With chronically infected mice as their model, the researchers used a new technology called ATAC-seq (assay for transposase-accessible chromatin with high-throughput sequencing) to map the regulatory regions of the genome—the sections of DNA involved in switching genes on and off—in the animals’ exhausted and functional CD8+ T cells.  (CD8+ T cells are programmed to identify and eliminate cancerous and infected cells.)

“We found the landscape of regulatory regions to be fundamentally different in exhausted and functional T cells,” Haining said. “There were thousands of instances where a regulatory region appeared in exhausted T cells but not in their functional counterparts, and vice versa. This tells us that the two types of cells use very different wiring diagrams to control their gene activity.”

The researchers then tested whether removing a regulatory stretch of DNA that spurs the production of PD-1 would drive down expression of the protein. Using CRISPR/Cas9 technology, they snipped out that region and indeed, PD-1 expression dropped.

The success of this experiment may offer the key to improving CAR T cell therapy. CAR T cells are T cells that are removed from a patient, genetically engineered to grow a protein “sensor” that targets them to tumor cells and then re-injected into the patient. The hope is that these retrofitted T cells will be better able to track down cancer cells, particularly in leukemia. Although the retrofitted T cells have demonstrated effectiveness at tracking down cancer cells, particularly in leukemia, one of the shortcomings of CAR T cells is that they tend to become exhausted.

However, one of the shortcomings of CAR T cells is that they tend to become exhausted. The work described in the new study suggests that while T cells are being engineered to produce the sensor, they could also be retooled to delete the genetic wiring that causes them to express excessive levels of PD-1 or other exhaustion genes. The resulting CAR T cells would not only be better at stalking cancer but also more aggressive about attacking it.

In the companion paper, researchers explored whether blocking the PD-1 checkpoint rewired exhausted T cells to make them, from an epigenetic standpoint, more like functional T cells. Using chronically infected mouse models, as in the first study, the investigators found that while such gain of function does occur briefly, the epigenetic switches from its previous, exhausted state remain largely unchanged.

“This suggests that the benefits achieved by checkpoint blockade result from a transient revving up of exhausted T cells, not a permanent reshaping of their state,” Haining said.

The findings of the two studies point to the need for a comprehensive atlas of the regulatory regions that are active in exhausted and functional T cells, he continued. Such a guide would provide targets for rewiring T cells with genetic engineering or epigenetic drugs to make them more effective cancer killers.