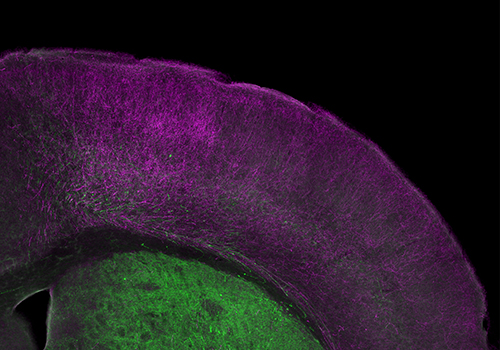 Microscopic view of the frontal cortex of a mouse showing the two types of neurons (ChAT+, purple; ChAT-, green) that stem directly from the basal ganglia. Image: Arpiar Saunders and Chip Gerfen

It’s been “known” for decades: Sensory, motor and cognitive signals come in from the brain’s cortex and are processed in the basal ganglia. The basal ganglia then send out signals that get routed through the thalamus and back to the cortex.

Except not always, according to a new study in animal models. The basal ganglia can also talk back directly to the cortex, no thalamus required.

The findings, published this week in Nature, upend classic anatomy and provide possible new insights into psychiatric diseases such as schizophrenia.

“We’ve discovered a pathway in the brain that nobody knew existed,” said Bernardo Sabatini, the Alice and Rodman W. Moorhead III Professor of Neurobiology at Harvard Medical School and senior author of the study.

“Our results redefine the architecture of the basal ganglia and the mechanisms for subcortical-cortical feedback, which are absolutely crucial for coordinated motor behavior and reward learning,” said the study’s first author, Arpiar Saunders, who conducted the work as a graduate student in the Sabatini lab. Saunders is now a postdoctoral researcher in Steven McCarroll’s lab in the HMS Department of Genetics.

The unexpected shortcut from the basal ganglia to the frontal regions of the cortex also may explain a longstanding mystery about how antipsychotic drugs work, the authors said.

A light in the basement 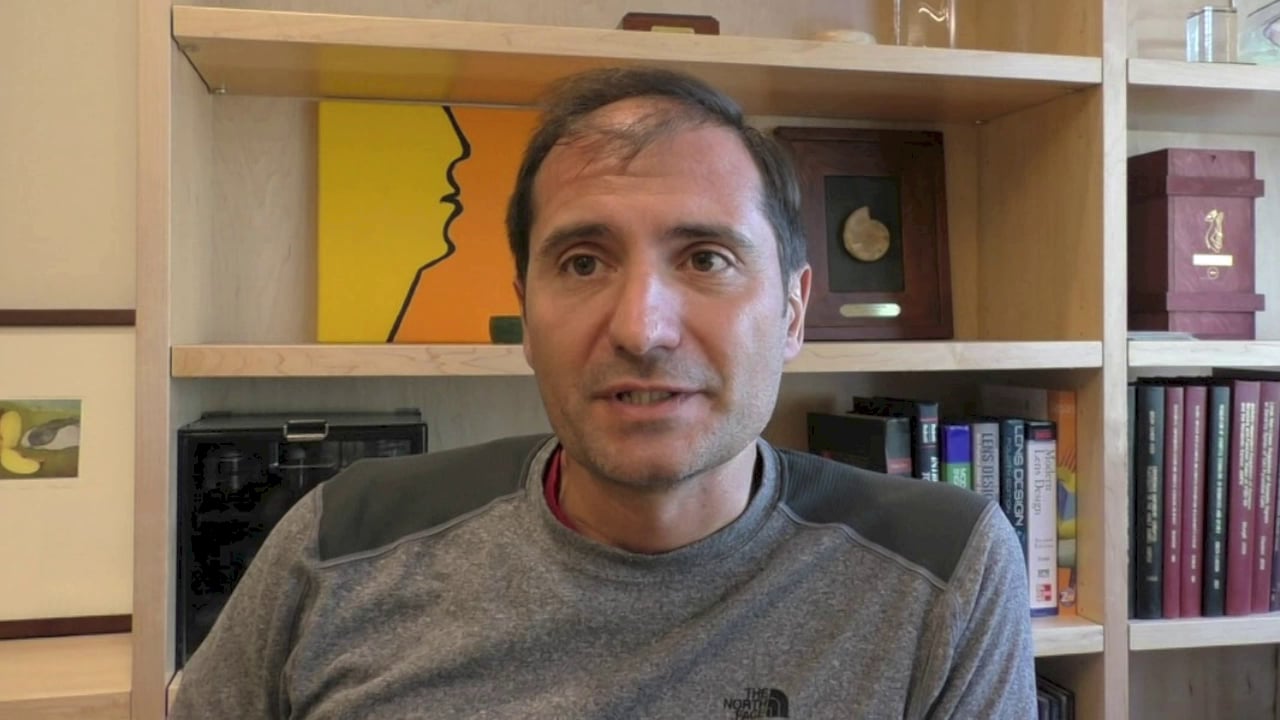 Watch Bernardo Sabatini and Arpiar Saunders discuss their discovery of a new pathway in the brain. Video: Stephanie Dutchen

Researchers believe the basal ganglia help organisms decide how to move and behave at a given moment, including control of voluntary movement, procedural and reward learning, and habit forming and breaking.

Many disorders of motion or behavior have their roots in this area of the brain, ranging from obsessive-compulsive disorder to Parkinson’s disease.

“The role these subcortical regions play in many neurological and psychiatric diseases is continuing to be appreciated,” said Saunders. “It’s really important to better understand how they’re organized.”

Unfortunately, the subcortical regions are incredibly complex and hard to study.

“If you think of the brain as being like a house, these regions are the really dirty basement, where stuff is all over the place and not organized in boxes, and we have only this little tiny flashlight,” he said.

As new research tools have been developed in recent years, neuroscientists have tended to apply them first to the brain areas they understand best, said Saunders. He wanted to apply them to “these deeper basement brain structures that have been understudied for a long time.”

While he was poking around with viruses and microscopes built in the Sabatini lab, Saunders spotted neurons projecting from the core of the basal ganglia, called the globus pallidus, right into the frontal cortex. He was taken aback.

After confirming that these shortcut neurons were indeed part of the basal ganglia, Saunders and Sabatini realized the accepted model needed an update.

So what were these new shortcut neurons?

The deeper he looked, the more sense it made. Scientific literature was sprinkled with odd results from studies of the striatum as well as other hints that the accepted model didn’t explain everything about how the basal ganglia work.

“We’re excited about this unexpected output pathway because it may explain some of the weirdness people have seen in the striatum,” said Saunders.

The shortcut neurons turned out to come in two flavors, ChAT+ and ChAT-, depending on their expression of the protein responsible for making the neurotransmitter acetylcholine.

Using a technology called optogenetics that allows researchers to stimulate specific cells using light, viruses that turn off desired genes, high-resolution imaging and other techniques, Saunders was able to study both neuron types separately and together in the brains of lab mice. He documented some of their physical, chemical and electrophysiological properties and revised the basal ganglia’s wiring diagram.

A fellow graduate student in the Sabatini lab, Ian Oldenburg, now a postdoctoral fellow at the University of California, Berkeley, studied how the shortcut neurons control the cortex in awake mice.

Saunders was further surprised to find that the ChAT+ neurons make two neurotransmitters with opposite functions. One transmitter, GABA, tends to inhibit cells, while the other, acetylcholine, tends to excite them. This presented a brainteaser the team is still working through.

The team found the same shortcut neurons in a macaque, which raises the likelihood it’s shared by humans.

Next, Sabatini wants to understand who’s talking to whom in these brain areas, including which cells in the cortex are listening to the shortcut inputs from the globus pallidus, as well as how the ChAT+/- neurons work together with the previously known ones. This will help the team understand more fully how these neurons function and the precise roles they play.

“I think this pathway will be important for an animal surveying its environment and deciding what to do next and when to do it,” said Sabatini. “We still have years’ worth of work to do to nail that down.”

Sabatini’s father, a renowned cell biologist, once asked him how neuroleptics work. Also called antipsychotics or major tranquilizers, neuroleptics are given to people with schizophrenia and bipolar disorder to relieve hallucinations and other psychotic symptoms.

“The more I thought about it, the more I realized it’s a good question,” said Sabatini. “We really don’t know.”

Many researchers suspect schizophrenia is caused by too much dopamine activity in the brain. Antipsychotics compensate by modifying type-2 dopamine receptors. Most of that dopamine—up to 85 percent—is concentrated in the basal ganglia.

What connects dopamine-2 receptors in the basal ganglia to the changes in the prefrontal cortex? Researchers have proposed various theories.

“It seems natural to speculate that this pathway might have something to do with how antipsychotics work,” said Sabatini. “I think this has to provide part of the answer to my dad’s question.”

His team hasn’t shown yet whether that’s true.

They’ve demonstrated that the direct basal ganglia-to-cortex pathway is sensitive to antipsychotics. Others have shown that the cells in the cortex to which the shortcut neurons connect go awry in schizophrenia and that people with schizophrenia exhibit changes in the neurotransmitters released by shortcut neurons.

But links aren’t the same as causes. The team is still trying to test whether antipsychotics actually rely on that pathway to work.

“That’s something we want to do, and that we hope others will pick up,” said Sabatini.

Part of the problem is schizophrenia is tough to model in animals, including mice, he explained. Mouse brains are a lot like human brains, but less so in the prefrontal cortex.

If the pathway does turn out to play a role in schizophrenia or other diseases, it would give researchers a new target for developing better treatments. Current antipsychotics, for example, can cause Parkinson’s-like symptoms when taken for a long time.

“The globus pallidus is a real crossroads for sensory, motor and limbic signals,” said Saunders. “The antipsychotics that change activity in this region could be working in a somewhat generic way. A better understanding of the parts could allow us to develop safer drugs that target specific elements.” 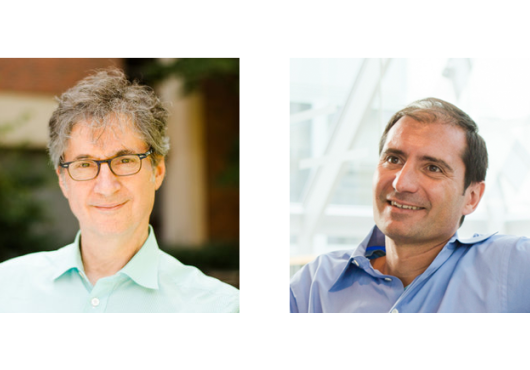