Gene discovery reveals mechanism behind how we think

Skyler Jackman and colleagues studied the phenomenon known as synaptic facilitation by using light to turn neuronal connections on and off. The optogenetic protein used in this technique appears yellow. Image: Regehr lab

Skyler Jackman and colleagues studied the phenomenon known as synaptic facilitation by using light to turn neuronal connections on and off. The optogenetic protein used in this technique appears yellow. Image: Regehr lab

Our brains are marvels of connectivity, packed with cells that continually communicate with one another. This communication occurs across synapses, the transit points where chemicals called neurotransmitters leap from one neuron to another, allowing us to think, to learn and to remember.

Researchers have known that these synapses often need a boost to send information across neuronal divides. But where that boost comes from has been a mystery.

Now Harvard Medical School researchers have discovered a gene that provides that boost by increasing neurotransmitter release in a phenomenon known as synaptic facilitation. And they did so by turning on a light or two. 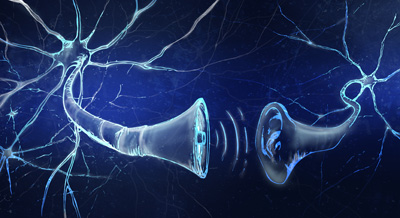 The gene is synaptotagmin 7 (syt7 for short), a calcium sensor that dynamically increases neurotransmitter release; each release serves to strengthen communication between neurons for about a second. These swift releases are thought to be critical for the brain’s ability to perform computations involved in short-term memory, spatial navigation and sensory perception.

A team of researchers who made this discovery was led by Skyler Jackman, a postdoctoral researcher in the lab of Wade Regehr, professor of neurobiology at HMS. They recently reported their findings in Nature.

“We really think one of the most important things the brain can do is change the strength of connections between neurons,” Jackman said. “Now that we have a tool to selectively turn off facilitation, we can test some long-held beliefs about its importance for thinking and working memory.”

Although synaptic facilitation was first described 70 years ago by Te-Pei Feng, known as the father of Chinese physiology, Jackman and colleagues were able to identify the mechanism behind synaptic strengthening by taking advantage of advanced laboratory techniques unavailable to previous generations of scientists.

A dozen years ago, Regehr suspected that syt7 might drive this synaptic strengthening process: The gene turns on slowly and then ramps up in speed, which would fit gradual release of neurotransmitters.

About eight years ago scientists in another lab engineered “knockout” mice that lack the syt7 gene, setting the stage for experiments to test Regehr’s speculations. But when grown in a lab dish, neurons from these knockout mice behaved no differently than other neurons; results that, at the time, dashed hopes that syt7 could explain the synaptic boost.

A year ago Jackman took another tack. He tested synaptic connections in brain tissue taken from the knockout mice but still having intact brain circuits, an experiment more reflective of how neurons and synapses might work in a living animal.

“It was striking. It was amazing,” Jackman said. “As soon as we probed these connections we saw there was a huge deficit, a complete lack of synaptic facilitation in the knockout mice, completely different from their wild-type brothers and sisters.”

To be certain that knocking out syt7 was responsible for this change, Jackman had to find a way to reinsert syt 7 and restore its function. He did that by using optogenetics, a genetic manipulation tool that allows neuronal connections to be turned on and off with light. He augmented this technique with bicistronic expression, a method that packages one optogenetic protein and one syt7 protein into a single virus that infects all neurons equally. Using these two techniques, Jackman could selectively study what happened when syt7 was reinserted into a neuron and measure its effects reliably.

Jackman is eager to use these techniques to study subsets of neurons in different parts of the brain to see whether the gene affects fear in the amygdala, for example, or spatial navigation in the hippocampus.

“We have theories about how the brain works, but without having a way to change the brain, we don’t really know how to test those theories,” Jackman said. “This gives us a new tool for changing the function of the brain and seeing how that affects the behavior of an animal.”