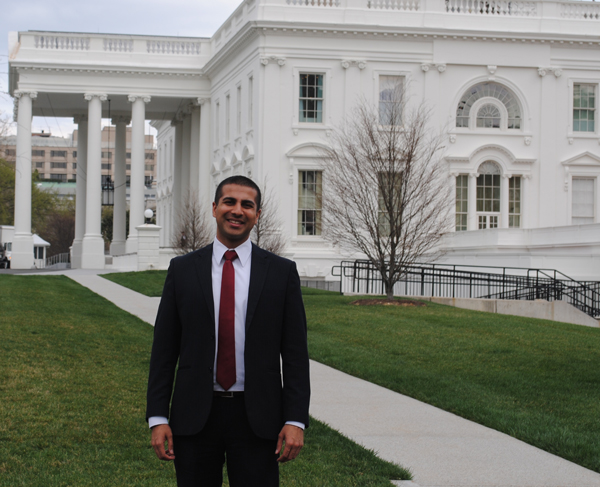 To Aakash Shah, mentorship has always been a defining aspect in any chapter of his education, beginning with his own parents.

Having immigrated to the United States from India in the mid-1980’s, his parents faced struggles and sacrifices as they worked to provide a life of opportunity for their children.

Shah's father found employment sweeping and cleaning a convenience store near a New York City Subway stop, and his mother helped earn money stocking shelves at the corner store near where Shah grew up in Cliffside Park, New Jersey.

Shah, now 28, can remember a point in which the trials and tribulations of immigration wore away at his parents. He remembers overhearing conversations about a possible return to India.

But it was when Shah returned home from kindergarten one day, report card in hand, that everything changed.  As his father ran his eyes through the columns of grades, the contours of his face softened. He turned to Shah’s mother and said, “We’re going to stay. His future is going to be better here.”

His parents’ selflessness and determination have been sources of inspiration for the Peabody student, providing a backbone for his own strong work ethic.

Once he enrolled in Bergen County Academies, a math and science magnet school in New Jersey, he said, other mentors emerged. Shah credits his early interest in science, research and medicine to a teacher there, Donna Leonardi.

With Leonardi’s guidance, a leading expert in low dose toxicology—Edward Calabrese—recognized research Shah conducted when Shah was in the tenth grade.

“I was blown away by the fact [Calabrese] was taking the time to call a high school student who had done a science fair project that merited his time and attention” said Shah.

Shah was drawn to science research early, but he was also always aware of a burgeoning social consciousness—although when he was young, he was unsure of how to channel it productively.

Growing up in a household that lived paycheck to paycheck, Shah said it was the support of the American government and various civic programs that helped his family succeed.

Medicaid provided health care, and the Women Infants and Children Nutrition Program ensured healthy development. It was a federal grants and loans that helped Shah attain an outstanding higher education at Ursinus College in Pennsylvania.

While Shah appreciated the critical lift such programs provided, it was not until he connected with another mentor, the Ursinus campus chaplain Charles Rice, that his eyes were opened as to how he could try to address social inequities in this world.

“Discoveries at the lab bench are just the first step in the process of helping patients. There are many points thereafter that one can help others as well ” said Shah.

Following undergraduate studies, Shah decided medical school was the next step in combining his love for science and his desire to help others.  Many of the social issues that he feels most passionately about often seem to manifest themselves through health and disease, he said, prompting his decision to pursue a career as a physician.

He eventually chose to attend HMS because, as he said, “it is home to an incredible breadth and depth of mentors.”

It was during Shah’s first year at HMS, in 2010, that he discovered he was one of 32 Americans to be selected as a Rhodes Scholar. He firmly believes this accomplishment speaks to the guidance, support and opportunities he has since received over the years.

Shah took a leave of absence from HMS to study at Oxford University for two years where he received two degrees, a masters in comparative social policy and a masters in business administration. The experience solidified his decision to transition from basic science research to working on health policy issues.

Returning to HMS in 2013 he was fortunate to discover more mentors, such as John Ayanian, now the director of the Institute for Healthcare Policy and Innovation at the University of Michigan, and Mark Schuster, the HMS William Berenberg Professor of Pediatrics at Boston Children’s Hospital, who shaped his thinking towards health policy and health policy research. Shah simultaneously discovered an interest in emergency room medicine.

It was because of his growing interest in healthcare reform, however, that Shah took on the role of health policy advisor for New Jersey Senator Loretta Weinberg in 2015, and she has since become another mentor.

“In working with her, I really came to understand where the cracks in our health care system are. Between that, and in working in the emergency room, and seeing patients who have fallen through those cracks, I really came to understand who those folks are, what are the barriers that they face, and what can we do to help them overcome some of these barriers,” he said.

A greater understanding of social policy led to one of Shah’s most recent endeavors. In 2015 Shah founded and became executive director of Be Jersey Strong, a nonprofit that trains and mobilizes student community health workers in New Jersey, providing outreach and enrollment assistance to the medically uninsured.

“The body, in many ways, serves as a language through which inequality speaks.” —Aakash Shah

Before launching Be Jersey Strong, Shah said there were only about 30-40 people who could provide enrollment assistance in the state.

The nonprofit has now recruited 500 student volunteers from 20 campuses around the Garden State, with two-thirds able to speak foreign languages. Because the volunteers are multilingual, he said, they are able to serve a host of communities that otherwise simply might be overlooked.

Shah credits much of the success of Be Jersey Strong to yet another mentor, William Owen, former president of the University of Medicine and Dentistry of New Jersy, who he connected with when he worked for Weinberg.

Shah recognizes that Owen has played an invaluable role in the organization’s creation and that if it not been a team effort, it would not have grown to be what it is today.

Others have recognized the success of the organization, including the Obama Administration. At the end of March, Shah was recognized at the White House as a Champion of Change for the Affordable Care Act.

As far as plans for the future, Shah will begin clinical training at University Hospital, affiliated with Rutgers Robert Wood Johnson Medical School, where he will be working in the emergency room for the next three years.

His first and foremost goal is to be a good doctor.

“The body, in many ways, serves as a language through which inequality speaks,” he said. “I can do my part in helping combat that through working as a physician.”

His ultimate vision for Be Jersey Strong is to “build towards becoming the premier clearinghouse for addressing health-related social needs in communities throughout New Jersey.” He hopes to expand the program to add screening for housing and heating assistance.

Shah ultimately envisions himself splitting his time between being a practicing clinician at a major academic medical center and continuing to grow Be Jersey Strong.

But above all, he hopes to continue to inspire and encourage others. As he said, “I’ve had so many mentors who so wonderfully shaped my trajectory and helped me realize my potential, I feel it is only right to do my part and pay it forward.”