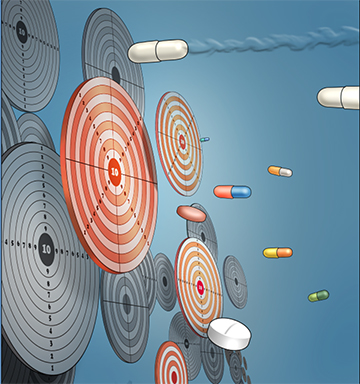 If life were simple, a disease could be treated with one drug that hits one molecular target, like striking a piano key. Instead, researchers wrestle with the fact that most drugs hit multiple targets in the body at the same time, like playing a chord. Often, it’s not even clear which targets, struck intentionally or inadvertently, lead to which treatment outcomes or side effects.

Researchers have largely avoided studying this phenomenon, called polypharmacology, because it seemed so complex. Now, researchers at Harvard Medical School have used that very complexity to develop a computational method that relates drug targets to outcomes.

“We found a way to turn the tables on a conundrum in pharmacology,” said lead co-author Taran Gujral, a research fellow in systems biology at HMS. “Polypharmacology has been viewed as a problem, but we decided to embrace it.”

“We stepped back from trying to study individual drugs and their targets to instead look at many drugs acting upon many kinases as a system,” said lead co-author Leon Peshkin, lecturer on systems biology at HMS.

The work provides a way to predict the effects of untested cancer drugs; could guide the design, repurposing and combining of drugs for greater safety and effectiveness; and promises to illuminate hidden details in the molecular circuitry of disease.

The results were published March 19 in Proceedings of the National Academy of Sciences.

The team looked at a class of drugs called protein kinase inhibitors, or PKIs. As their name suggests, PKIs block the action of one or more of the 518 protein kinases in the human body. Kinases help regulate many cellular processes, and kinase disruption has been associated with cancer and other diseases.

PKIs have shown promise as a cancer treatment, but they are “notoriously nonspecific” in the kinase targets they strike, Gujral said.

In vitro lab tests may show that a PKI inhibits a particular kinase, but the experimental conditions may not replicate all the interactions that occur in a whole cell, let alone a human body, so secondary targets may remain hidden. Later, clinical trials may show that a PKI achieves the desired treatment result, and if the side effects are tolerable, the time and effort required to systematically determine how many other kinases the drug inhibits along the way may not seem worthwhile.

Instead of attempting the daunting task of testing the effect of every PKI on every kinase one by one, Kirschner’s team took a systems biology approach to the problem.

“We examined many PKIs and many kinases together to find out what they jointly uncover about these drug targets,” Kirschner said. “We exploited the nonspecificity.”

Gujral and Peshkin began by analyzing previously published data about which kinases were being inhibited by which PKIs. These data showed that although PKIs strike many targets, each one has its own unique pattern of targets—a signature musical chord of kinases.

The team devised a way to use the information as a Rosetta stone from which they could mathematically decipher which kinases influence cell migration, a hallmark of cancer invasion and metastasis. They identified two classes of kinases that are important for cell migration in certain types of tissue. Then they confirmed their findings in cell cultures.

“We were able to predict the biological response of 150 previously untested PKIs very well,” said Peshkin. “Now we can use our method to study thousands of PKIs.”

Understanding what specific PKIs do in the body opens many doors.

One of them is the hope of making multidrug therapy a more practical possibility by narrowing down the number of combinations and concentrations to test. The team’s results suggest that rather than “tuning” a single PKI to hit a single target—and only that target—precisely, it may be easier to take advantage of the drugs’ broad target spread to develop cocktails.

For example, if one PKI hits targets A, B, C and D, and a different PKI hits targets A, E, F and G, then treating a patient with half the dose of both PKIs means target A gets hit just as hard—with less severe side effects, because they’re dispersed across more targets.

“The FDA states that you can try combinations of drugs if you have a mechanistic rationale,” said Gujral. “Our method provides information to help researchers decide which combinations to try, establishing that rationale.”

“There are over 200 PKIs in clinical trials,” he added. “Our work suggests we may not need new ones; we may just need to know how to use the current ones most effectively.”

The team hopes researchers in academia and industry will start incorporating the new model into their drug discovery and development platforms.

The model also allows researchers to begin to identify kinases for which there currently are no drugs. And it provides an early prediction of how a PKI that hasn’t been tested in a whole organism will affect a cellular process.

Finally, the model offers a way to “look under the hood” of how kinases and their associated cellular pathways contribute to health and disease, said Peshkin.

“Being able to see which kinases are affected by a PKI helps us understand whether certain cellular pathways are involved in a disease we’re trying to treat,” said Kirschner.

“We may be able to investigate whether a pathway is involved not only generally in cell death or cell migration, but also specifically within the heart or the liver or the skin, or in you versus in me,” he added. “We can begin to ask questions like what is unique about triple-negative breast cancer.”

Funding for this research was provided by National Institutes of Health grants R01HD073104 and R01GM103785.