The beginnings of systems biology at Harvard Medical School, as former chair Marc Kirschner recalled, involved a request 15 years ago that made him a bit “queasy.”

In 2003, Joseph B. Martin, dean of HMS at the time, asked Kirschner to give a talk on the future of science in medicine at a retreat for the chairs of clinical and nonclinical departments at HMS and affiliated hospitals. Kirschner, the founding chair of the Department of Cell Biology in the HMS Blavatnik Institute, and today the HMS John Franklin Enders University Professor of Systems Biology, said he reluctantly accepted the task.

For inspiration, Kirschner said he looked back 100 years, to a time of great optimism that medicine would be transformed by basic science, particularly physiology—the study of the processes that living systems use to function. With concepts such as homeostasis and feedback inhibition, the field of physiology reflected a way of thinking about biology as complex systems, rather than reductionist approaches that focused on the individual parts of biological interactions.

This became a central theme of Kirschner’s talk that day, one in which he highlighted the promise that a quantitative understanding of biological systems held for the future of fundamental discovery, drug development and more.

“I believe that science, at its most creative, is more akin to a hunter-gatherer society than it is to a highly regimented industrial activity, more like a play group than a corporation... With regards to Systems Biology, I would say that I am most proud that we created a little more space to play here" -- Marc Kirschner, closing remarks, Nov. 6. Read the remarks in full here.

A few months later, Martin approached with another request: would Kirschner consider stepping down as the head of cell biology to helm a brand-new department at HMS, one focused on bringing vastly different fields together, combining mathematical, chemical and computational approaches and more, to study biological systems?

Kirschner agreed and soon assumed the role of founding chair of the Department of Systems Biology, one of the first departments of its kind in academia.

Some 15 years later, on Nov. 6, members of Harvard’s now-thriving systems biology community, joined by friends and colleagues from across the country, gathered for the first annual Systems Biology Symposium at the Joseph B. Martin Conference Center.

Highlighted by scientific presentations and emotional recollections, those present celebrated the leadership of Marc Kirschner and the impact and achievements of the past decade and a half of pioneering systems biology research.

“It is hard to convey how important Marc Kirschner has been to HMS, how important he still is and will continue to be in the coming years,” said HMS Dean George Q. Daley in opening remarks at the day-long symposium. “Our school, and indeed the broader scientific community, would not be as vibrant today without him.

“He has been a visionary leader, keenly focused on how to make HMS a more robust, more intellectually rigorous bastion for fundamental inquiry, and I have taken his counsel and his example to heart,” Daley said.

Speaking before a packed auditorium, Daley highlighted the indelible impact that Kirschner has made at HMS, as founding chair of both Cell Biology and Systems Biology.

“For 25 years, Marc has stood as a titan of our community,” Daley said. “Thanks to Marc and the remarkable communities that he helped build and nurture, both departments are flourishing, powerful centers for fundamental discovery that are pushing the frontiers of knowledge in biomedicine.”

Kirschner’s influence on graduate education, Daley said, drove the establishment of the unified biological and biomedical sciences (BBS) program, which allows students to enter a single program spanning multiple departments to experience different labs before committing to a research path.

Kirschner was also instrumental in establishing vital core facilities for the HMS community, including the Institute of Chemistry and Cell Biology (ICCB), one of the first high-throughput screening facilities in an academic setting, and the Nikon Imaging Center.

Outside of Harvard, Kirschner has been no less influential, Daley said. As a staunch advocate for science and young scientists, Kirschner played a major role in convincing the NIH to double its research budget between 1998 and 2003, and he has served as a powerful voice in calls to fix the funding structure of academic science to support the pipeline of talented graduate students and postdocs.

Galit Lahav, chair of Systems Biology and Kirschner’s successor as head of the department, followed Daley’s remarks by highlighting a small sampling of Kirschner’s research legacy. From his contributions to a fundamental understanding of the cell cycle, to the discovery of the protein tau—defects that lie at the heart of neurodegenerative diseases such as Alzheimer’s—to determining how a single-celled egg becomes a multicellular animal, Kirschner’s work has transformed multiple fields in biology, Lahav said.

But his influence on his colleagues was no less profound, she said. At its inception, systems biology was “somewhat the department of people who didn’t fit in other departments,” Lahav said, “a group of scientific misfits who weren’t suited for classical math or biology departments.” But they found a home in Systems Biology because of Kirschner.

“When Marc established the Department of Systems Biology in 2003, none of us really knew what systems biology really meant. Some of us are still not completely sure,” Lahav said. “But he made us feel like we were defining a field, that we were making history. The choices we were making in our labs would determine where the entire department would go and create a prototype that other departments around the world would follow. He made you feel like you are a part of something very big.”

During the symposium, distinguished speakers presented on a variety of systems biology topics, from the collective behavior of ants to the dynamics of aging cells to the mathematics of single-molecule biological events.

Some presenters, such as Angela DePace and Johan Paulsson, are current HMS faculty. Others, such as Kim Cooper and Deborah Gordon, trained at Harvard. All the speakers, however, shared a strong connection with Kirschner, as trainees, colleagues or collaborators. 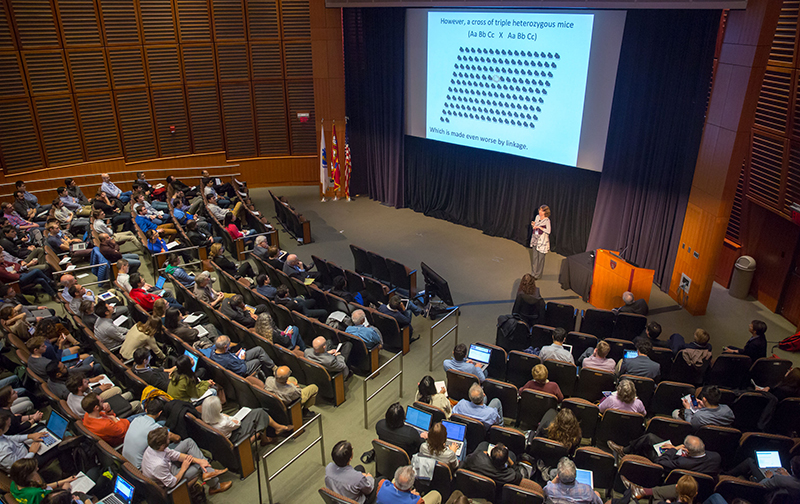 To close the celebration, Kirschner took the podium to deliver a set of remarks on the history of systems biology at Harvard and his ruminations on modern science.

He spoke of the example set by Vannevar Bush, the architect of U.S. scientific policy during World War II, who wrote to President Franklin D. Roosevelt arguing that “the most important advances in warfare, perhaps responsible for saving Western civilization, all came from universities, such as penicillin, the atomic bomb and radar. That, despite the huge amounts of money lavished on army and industrial activity, it was disappointing compared to what unregimented university science accomplished.”

Following this example, Kirschner said, “I believe that the future of science in this country will be determined, not by our industrial or high-tech or national labs, but by our basic educational policy.”

“The early years of Systems Biology at Harvard taught me to see the problem more clearly,” he continued. “I believe that science, at its most creative, is more akin to a hunter-gatherer society than it is to a highly regimented industrial activity, more like a play group than a corporation.”

But the trajectory of modern science appears to be moving away from the playfulness and independence that have spurred so much success, Kirschner warned. “Instead, our courses, our hiring, our promotions, the criteria for papers being published in Nature or Science, our NIH grants, our PhD mentoring, our fellowships, even our awards and honors are built on adherence to a constrained model.”

“As I look back at the best scientists from my own lab or in the departments or universities I have been in, or the great innovators in the scientific fields I know, the element that characterizes these people is playfulness, independence and nonconformity,” Kirschner said.

“With regards to Systems Biology, I would say that I am most proud that we created a little more space to play here,” Kirschner said. “It is hard to monetize this idea of play, but I hope the scientific world gives us enough time to spin off a few remunerative artifacts, so we can still retreat into a corner to think broadly about the world, focusing on the obscure, the unknown and the underappreciated.”

“When I look back at the 25 years here, I have no regrets,” Kirschner concluded. “If you are as lucky as my wife Phyllis and I have been, then the only response to all the hard work and occasional frustration is gratitude for the opportunity.”