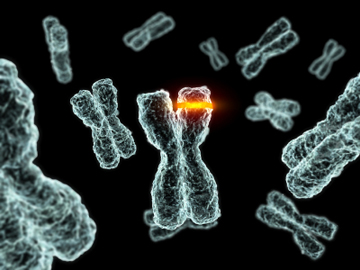 Every year, thousands of babies are born with severely malformed hearts, disorders known collectively as congenital heart disease. Many of these defects can be repaired though surgery, but researchers don’t understand what causes them or how to prevent them.

Although genetic factors contribute to congenital heart disease, new research shows that about 10 percent of these defects are caused by genetic mutations that are absent in the parents and siblings of affected children, suggesting that new mutations that arise spontaneously—known as de novo mutations—might contribute to the disease.

“Until recently, we simply didn’t have the technology to test for this possibility,” said Richard Lifton, chair of the department of genetics at Yale School of Medicine.

Lifton, who is also a Howard Hughes Medical Institute (HHMI) investigator, together with Christine Seidman, a Harvard Medical School professor of genetics at Brigham and Women’s Hospital, as well as colleagues at Columbia, Mt. Sinai and the University of Pennsylvania, collaborated to study congenital heart disease through the National Heart Lung and Blood Institute’s Pediatric Cardiac Genomics Consortium.

Overall, the researchers found that of the de novo mutations that contribute to 10 percent of severe congenital heart disease cases, roughly a third are from the histone-methylation pathway. Lifton noted that a mutation in just one copy of a gene in this pathway was enough to markedly increase the risk of a heart defect.

Direct sequencing of protein-coding regions of the human genomes to hunt down de novo mutations has only been applied to one other common congenital disease — autism. In that analysis, Lifton and his colleagues at Yale, as well as HHMI investigator Evan Eichler and colleagues at University of Washington, found mutations in some of the same genes mutated in congenital heart disease. The same histone modification pathway appears to play a major role in autism as well, raising the possibility that this pathway may be perturbed in a variety of congenital disorders, Lifton said.

Even if the disease can’t be prevented, identifying the mutations responsible for severe heart defects might help physicians better care for children with congenital heart disease.

“After we repair the hearts of these children, some children do great and some do poorly,” Seidman said.

Researchers have long suspected that this might be due to differences in the underlying causes of the disease. Understanding those variations might help doctors improve outcomes for their patients.

Using robust sequencing technologies developed in recent years, the researchers compared the protein-coding regions of the genomes of children with and without congenital heart disease and their parents, and found that new mutations could explain about 10 percent of severe cases.

The results demonstrated that mutations in several hundred different genes contribute to this trait in different patients, but were concentrated in a pathway that regulates key developmental genes. These genes affect the epigenome, a system of chemical tags that modifies gene expression. The findings were published online in the journal Nature on May 12, 2013.

For the current study, the investigators began with 362 families consisting of two healthy parents with no family history of heart problems and a child with severe congenital heart disease. By comparing genomes within families, they could pinpoint mutations that were present in each child’s DNA, but not in his or her parents.

The team focused their gene-mutation search on the exome — the small fraction of each person’s genome that encodes proteins, where disease-causing mutations are most likely to occur. Children with and without congenital heart disease had about the same number of de novomutations — on average, slightly less than one protein-altering mutation each. However, the locations of those mutations were markedly different in the two groups.

“The mutations in patients with congenital heart disease were found much more frequently in genes that are highly expressed in the developing heart,” said Seidman, who is also an HHMI investigator.

The differences became more dramatic when the researchers zeroed in on mutations most likely to impair protein function, such as those that would cause a protein to be cut short. Children with severe congenital heart disease were 7.5 times more likely than healthy children to have a damaging mutation in genes expressed in the developing heart.

The researchers found mutations in a variety of genes, but one cellular pathway was markedly enriched in the children with heart defects. That pathway helps regulate gene activity by affecting how DNA is packaged inside cells. The body’s DNA is wrapped around proteins called histones, and chemical tags called methyl groups are added to histones to control which genes are turned on and off.

In children with congenital heart disease, the team found an excess of mutations in genes that affect histone methylation at two sites that are known to regulate key developmental genes.