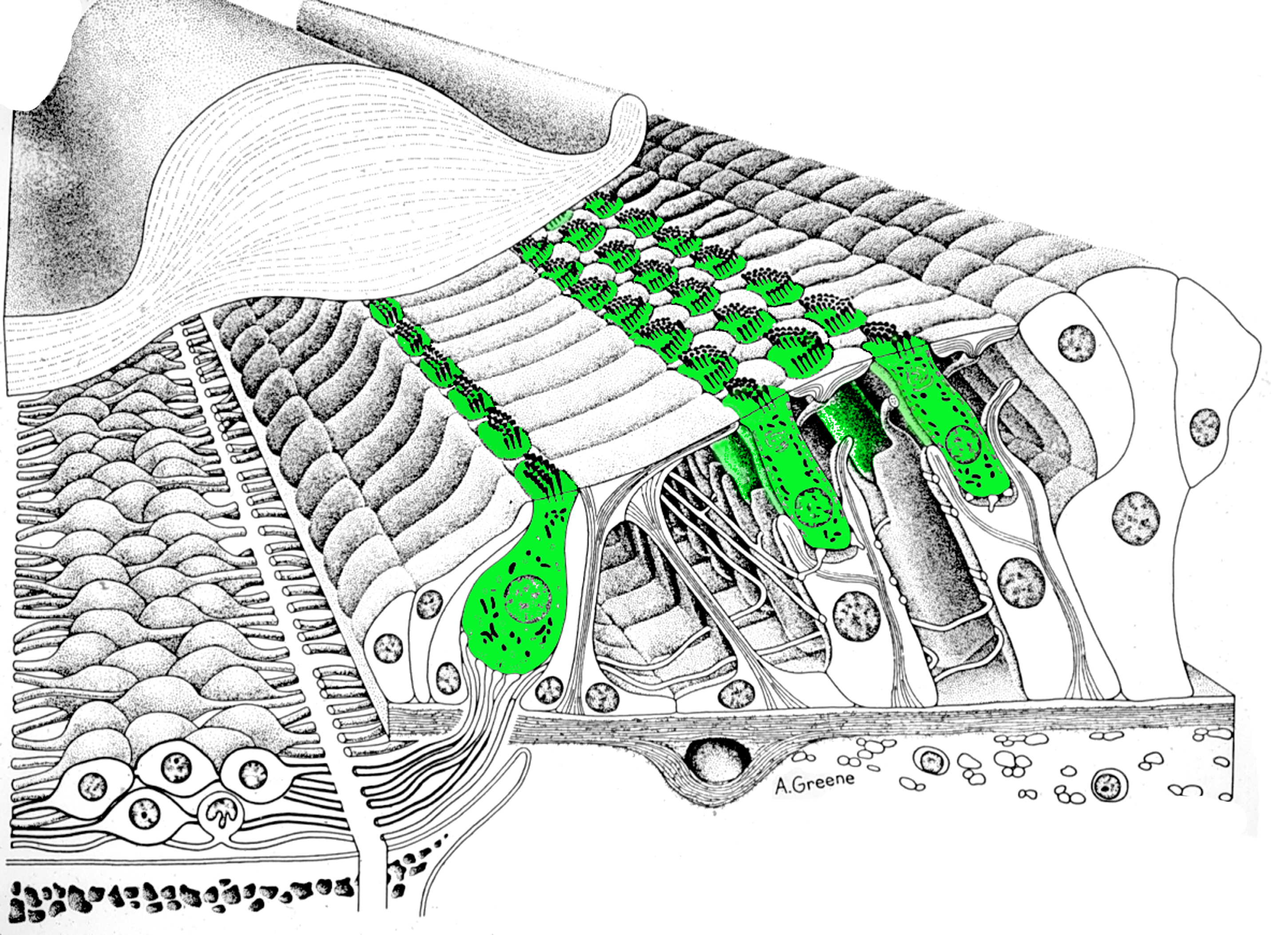 Hair cells (green) inside the cochlea in the inner ear vibrate with sound waves. Image: Courtesy of Nelson Kiang, MEE

Hair cells (green) inside the cochlea in the inner ear vibrate with sound waves. Image: Courtesy of Nelson Kiang, MEE

For balance, five separate patches of hair cells sense movement and tell the brain where the head is in space while translating the pull of gravity.

For hearing, a five cell-wide ribbon of 16,000 hair cells spirals inside the cochlea, the snail-shaped structure where hair cells vibrate in response to sound waves. Every cycle of sound waves sends microscopic cilia on the tips of these cells back and forth, riding a trampoline of cells suspended between two fluid-filled spaces.

The movement opens pores in the cells, allowing electrical current to flow inside.  This conversion of mechanical to electrical signals sends nerve impulses to the brain, which then “hears” the sound.

David Corey, the Bertarelli Professor of Translational Medical Science at Harvard Medical School and a Howard Hughes Medical Institute investigator, has spent his scientific life studying this mechanosensory apparatus, asking which proteins are involved in converting sounds into nerve impulses. So far, only about one-third of those proteins are known. Déborah Scheffer, HMS research associate in the Corey lab, is interested in what makes hair cells different from the cells that surround them in the inner ear.

Their most recent work, published in The Journal of Neuroscience, has revealed that many genes implicated in hereditary deafness are much more active in hair cells than in surrounding cells. This suggests that other genes that produce proteins only in hair cells might also cause inherited deafness. About 1 in 1,000 children are born deaf, and mutations in as many as 300 different genes might cause deafness.

Their findings may also have implications for age-related hearing loss, which affects about half of adults aged 75 or older. Sometimes impairment occurs much earlier, after exposure to harmful amounts of noise.

“This work gives us a parts list that the hair cell uses to assemble different components, helping us figure out the molecular mechanism of sensing sound,” Corey said. “It also tells us which genes drive the unique development of a hair cell, raising the hope that this information can be used to create new hair cells to restore hearing in cases of age- or noise-related hearing loss.”

To understand the hair cells of the inner ear, Corey and Scheffer collaborated with colleagues Jun Shen, HMS instructor in pathology at Brigham and Women’s Hospital, and Zheng-Yi Chen, associate professor of otolaryngology at Massachusetts Eye and Ear, to find out which genes hair cells use that neighboring cells do not. What makes one cell different from another is the choice and the timing of the genes expressed by a cell.

Working in mice engineered to make green fluorescent hair cells, Scheffer devised a way to separately purify hair cells and surrounding cells at different points over about two weeks of mouse inner-ear development. At each point and for each sample, she sequenced the RNA used to make proteins for all 20,000 genes in the mouse genome.

“Now we have a panel of all the genes that are involved in hair cell development,” Scheffer said.

Scheffer and Corey deposited their data in a publicly available database that Shen established three years ago. The Shared Harvard Inner Ear Laboratory Database, or SHIELD, holds gene expression data integrated with comprehensive annotation, including potential locations for deafness genes. Scientists from around the world access the data more than 400 times a day.

Some scientists interested in the molecular biology of hearing and deafness can use SHIELD to identify new deafness genes, which may lead to specific gene therapies. Others want to know what makes a hair cell a hair cell, so they can find a way to make surrounding cells in the inner ear turn into hair cells. These cells do not normally divide, so once they are lost, the only hope is to somehow induce them to divide or to turn neighboring cells into hair cells.

Next, Scheffer will explore microRNA expression in hair cells to see which genes they regulate. That will yield a genetic network of gene expression, messenger RNA and protein production.

“I want to know all the genes that interact with each other and what transcription factors are involved at each step,” she said.

Corey said their work is only the foundation.

“Someday this work will go to the clinic, but first you have to know the parts list.”

This research was supported by National Institutes of Health grants R01-DC000304, R01-DC002281, R03-DC013866 and R01-DC006908; the Frederick and Ines Yeatts Hair Cell Regeneration Grant; P30 DC05209 to the Eaton-Peabody Laboratory of Massachusetts Eye and Ear and a Hearing Health Foundation Emerging Research Grant.