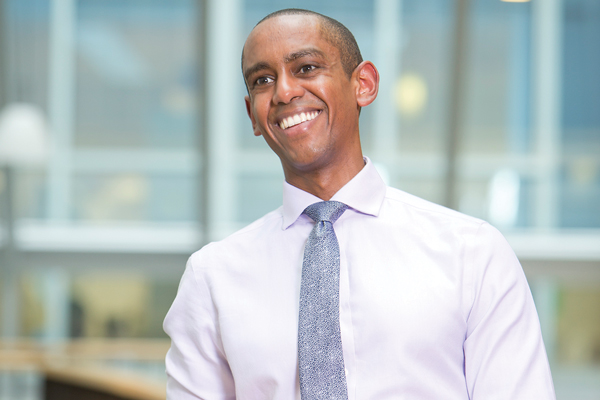 Benyam Kinde holds his parents responsible for his interest in science—but in a good way.

They encouraged Benyam and his older brother, Isaac, who is also a scientist, to ask and seek answers to their own questions.

It helped that Kinde was born with a desire to learn.

“I enjoy asking questions,” he said.

This spirit of inquiry brought Kinde to Harvard Medical School, where he led investigations that uncovered a novel role of the MECP2 protein—which when mutated leads to the devastating neurodevelopmental disorder, Rett syndrome—in regulating gene expression in the developing brain.

By understanding the mechanisms behind the disorder, Kinde and fellow researchers hope to develop therapies that will reverse the symptoms of this debilitating disease. These investigations were published in Nature and the Proceedings of the National Academy of Sciences.

Kinde was already interested in molecular neuroscience when he came to HMS. He knew he wanted to work in the lab of Michael Greenberg, the HMS Nathan Marsh Pusey Professor of Neurobiology, after a meeting where he heard Greenberg describe with care and excitement the projects in his lab.

Greenberg served as Kinde’s thesis advisor, and Kinde said that he appreciates both the enthusiasm and clarity Greenberg brings to the scientific process. He is also grateful for the other mentors in the lab, who have been generous with their time and energy.

Starting in the Greenberg lab during his first year of medical school as part of a rotation, Kinde completed the degree program in 2016.

The MECP2 project attracted him he said, because he “thought it posed a really interesting, mysterious question that was ripe for investigation.”

“They went through a great deal to provide a special environment for my brother and I to develop our passions.” —Benyam Kinde

When he was a child, Kinde’s father, a California pathologist and large animal veterinarian who had immigrated to the U.S. from Ethiopia, introduced Kinde and his brother to understanding disease pathology.

Fascinated with watching his father consumed in the investigative process—from performing a necropsy to examining tissue slides to developing a hypothesis for why an had animal died—Kinde became excited about the applying a methodical approach to understanding the processes that alter normal physiology.

Kinde’s mother was a math instructor at a community college. In addition to encouraging inquiry, she enthusiastically supported her son’s desire to take math and sciences courses at the college while he was still in high school.

He is grateful for the childhood he had growing up in California after his parents moved to the U.S. “They went through a great deal to provide a special environment for my brother and I to develop our passions,” Kinde said.

Carrying on a bit of a family tradition, today Kinde is passionate about inspiring children to question and engage in science. At HMS, he participated in a biweekly outreach program at a Boston-area school where he shared with students the story of his own path from childhood to medical school as a way to get the children thinking about their own future.

Kinde and his brother have enjoyed traveling to Ethiopia where they hope to inspire children to pursue their interests in science.  Last year, the brothers spoke at the elementary school that their father attended in Harar. Kinde said he felt the experience allowed him to give back to the community in gratitude for the opportunity his father had to be educated there, and consequently for his own fortunate childhood in the U.S.

Kinde would like to return to Ethiopia, hoping to continue to serve up-and-coming scientists. “Once you get in the habit of teaching and mentoring other people in science—and the earlier you do that—the easier it is to be integrated into your future career,” he said.

Several programs that are designed to increase the number of underrepresented minorities in the sciences have provided Kinde with financial and educational support along with mentoring and networking opportunities. He credits the Meyerhoff Scholars Program at the University of Maryland, Baltimore County, where he did his undergraduate work, and two Howard Hughes Medical Institute programs, the Exceptional Research Opportunities Program (EXROP) and the Gilliam Fellowships for Advanced Study, for helping him get to this point in his career.

Additionally, Kinde’s brother, who is chief scientific officer at the biotech startup PapGene, remains a steadfast supporter, advising him on scientific questions.

Now in the third year of his MD program, Kinde is going through rotations during the principal clinical experience and hopes to identify the area he would like to focus on as he prepares to pursue a residency.

Kinde’s interest in the brain and brain development is pulling him toward clinical training in neurology. “This is an exciting time to be at the interface of basic neuroscience research and the practice of clinical neurology,” he said.