Special as a Snowflake

By STEPHANIE DUTCHEN May 5, 2016
A virtual tour through the pore. Animation: James Chou

Researchers have determined the structure of part of the tiny passageways that allow calcium ions to enter mitochondria and kick off cellular energy production.

The findings, reported May 2 in Nature, promise to help researchers better understand how the channel, known as the mitochondrial calcium uniporter, works so speedily and precisely and what happens when it breaks—a question of growing interest since mutations in the uniporter have recently been linked to intermittent fatigue and lethargy.

“The uniporter has been a puzzle since its discovery more than half a century ago,” said the study’s senior author, James Chou, professor of biological chemistry and molecular pharmacology at Harvard Medical School. “It’s ancient, but it’s complex. We wanted to know what it looked like because that could help us understand how it works and how others might want to target it with drugs.”

Chou, who specializes in deciphering protein structures, partnered with Vamsi Mootha, professor of systems biology at HMS and professor of medicine at Massachusetts General Hospital, who focuses on mitochondrial biology and disease.

Mootha’s lab had identified all the molecular components of the uniporter in a series of studies between 2010 and 2013, including the pore subunit where calcium gets drawn in, called MCU. He was looking for someone to illuminate the channel’s architecture.

“James’ achievement represents a major advance for the field,” said Mootha, who is a coauthor on the paper. “It offers the first structural blueprint with which to understand the pore.”

Too big to fail

To sketch that blueprint, Chou’s team first had to do some tricky biochemistry to generate the amount of functional MCU needed for a structural study. Ultimately, they coaxed bacteria to produce unfolded MCU molecules. They then harvested the molecules and refolded them.

“We didn’t think we could refold MCU, but it worked,” Chou said.

Another problem loomed: MCU seemed to resist crystallization and was too large for nuclear magnetic resonance.

The team tackled the challenge by chopping off a part of MCU that Mootha’s experiments indicated was dispensable for studying pore formation. The truncated version of MCU still pushed the limits of what NMR could handle, “but it was within our reach,” said Chou. “We just went for it.”

Special as a snowflake

So the researchers stuck their MCU molecules under an electron microscope and took a lot of pictures. Aligning snapshots of molecules with similar orientations provided a low-resolution composite image of MCU’s overall structure—no details, but enough to inform an NMR analysis. 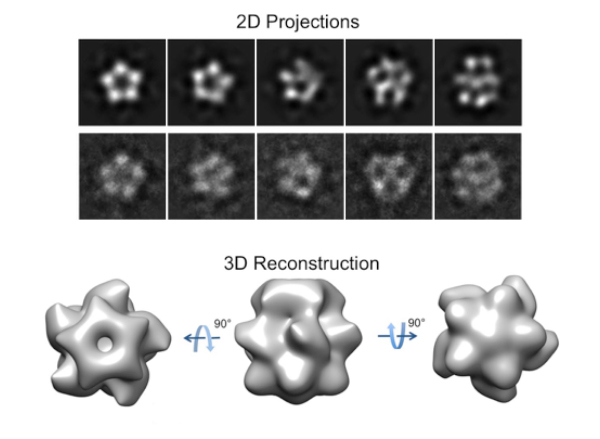 After all its efforts, the team puzzled out one of the largest structures ever characterized using NMR. The results revealed that MCU has a cylindrical shape with the predicted five-fold symmetry when viewed from either end. It also contains an unexpected pair of calcium-recognizing rings near the pore entrance.

All in all, MCU’s structure is unlike the pore of any other known ion channel, such as those that grant passage to potassium and magnesium, said Chou.

MCU’s structure begins to offer an explanation for one of the uniporter’s longstanding mysteries: how it sucks in calcium so quickly while barring entrance to other ions.

“Most ion channels are either highly selective or speedy at transporting ions across the membrane,” explained Chou. How is the uniporter good at both?

Most ion channels have a single ring that binds to the channel’s preferred element and allows it to pass through the mitochondrial or cellular membrane, like checking a person’s ID at the entrance to a secure building. But sometimes the wrong elements slip through. Chou and Mootha suspect that the double ring is crucial for MCU's higher selectivity.

As for speed, the researchers believe that strong negative charges in the rings and MCU’s hydrophilic central pore strip positively charged calcium ions of their accompanying water molecules and suck them in.

“Pore theory predicted there would be two calcium-binding sites close to each other, so it’s very satisfying that the structure reveals these two rings in series,” said Mootha. “Exactly how they work has yet to be determined. It’s now possible to perform further tests to understand how MCU achieves its dual feat of high conductance and high selectivity.”

How calcium ions exit the pore remains to be seen as well.

“You don’t just solve the structure and ‘game over,’” Chou pointed out. “You keep going. There's lots more to be discovered.”

This study was funded by the Chinese Academy of Sciences (grants XDB08030301 and XDB08030201), the National Institutes of Health (grant GM094608) and the Howard Hughes Medical Institute.