Metastasizing breast cancers typically seek out the bones, lung and brain. Brain metastases are especially dangerous; many people survive for less than a year after diagnosis.

How is the cancer able to get past the blood-brain barrier? And can it be blocked?

Those questions led Harvard PhD candidate Golnaz Morad and her mentor Marsha Moses, the Julia Dyckman Andrus Professor of Surgery at Harvard Medical School and Boston Children’s Hospital, to conduct an in-depth investigation of exosomes, also known as extracellular vesicles or EVs, and their role in breast-to-brain metastasis.

Their surprising findings appeared Sept. 3 in the journal ACS Nano.

“Golnaz was able to identify the mechanism by which EVs pass through the blood-brain barrier and provide a ‘niche’ so that breast cancer cells can metastasize to the brain,” said Moses, whose lab is interested in women’s cancers.

Now that they know the mechanism, Moses and Morad hope to identify therapeutic targets that could stop breast-to-brain metastasis.

In the case of cancer cells, EVs carry factors that help create a more hospitable environment for both the primary tumor and its metastases, as Moses and Morad detailed in a recent review article.

Primary tumors can secrete EVs into the circulation, allowing them to travel to distant organs and help spread the cancer.

“The main question we had was, how can EVs reach the brain in the first place?” said Morad. “The blood-brain barrier doesn’t allow anything larger than 400 daltons to passively get into brain tissue. Exosomes are more than two thousand times larger than the size cutoff limit.”

The blood-brain barrier is a complex structure made of three kinds of cells.

EVs traveling in the blood first encounter tightly joined brain endothelial cells. Pericytes make up the next layer, followed by astrocytes—the “feet,” which connect to the cell bodies.

Crosstalk between the cells circles the wagons even tighter: Astrocytes and pericytes send cues to the endothelial cells to tighten the junctions.

Morad, Moses and colleagues worked with several models of the blood-brain barrier, including in vitro microfluidic models (“BBB on a chip”), as well as static in vitro models and live zebrafish and mouse models.

The labs of Donald Ingber, director of the Wyss Institute for Biologically Inspired Engineering and the Judah Folkman Professor of Vascular Biology in the Department of Surgery at Boston Children’s, and Leonard Zon, professor of stem cell and regenerative biology at Harvard and the Grousbeck Professor of Pediatrics at Boston Children’s, collaborated in the development of the BBB-on-a-chip and zebrafish models, respectively.

The Moses Lab also collaborated with the lab of Christopher Carman of the Harvard T.H. Chan School of Public Health for high-resolution imaging.

Together, the researchers showed for the first time that rather than squeezing in between the cells in the blood-brain barrier to get into the brain, EVs trick endothelial cells into taking them up.

Using a standard biological pathway called transcytosis, the cells simply engulf the EVs, bringing them inside and releasing them into brain tissue like so many Trojan horses.

“EVs can also manipulate endothelial cells to facilitate their own transport across the BBB,” said Morad. “They hijack the pathways involved in the uptake and sorting of molecules and change regulation of the pathways.”

Ongoing work in the Moses Lab shows that once the EVs have breached the barrier, they trick astrocytes into sending signals to the surrounding environment, making it more receptive to tumor growth.

An inventory of these signals using mass spectrometry and other techniques identified some that are known to degrade the network of proteins providing structural and biochemical support to brain cells.

For the study, Morad had to develop special methods to harvest the EVs in quantity and to verify their identity.

“They are remarkable little vehicles, but it is very challenging to get enough of them,” said Moses.

Having discovered what EVs do to enable breast-to-brain metastasis, the Moses Lab hopes to turn the tables and use EVs, or synthetic versions, to deliver anticancer drugs that home to the metastatic site. That work is ongoing.

The study, for which the investigators have filed patents, was supported by the Breast Cancer Research Foundation, the National Institutes of Health (R01CA185530, K01DK111790) and the Advanced Medical Foundation. See the paper for a full list of authors. 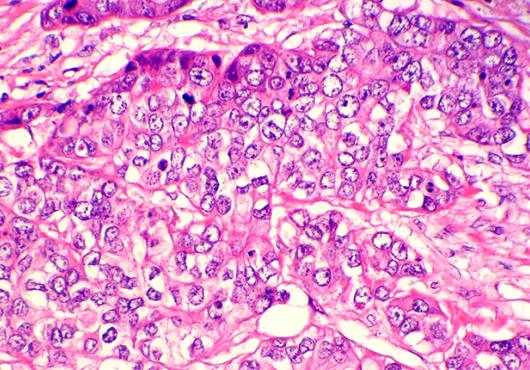