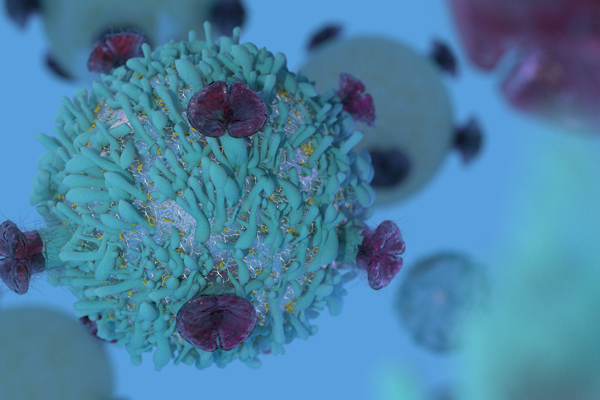 A study led by scientists from Harvard Medical School reveals “hidden” variability in how tumor cells are affected by anticancer drugs, offering new insights on why patients with the same form of cancer can have different responses to a drug.

“Gene expression profiling allows us to identify drugs that are potentially useful when given in combination." —Marc Hafner

The results, published in Nature Communications on Oct 30, highlight strategies to better evaluate drug effectiveness and inform the development of synergistic drug combinations to overcome the ability of tumors to evade treatment.

Based on analyses of over 600 drug and breast cancer cell pairings, researchers showed that, for some cells, drug exposure can cause significant changes in gene expression—indicating the successful action of a drug on its target—without affecting cell growth or survival. This appears to be caused by adaptive resistance mechanisms, which, when identified, can be blocked by other drugs given in combination.

“Our findings suggest new ways of tackling the still-difficult task of working out which patients should receive which drug and how drugs should be combined to maximize therapeutic benefit,” said senior study author Peter Sorger, the Otto Krayer Professor of Systems Pharmacology and director of the Harvard Program in Therapeutic Science and the Laboratory of Systems Pharmacology at HMS.

In collaboration with the Broad Institute of Harvard and MIT, Sorger and colleagues leveraged an approach developed as part of the National Institutes of Health’s Library of Integrated Network-Based Cellular Signatures (LINCS), a large-scale program that aims to amass molecular data from cells following drug exposure to study the mechanisms of drug response.

They collected gene expression data from six genetically diverse breast cancer cell lines, which were each exposed to 109 small-molecule drugs at multiple dosages and time points. Cell growth and survival were assessed in parallel using a method developed by the Sorger lab that corrects for growth rate variations and makes large-scale comparisons of drug response more accurate.

In total, the researchers identified almost 8,000 gene expression signatures that they compared across several dimensions of drug response, including by cell line, drug class, biological pathway, cellular function and more. An interactive visualization of the dataset is available online.

The team found that cell lines appeared to respond to drugs in two broad patterns. One group of drugs—primarily targeting machinery involved in the cell cycle, protein chaperoning or DNA repair—elicited similar patterns of response across all cell lines.

A second group triggered responses that were specific to cell type. Different cell types respond to these drugs in qualitatively different ways. Such drugs largely targeted the signaling pathways that are disrupted by oncogenic mutations—for example, trametinib and alpelisib, which inhibit MEK and PIK3 pathways, respectively, and have been FDA-approved or are undergoing clinical trials for treating certain breast cancers.

“We find that drug-sensitive tumor cells respond in similar ways to some classes of drugs and very different ways to other classes of drugs,” Sorger said. “This was unexpected and suggests fundamental but unrecognized differences in drug action in tumor cells from different individuals having the same disease—in this case, breast cancer.”

While gene expression in most drug-cell line pairings correlated with cell growth and survival, a small subset, roughly 3 percent, had a unique pattern of response. In these cases, drug exposure caused significant changes in tumor cells’ gene expression profile but had no lasting physical effect.

An estrogen receptor-negative cell line known as BT-20, for example, displayed a gene expression response to both trametinib and alpelisib when given individually. Cells continued to grow in both cases, even when exposed to high concentrations of the drugs.

When given in combination, however, the two drugs had a strong synergistic effect and caused cell death across a wide range of concentrations.

Additional analyses revealed that exposure to certain classes of drugs induced molecular changes that allowed BT-20 cells to adapt to the drug, making it less effective. Trametinib appeared to inhibit this adaptive resistance pathway, thereby increasing the effectiveness of the drug it was given in combination with.

“Gene expression profiling allows us to identify drugs that are potentially useful when given in combination. If we had measured only cell survival, it would seem as though each drug was ineffective on its own and should be ignored,” said Marc Hafner, co-lead author of the study and a research fellow in therapeutic science in the Laboratory of Systems Pharmacology.

“The cells can cope when exposed to one of these drugs, but when both are put together, the response is strong enough to stop cell growth and induce death,” he added.

These examples underscore the value of gene expression profiling for revealing subtle mechanisms of drug sensitivity and resistance and providing clues into which drugs might be most effective when tested in combination, according to the authors. The approach could support efforts to develop individualized, precision-targeted treatment for patients based on their tumor’s unique molecular characteristics.

The team is now working to expand their work to include more cell lines and drugs, and they hope to leverage improved datasets to help interpret patient data in future research.

“Our study is not a recipe for generating effective drug combinations, but it can help narrow down candidates and identify which drugs might be most promising when tested in combination,” Hafner said. “In order to go beyond targeting an oncogene and just hoping for the best, we need to understand the actual biological effects of drugs inside cells. That’s how we can have better and smarter use of drugs.”