Gut bacteria (E. coli) exhibit a circadian rhythm after circadian oscillators were transferred from cyanobacteria. The “mother cell” at the top blinks on and off with a 24 hour cycle, visualized through the use of a fluorescent protein marker.

Often referred to as the “body clock,” circadian rhythm controls what time of day people are most alert, hungry, tired or physically primed. However, this complex biological process is not unique to humans.

Circadian rhythms, which oscillate over a roughly 24-hour cycle in adaptation to the Earth’s rotation, have been observed in most of the planet’s plants, animals, fungi and cyanobacteria, and are responsible for regulating many aspects of organisms’ physiological, behavioral and metabolic functions.

Now, scientists led by biologist Pamela Silver have harnessed the circadian mechanism found in cyanobacteria to transplant the circadian wiring into a common species of bacteria that is naturally non-circadian.

The novel work, which for the first time demonstrates the transplant of a circadian rhythm, is reported in a new study in Science Advances.

“By looking at systems in nature as modular, we think like engineers to manipulate and use biological circuits in a predictable, programmable way,” said Silver, who is the HMS Elliott T. and Onie H. Adams Professor of Biochemistry and Systems Biology and a core faculty member at the Wyss Institute for Biologically Inspired Engineering. 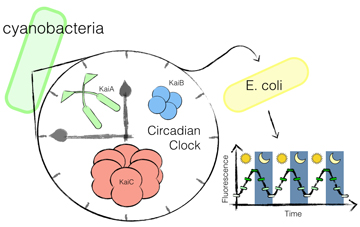 Silver’s team used this methodology to successfully transplant a circadian rhythm into the bacterial species E. coli, which is widely used as a “workhorse” cell species by biologists because it is well understood and easy to genetically alter.

The genetically engineered circadian E. coli designed by Silver could one day be used in probiotic pills as a way to monitor the gut microbiota, the collective and diverse bacterial species that flourish in the human gastrointestinal tract and contribute to many health factors.

The protein circuit was then transplanted into E. coli, where it can be connected to additional gene expression components to potentially influence metabolic and behavioral functions in relation to the day-night cycle.

In the experimental E. coli, the circuit was linked to fluorescent proteins that lit up each time the circadian oscillations were triggered, causing the E. coli to glow rhythmically in a visual confirmation of the transplant’s success.

“The ultimate dream application would be to deliver these circadian E. coli to an individual in pill form, which could allow the circadian rhythm to be linked to additional biological circuits in order to perform a precisely timed release of drugs, or to be able to sense and influence the host’s circadian rhythm,” said the study’s first author, Anna Chen, a systems biology graduate student at the Wyss and HMS.

And further down the road, even the condition known as “jet lag,” which results when high-speed air travel disrupts a person’s body clock function, might someday be treated using circadian E. coli that could be leveraged to reprogram and adjust the body’s circadian rhythm to match the travel destination’s day-night cycle.

“What’s really amazing is that we’ve demonstrated the modularity of biological systems—this finding goes beyond the transplantability of a circadian rhythm to open new doors to understanding how other modular biological circuits could be transplanted from one species to another,” said Silver.