Stimulation and deprivation alter vascular structure in the brain

Nerves and blood vessels lead intimately entwined lives. They grow up together, following similar cues as they spread throughout the body. Blood vessels supply nerves with oxygen and nutrients, while nerves control blood vessel dilation and heart rate.

Neurovascular relationships are especially important in the brain. Studies have shown that when neurons work hard, blood flow increases to keep them nourished. Scientists have been asking whether neural activity also changes the structure of local vascular networks.

According to new research published in the Sept. 3 issue of Neuron, the answer is yes.

The findings challenge a previous belief that, except in cases of disease, genetically encoded cues alone control the construction of vascular networks.

“Genetic programming is responsible for a certain amount of vascular growth in the weeks after birth. We show that an additional component gets lost if you don’t stimulate neural activity through sensory inputs,” said Lacoste, who is first author of the study. “Our model suggests that to fully build up and mature your vascular system, your brain needs genetic programs as well as refinement by neural activity.”

The results could affect the use of medical imaging techniques that measure blood flow, including fMRI, and could inform care for early-life conditions where blood flow in the brain is restricted.

Gu, Lacoste and colleagues at HMS and Brigham and Women’s Hospital used mouse whiskers as their model system. Specifically, they studied an area of the mouse brain called the barrel cortex, where each barrel-shaped bundle of axons (nerve fibers) processes the activity of an individual whisker.

The researchers used gene-based tagging to make the axons they wanted to study glow red and the blood vessels glow green. They also used a high-resolution 3D imaging system and sent their blinded data to collaborators at the University of São Paulo in Brazil for computational analysis.

In successive experiments, they induced sensory deprivation in the mice in three different ways—cauterizing rows of whiskers, genetically reducing the transmission of sensory inputs to the barrel cortex, and removing whiskers—to see if vascular complexity changed.

The team found that when neural activity dropped in the barrel cortex, the lengths of blood vessels and the number of blood vessel branches fell as well.

To be even more certain that sensory-related neural activity altered vascular structure, the team tried the opposite approach: stimulating mouse whiskers. Neural activity increased, as did vessel length and branching.

“It was very interesting to see that sensory deprivation and stimulation have an opposing impact—that the mice’s environment is helping them shape their vasculature,” said Lacoste. “This suggests that sensory stimulation might be important to pay attention to in humans.” 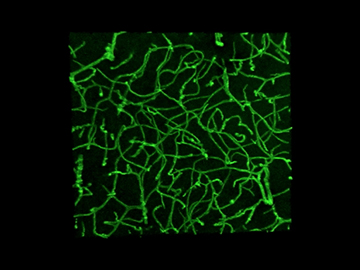 The team’s next step will be to find the bridge connecting neural activity and vascular structure. They suspect the answer may relate to astrocytes, star-shaped cells in the central nervous system that outnumber neurons five to one.

In addition to revealing a possible role for environmental exposure in shaping the brain’s vascular structure, the research provides a more detailed timeline of vascular development in the barrel cortex before and after birth. That could help doctors and researchers better understand whether and when humans experience a “critical period” during which sensory input is crucial for healthy cerebrovascular structure.

Although the findings are preliminary, they could have future clinical implications. Radiologists performing blood-oxygen-level-dependent (BOLD) functional imaging tests such as fMRI, which measure blood flow as an indicator of neural activity, might use additional parameters when studying sensory-deprived areas of the brain, such as those in blind or deaf people, said Lacoste.

The work also raises the possibility that sensory stimulation could counteract some of the vascular damage that occurs in babies who experience strokes or other conditions that restrict blood flow in the brain.

“It may turn out that sensory stimulation increases angiogenesis in the damaged area,” said Lacoste. “Acting at that place at that moment could be beneficial.”

This study was supported by the National Institutes of Health (R01NS064583 and K01DA029044), the São Paulo Research Foundation (FAPESP), the National Council for Scientific and Technological Development (CNPq) in Brazil, the Harvard/MIT Joint Research Grants Program in Basic Neuroscience, a Sloan research fellowship, the Genise Goldenson Research Fund and the Freudenberger award.