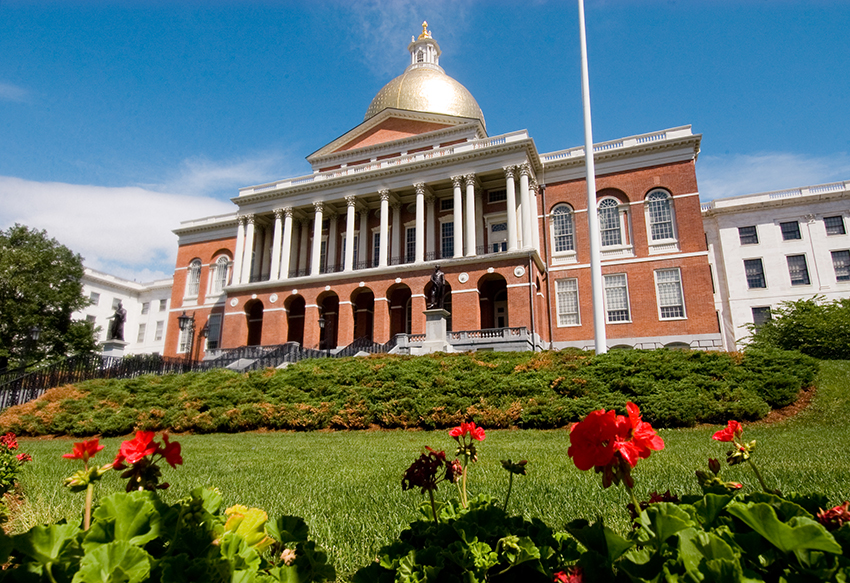 As a science-minded and politically active youth growing up in central Oklahoma, Kayla Davis was fascinated with both science and policy. When Oklahoma made record budget cuts to education in 2016, however, her fascination bloomed into a desire to work at the intersection of these two worlds.

“The state’s decision to sacrifice education spending, especially spending that would help enrich the learning experience of students interested in STEM fields, was heartbreaking to me,” said Davis, now a seventh-year graduate student in Harvard’s Biological and Biomedical Sciences program.

And when the opportunity arose to spend a summer working alongside legislators in the Massachusetts State House, tackling equitable COVID-19 testing and other health care concerns, it was a no-brainer, Davis said.

Over the course of 10 weeks this summer, Davis and three other HMS graduate students spent their time outside of the lab working at the Mass. State House as fellows in the Scientific Citizenship Initiative (SCI) at HMS.

“Scientists and policymakers have a lot to learn from each other,” said Angela DePace, associate professor of systems biology at HMS and founder of SCI. "We hope that building and sustaining these relationships will inspire scientists to take on new types of socially impactful work, including new research questions.”

This is precisely the mission propelling SCI, which was established in 2018 to narrow the gap between scientists and society by offering training and opportunities for civic engagement not typically found in STEM education. SCI programs include coursework, mentoring, networking and the Mass. State House fellowship—a part-time program that gives students practical experience working in policy alongside their studies and lab work.

As part of the fellowship, SCI provides stipends and helps place students into the offices of state legislators. To help the fellows make the most of their time, SCI offers training on science policy and State House functions, as well as mentorship from Daniel Pomeroy, executive director of SCI, and Carl Sciortino, executive vice president of external relations at Fenway Health.

“We believe that giving students and working scientists the skills and opportunities they need to create meaningful connections in the world will not only improve society, but also give scientists a fuller picture of themselves as citizens who are essential to a functioning democracy,” DePace said.

In recent months, communities of every size and composition around the world have confronted generational challenges, highlighted by the COVID-19 pandemic, as well as inequities and social justice. There are no simple solutions to these complex crises, which require civic engagement and cooperation at every level of society to be successfully and sustainably overcome.

The participation of scientists in this discourse is no exception, especially since the need for data and evidence-based input on policy has arguably never been more acute.

“COVID-19 has highlighted the fact that scientific evidence is critical to solve major societal challenges, but also that it alone isn’t enough,” DePace said. “Implementing solutions in the real world shows that thoughtful communication and civic engagement are required to build public trust in science, especially when research is moving quickly.”

Due to the pandemic, this year’s SCI fellows faced unique challenges, including having to carry out their work remotely due to social distancing. However, they also had unique opportunities.

Davis spent her summer as a fellow working with Rep. Natalie Higgins of Leominster. Tasked with researching equitable COVID-19 testing, Davis spent much of her time tracking and following pieces of legislation and writing memos, summaries and talking points.

She worked closely with the representative and this experience revealed to her how influential the voice of scientists can be in policy—a fact highlighted when Higgins quoted her in a session of the progressive caucus, a group of dozens of legislators working to promote social, economic and environmental justice.

“It was a moment that made me very aware that everything I say is being taken very seriously, which is not always the case as a graduate student in academia,” Davis said. “I was in the position where I was the science expert in the room, and it was kind of a wake-up call. Legislators will act on things because we said them.”

Unsurprisingly, COVID-19 policy drew the attention of many of the fellows, especially Colette Matysiak, a fifth-year student in the Harvard Program in Virology. As a member of the lab of HMS immunologist Ulrich von Andrian, Matysiak’s research focuses on the biology of viral respiratory tract infections and, in recent months, directly on aspects of COVID-19.

Armed with a master of public health degree earned prior to joining HMS, Matysiak had the opportunity to immediately contribute to the team of Sen. Will Brownsberger, president pro tempore of the Mass. Senate and a member of the Senate’s working group on COVID-19.

Despite her expertise in virology and global health, there was a significant learning curve.

“In your PhD, you have months or even years to learn and understand a situation,” Matysiak said. “It was a completely different experience working in the senator’s office, where he needed information that day or week. Figuring out how to get high quality information rapidly takes a lot of skill, which I’m still developing.”

As a member of Brownsberger’s team focused on COVID-19 testing, Matysiak had to quickly build a deep understanding of testing across the state, interviewing experts, synthesizing her research and reporting her findings directly to the senator and his team. It was this latter task that was one of the most challenging, according to Matysiak.

In academic science, communications tend to be couched because science is iterative and understanding can change as new evidence emerges. However, Matysiak found that communicating a higher degree of certainty was needed to inform policy decisions.

“As a scientist, my instinct is never to say something like ‘we should definitely do X,’” Matysiak said. “But if I didn’t present my thoughts and ideas with a level of certainty, then legislators were unlikely to act on the information I presented, because if I was uncertain, then they were definitely uncertain.”

“Trying to communicate certainty can be hard, but I think it's important for scientists who want to engage in policy,” she added.

While Matysiak worked directly on an area in which she had existing expertise, she was also exposed to a wide variety of areas of interest to the senator, including police reform, a topic very different from what she encounters normally as a bench scientist.

Such firsthand exposures to the legislative process—like how policymakers respond to current events, or the different stakeholders needed to move legislation forward—were new experiences for the fellows, as was practice with the skills involved in policymaking.

SCI Fellow Jasmin Joseph-Chazan, first-year graduate student in the Harvard Program in Immunology, recently graduated from MIT with a degree in biological engineering.

“How science affects people is something I’ve thought about for a long time, and policy to me is similar to engineering in making sure that we’re doing right by people,” Joseph-Chazan said. “But I didn’t know how to bridge this gap in my own learning.”

Upon entering the program, Joseph-Chazan dove into policy on the team of Rep. Jack Patrick Lewis of Framingham, with a focus on the impact of COVID-19 on health insurance enrollment after loss of employment.

She also had the opportunity to explore other topics important to Rep. Lewis, including education, LGBTQ rights, immigration and more, which allowed her to attend a variety of meetings and to engage with legislators herself.

Joseph-Chazan spent time in her fellowship, for example, working with members of the state’s Medicare-for-All caucus, helping to provide research data and connecting the group with experts. She also directly contributed to Rep. Lewis’ communications, writing press releases and even drafting a letter to the speaker of the house.

While essentially every facet of working in the State House was a new experience for Joseph-Chazan and the other fellows, they were supported throughout the program by SCI staff.

Pomeroy, with a PhD in physics and extensive experience working in science policy, along with Sciortino, who served for a decade as a Mass. state representative, were invaluable resources for the fellows as they navigated the complex work of public policy.

“STEM training rarely, if ever, provides students with an understanding of how to engage with public policymakers. Yet, science is an essential input to the development of policies that address some of our most difficult societal challenges,” Pomeroy said.

“This fellowship program is not only about improving public policy. We also want to provide career development experience for students,” he continued. “Science students and postdocs go on to do all kinds of meaningful and important work in society, and only a fraction of them will do that work in academia. Real world experiences like these allow students to gain skills that will be useful whether they pursue a career in science research, policy or anywhere else.”

While the fellowship has now ended, their time in the State House and the mentoring and resources they received through SCI will be lasting experiences, the fellows said. Some aim to engage in policy in the future as scientists, and others, such as Davis, are actively exploring career options in science policy.

However, for one member of the cohort, the work he initiated in the State House still continues.

Slater Sharp, a third-year student in the Harvard Program in Neuroscience in the lab of HMS neurobiologist Sandeep Robert Datta, studies how mice can safely learn about new foods in their environment by smelling other mice.

With his longstanding interest in politics and public service, the SCI fellowship presented a welcome opportunity to explore policy from the perspective of a scientist at a time when the world seemed to be facing one crisis after another, Sharp said.

Working with Dylan Fernandes, Mass. state representative for Barnstable, Dukes and Nantucket, Sharp had an opportunity to contribute to an area far removed from neuroscience: ocean acidification and climate change.

“We don’t know what resources are needed and how we can begin to prepare for this imminent environmental catastrophe,” Sharp said.

Rep. Fernandes co-leads a commission to study the impact of ocean acidification on the state, but with the legislature’s energy directed toward COVID-19 and elsewhere, efforts to study and address long-term environmental threats have received less attention in recent months, Sharp said.

“This gave me the chance to step into a leadership role where I might have otherwise not been able to,” he said.

Serving as a point of contact for the commission, Sharp brought together experts and leaders from Massachusetts coastal regions for discussions on the state’s capacity for monitoring and responding to ocean acidification. This experience, he said, had many overlaps with his scientific training, such as synthesizing data, ideas and opinions from disparate fields and communicating evidence-based conclusions to others.

His goal is to help compile resources and data and draft a final report for the commission, so that the legislators can create actionable policy proposals by January, the beginning of the new legislative cycle. The report will then serve as foundational evidence to bolster support for the proposed policies.

While his 10-week fellowship has ended, Sharp continues to work with the commission to finalize the report and help policymakers craft new legislation.

“I think we've all been a little bit shocked in the last few years at how far public opinion can be removed from expert opinion, especially on scientific topics,” he said. “That's probably the fault of scientists a little bit, because we haven't engaged with the community as directly and effectively as we should have.

“I think there should be more scientists working on policy and more politicians trained in science,” Sharp said. “So, I offered to stay on the project.”