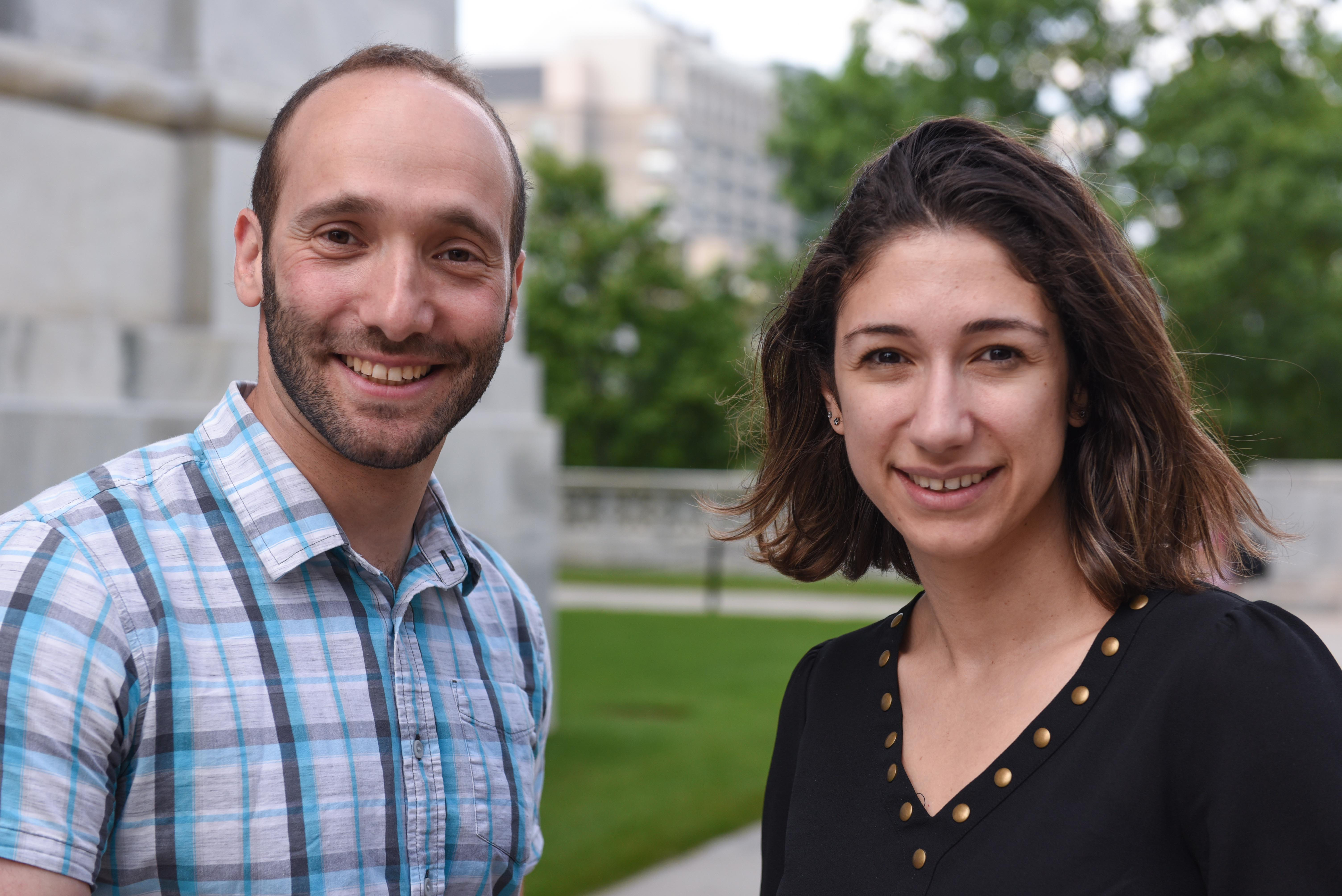 A mathematician and a pulmonologist walk into a bar…

As tales of unlikely convergences go, this one is about the improbable intersection of big data and clinical efforts to combat bacterial drug resistance. Except in this case, the paths of mathematician Michael Baym and pulmonologist Maha Farhat crossed in the Department of Biomedical Informatics at Harvard Medical School.

Farhat and Baym are the newest faculty members of a young but rapidly growing department aspiring to improve diagnoses and catalyze treatments by translating information into practical clinical knowledge.

Farhat and Baym are on a quest to do just that.

“We met very recently and, as it turns out, we have a lot of common threads in our work,” Farhat said.

For one, they share a passion for unraveling the evolutionary mysteries of microbial drug resistance and curbing its spread. They also each harbor a belief that the most promising pathway to solving drug resistance lies in using large-scale genomic data and computation.

“We ended up basically identifying the same problem taking a very similar angle on a solution, despite coming from completely different backgrounds and skill sets,” Baym said.

As an idealistic first-year medical student at Montreal’s McGill University, Farhat set out to find her professional raison d’être among the diseases that cause the greatest morbidity and mortality.

“I was shocked to find out that TB was still one of the top five causes of death and the number one infectious disease killer globally,” Farhat said. 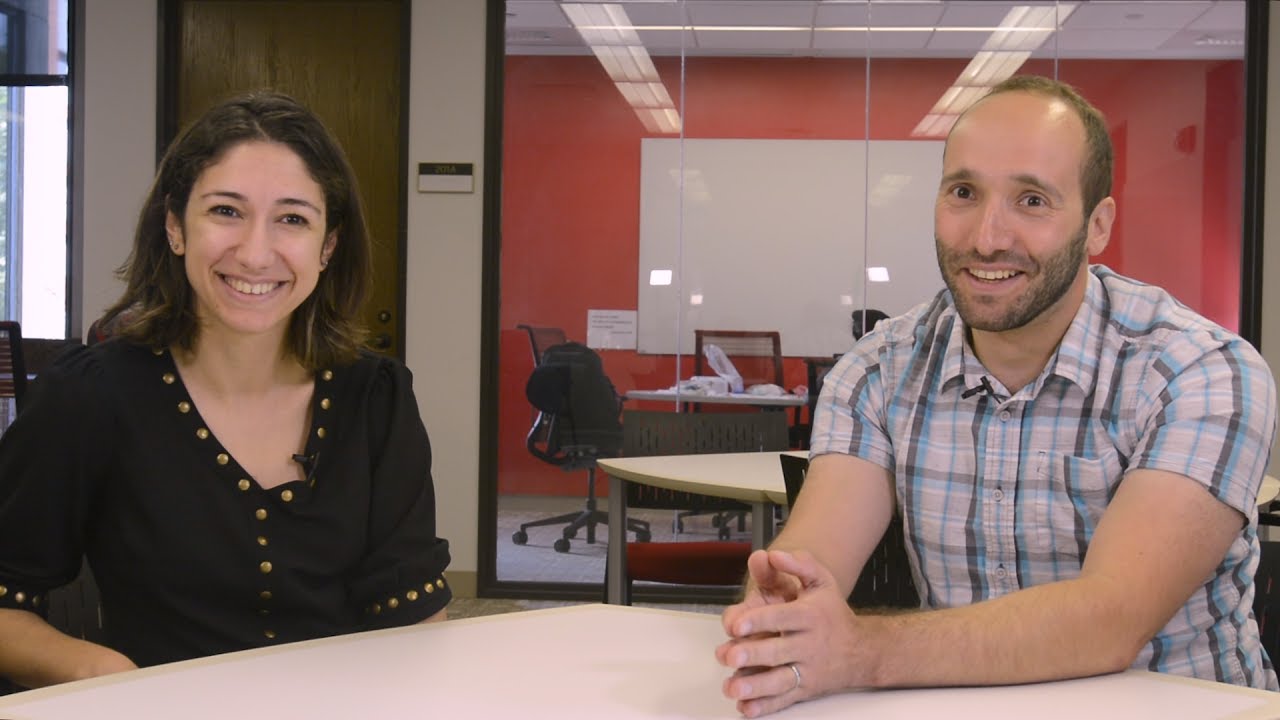 One of Farhat’s formative experiences was her collaboration with pulmonologist Dick Menzies, of the Montreal Chest Institute. He spent his mornings researching diagnostic tests for TB and his afternoons taking care of patients and doing procedures.

Smitten by such intellectual dexterity, Farhat decided she too wanted to pursue life as a physician-scientist. Farhat helped Menzies design a clinical calculator to help physicians interpret results of the tuberculin skin test—the most commonly used screen for exposure to TB. The test requires injecting a small amount of TB protein in a person’s forearm and observing the skin reaction to determine past exposure to the germ. This test, however, is by itself a notoriously unreliable predictor of actual infection.

The TB calculator that Menzies and Farhat developed used an algorithm that, in addition to factoring in the size of the skin welt, also included a range of patient characteristics to drive a more accurate interpretation. This experience was Farhat’s first encounter with the notion that computation could aid the design of clinical tools.

“It really got me interested in how one could take information and data and collate them in a user-friendly format to maximize their clinical use,” Farhat says.

These days, Fahrat uses decidedly more sophisticated methods. She is working to define the diversity of the TB genome as a way to understand genetic differences across TB strains and how such differences predict variations in response to treatment. Even so, her current work is very much philosophically aligned with her earlier experiences as a student.

“The premise is the same as the work we did with the TB calculator—developing the right methods, but, perhaps more importantly, putting them in a context that clinicians can use easily,” Farhat says. “This is where I see myself.”

Baym has been always fascinated by evolution’s elegant simplicity—a set of basic rules and patterns creating life’s astounding complexity over a period of time.

While working on his doctorate in computational biology at MIT, he attended a talk on antibiotic resistance. It was a eureka moment for him. Drug resistance, Baym realized, was at its core an evolutionary phenomenon—bacteria adapting to and surviving an environmental challenge.

Baym started to talk to evolutionary biologists everywhere. During these conversations, one name kept popping up: Roy Kishony, then a professor of systems biology at Harvard Medical School. His work involved experiments in evolutionary manipulation. Baym cold-called Kishony. One thing led to another and Baym ended up as a post-doc in Kishony’s lab.

Very quickly, Baym realized, that in order to harness evolution in any practical way, scientists had to define the genetic characteristics of an organism not merely on the level of the species but within the individual organism. In the context of bacterial infections, this means genetically analyzing strains in individual patients and tracking how the bacterium evolves to survive drug therapies.

Scaled-up, the approach could lead to valuable insights about the ways in which bacteria mutate to adapt to the combined pressures of drugs and the immune system.

In TB, such scaling up would first require cataloguing hundreds of thousands of TB genomes—a point the scientific community is rapidly approaching, Farhat said.

“We expect that in the next few years, we’ll have more than 100,000 different TB genomes sequenced,” Farhat said. “Currently, there are about 20,000 TB genomes in the public domain.”

Insights gleaned from such an array of data could lead to the development of therapies that avert or interrupt microbial mutations.

Such level of analysis could also help scientists profile and predict the behavior of a bacterial strain beyond its ability to mutate and survive drugs. For example, the data could yield clues about virulence or infectivity, such as whether a particular strain of TB is more likely to cause infection of the brain—TB meningitis—or the more commonly seen infection of the lungs.

Large-scale genomic data could also spark the design of point-of-care tests that detect the precise genetic subtype, including resistance-fueling mutations, within mere hours. By contrast, the current approach takes up to two months and involves collecting sputum from a patient, sending it to a lab and performing an antibiotic screen to determine which medication the bacterium responds to.

This means that for up to two months, patients are treated with drugs based on an imperfect guesstimate of their likelihood of carrying a resistant strain rather than actual evidence.

“This cuts to the core of the problem,” Baym said. “Clinicians don’t have access to enough data fast enough to make proper decisions about treatments.”

A newly developed molecular TB test—now gaining wider use—can detect resistance within a few hours to the drug rifampin—a first-line therapy. Rifampin, however, is only one of an arsenal of TB drugs that clinicians use routinely.

Developing new and more exquisitely sensitive point-of-care TB tests demands the sampling of hundreds of thousands of patients with a given infection to define the circulating strains. The strains then would have to be analyzed genetically so that the tests can be calibrated to detect a wide range of mutations.

Point-of-care testing could be particularly transformative for TB care outside the United States, where the greatest disease burden is. In the United States, all patients diagnosed with TB are automatically tested for resistant forms of the infection. Elsewhere, the vast majority of patients are given the standard treatment, and resistance testing is only performed if a patient shows poor response to the drug therapy after two months of treatment.

But having large amounts of genomic data won’t, by itself, be enough to solve the problem, Farhat said.

“In order for us to be able to make the leap to using whole genome sequencing in point-of-care diagnostics we really have to understand the basic biology of each organism and the genetic markers of resistance.”

Driving evolution to a breaking point

When it comes to mutation and survival, every organism adapts and mutates up until it reaches a breaking point. That breaking point varies from organism to organism but generally results from a several pressures, such as drugs or the immune system, beyond which the organism can no longer adapt. Figuring out the breaking point for each bacterial strain and devising therapies that deliver that lethal punch would be the holy grail on the quest to curb microbial resistance.

In the case of TB, this may mean devising precision-targeted therapies or a combination of therapies that disarm the specific mutation that enables survival.

“You can treat an infection with a certain combination of therapies that will either work or fail in one of a handful of ways. If we can understand and predict these in advance, we can respond accordingly,” Baym said. “That’s the broad idea.”

This approach would precipitate a shift away from broad-spectrum treatments that target all possible mutations and strains toward ultra-narrow spectrum drugs that precision-target specific mutants within the pool of bacterial cells affecting individual patients.

The difference between where the standard of treatment is now and where Farhat and Baym aim to get would be akin to the recent shift in cancer care: away from carpet-bombing therapies to using a tumor’s genomic profile to individualize treatment.

“We would no longer just classify infectious diseases as TB or E.coli but subtype to the level of particular mutations within each person,” Farhat said.

Upping the price of a microbe’s survival

For germs, resistance doesn’t come cheap. The process of adapting to a pressure alters the microbe’s cellular machinery. It taxes it. Even though the changes allow the pathogen to become resistant, they harm the cellular apparatus in different ways. This, Farhat said, is the “fitness cost” an organism pays for its survival. As a result, the mutant cell starts to grow more slowly. Over time, as the cell tries to outcompete others, it will eventually accumulate a second set of mutations that compensate for the loss of cellular fitness. This second set of mutations—so-called compensatory mutations—could represent another therapeutic target.

“Once you open the door to respond predictively to evolution, there’s a whole range of treatment strategies,” Baym said. “There’s a large but not infinite way to get resistance. We know we need more data than we have right now but we think that if we collect enough, we can define all of the ways that bacteria use to become resistant.”