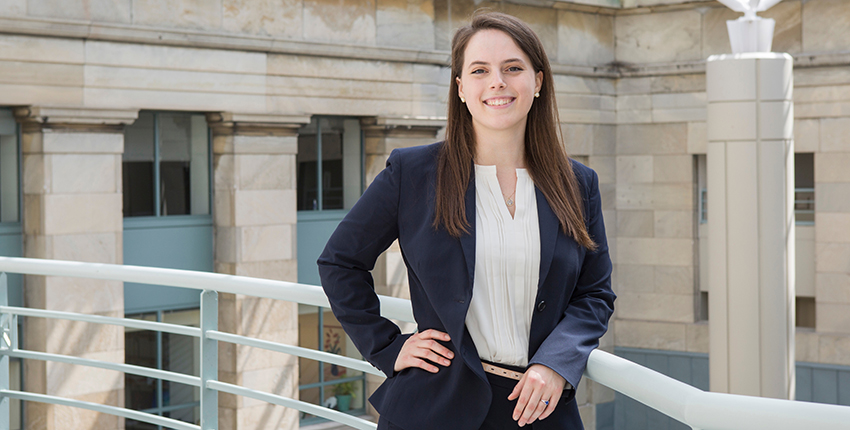 Being grounded in logic but open to serendipity has made all the difference for Amy Schade, a PhD candidate in the Division of Medical Sciences Virology Program, who is graduating this month.

Certain from a young age that she was going to be a history teacher and debate coach, Schade said she made a choice that was “pretty much on a whim”—but ended up being career-altering.

During freshman orientation at the University of North Texas, Schade and her classmates were asked to break into groups by major. Although she was planning on majoring in history, she didn’t opt for the history group.

“I’m going to see what else is out there,” Schade thought, figuring that since she had enjoyed biology in high school, she should check out that major.

During that orientation session, Schade also met Lee Hughes, a professor who would become an important mentor throughout college. She learned that Hughes was offering a freshman research course instead of the typical first-year biology lab. Schade took the class, where she and her classmates collected soil samples, identified viruses in the sample that infected a soil bacterium called Mycobacterium smegmatis and characterized any novel viruses that they found.

On her first day in the course, Schade thought, “Wow, you can just find new viruses?” She said it opened her mind to the concept of discovery.

“The idea that there are still unknowns. That was what the research really exposed me to,” she said.

For her dissertation project, Schade studied in the lab of James DeCaprio, HMS professor of medicine at Dana-Farber Cancer Institute. The focus was on two repressors of the cell cycle, the Rb protein and the DREAM complex.

“We study how a normal cell progresses through the phases of the cell cycle from quiescence and what happens if Rb or DREAM is lost,” Schade said.

By understanding the mechanisms of the cell cycle, researchers hope to control cancer, she said.

“If you can teach a cancer cell to go back into quiescence, then you can stop it from growing and reduce the tumor growth,” Schade said.

Schade has honed her persuasion skills. Throughout high school and college, she was on debate teams, where she gained experience she felt would serve her well in her science career.

“The logic was something that I really liked about debate,” she said, adding that she finds similarities in the puzzles that science presents.

“It’s the same sort of thinking,” Schade explained. Once you have the results from an experiment, there are many possible follow-up experiments, “but which is the most interesting? The most feasible? The most logical?”

Learning how to prioritize experiments was one of the most important things Schade said she learned in her doctoral training. Sometimes, the next step is doing what will challenge the hypothesis.

In DeCaprio’s lab, Schade found a potentially exciting phenotype, a characteristic that could shed new light on the mechanics of Rb and DREAM in the cell cycle.

She recalled DeCaprio asking which experiment scared her most, thus teaching her that it wasn’t wise to get too invested in any one hypothesis early on.

Doing the experiment that challenges the hypothesis first, she discovered, could be a defining moment because it could exclude uninteresting outcomes.

“Then, you have really good confidence that pursuing the hypothesis is worth your time,” she said.

Schade went ahead and did the scary experiment, and the data added new understanding to the findings of previous research.

“We found that DREAM and Rb cooperate to repress the cell cycle and gene expression,” she said, adding that the ultimate goal would be to “design better therapeutics or identify patient populations that might benefit from being treated with an existing class of drugs.”

Mentors like Hughes and DeCaprio have nurtured her growth as a scientist—giving her a good balance of support with the freedom to explore. But one graduate teaching assistant in that freshman bio research course also played a key role.

“It’s satisfying to teach someone a skill and to be part of the teaching process.” —Amy Schade

“It was nice to get feedback from someone who was closer to my age,” Schade said. “That was essential for me to envision myself doing science.”

As a senior grad student in DeCaprio’s lab, she has been able to return the favor for undergrads and first- and second-year grad students.

“It’s satisfying to teach someone a skill and to be part of the teaching process,” she said.

Now that she’s graduating, Schade is excited about future choices. She would like to pursue academic research, with her next career step being a postdoctoral research position.

Schade is grateful to have had a fellowship from the Harvard Landry Cancer Biology Consortium, which she said was important to her graduate career, allowing her to “meet other grad students and professors at Harvard … and see what they are doing.”

“The rules aren’t written down somewhere, right? You need people around to teach you,” she said. “I’m very thankful for them.”