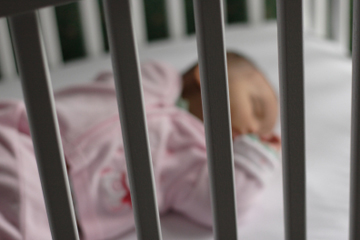 A new study suggests that many infants dying suddenly and unexpectedly in all kinds of sleep environments have underlying brainstem abnormalities.

The researchers, led by Hannah Kinney, professor of pathology at Harvard Medical School and Boston Children’s Hospital, also point to the need to detect and treat this underlying vulnerability early. They report their findings in the December issue of Pediatrics.

The investigators have shown over the past two decades that infants who die suddenly, unexpectedly and without explanation—whose deaths are generally attributed to sudden infant death syndrome (SIDS)—have differences in brainstem chemistry that set them apart from infants dying of other causes.

These abnormalities impair brainstem circuits that help control breathing, heart rate, blood pressure and temperature control during sleep and, the researchers believe, prevent sleeping babies from rousing when they rebreathe too much carbon dioxide due to inadequate ventilation, breathe too little oxygen or become overheated from overbundling.

At the same time, epidemiologic studies have shown that infants dying suddenly and unexpectedly are often found sleeping face down with their face in the pillow, or sleeping next to an adult in a bed—environments that have the potential to lead to smothering and death by asphyxia.

In the new study, Kinney and colleagues asked if all these infants are truly normal. They re-examined their data, reviewing the cases of 71 infants who died suddenly and unexpectedly, were autopsied at the San Diego County Medical Examiner’s office from 1997 to 2008 and had brainstem samples available for analysis. The researchers grouped the infants according to sleep circumstances—those that were considered likely to generate asphyxia and those that were not—based upon death-scene investigation reports.

In the end, they compared 15 infants with SIDS whose deaths were deemed not to involve asphyxia (group A), 35 infants with SIDS whose deaths were possibly asphyxia-related (group B) and 9 infants who clearly died from other causes (controls). They excluded the other infants for either insufficient data or evidence of other clear risk factors for death, such as exposure to drugs or extremes of temperature.

Brainstem neurochemical abnormalities involving serotonin, serotonin receptors, GABA receptors and 14-3-3 (a protein that regulates serotonin) were found in both group A and group B. Infants in these two groups had the same brainstem abnormalities, even though group A had no environmental risk factors for asphyxia. Both groups had significant biochemical differences from the controls.

“Even the infants dying in a potentially asphyxia-generating situation had an underlying brainstem abnormality that likely made them vulnerable to sudden death if there was any degree of asphyxia,” Kinney said. “The abnormality prevents the brainstem from responding to the asphyxial challenge and waking.”

The investigators believe these findings confirm that sudden unexplained death in infants is associated with underlying vulnerabilities, and that not all infants who die in compromised sleep environments are normal.

“Certainly, there are compromised sleeping environments that can cause any baby to die, such as entrapment in the crib, but if it’s just sleeping face down, the baby who dies may have an underlying brainstem vulnerability,” said Kinney. “We have to find ways to test for this underlying vulnerability in living babies and then to treat it. Our team is focused now upon developing such a test and treatment.”

Kinney emphasized that the government’s “Safe to Sleep” campaign (formerly called “Back to Sleep”) has saved thousands of infant lives, and has likely included vulnerable babies.

“Safe sleep practices absolutely remain important, so these infants are not put in a potentially asphyxiating situation that they cannot respond to,” she said.