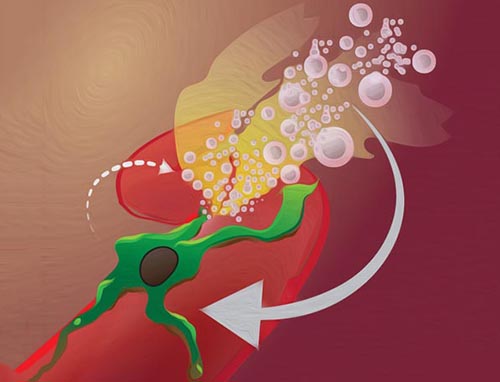 In this illustration, a macrophage (green) induces leakage from a tumor blood vessel (red), which releases nanoparticles into the tumor tissue (yellow). Image: Miles Miller and Ralph Weissleder/Mass General.

In their Science Translational Medicine report, the investigators describe finding how appropriately timed radiation therapy can improve the delivery of cancer nanomedicines as much as 600 percent by attracting macrophages to tumor blood vessels, which results in a transient “burst” of leakage from capillaries into the tumor.

“The field of nanomedicine has worked to improve selective drug delivery to tumors for over a decade, typically by engineering ever more advanced nanomaterials and often with mixed clinical success,” said first author Miles Miller, HMS instructor in radiology at Mass General. “Rather than focusing on the nanoparticles themselves, we used in vivo microscopy to discover how to rewire the structure of the tumor itself to more efficiently accumulate a variety of nanomedicines already in clinical use.”

Encapsulating cancer drugs in nanoparticles can improve how a drug is absorbed, distributed, metabolized and excreted by extending a drug’s presence in the circulatory system and avoiding the toxic solvents used in infusion chemotherapy.

But in clinical practice, delivering nanoencapsulated drugs into patients’ tumors has been challenging, largely because of known factors in the microenvironment of the tumor. High pressures within tumors and low permeability of tumor blood vessels limit the passage of drugs into tumor cells.

A 2015 study by Miller and his colleagues showed that tumor-associated macrophages can improve delivery of nanoparticle-based therapies to tumor cells, and radiation therapy is known to increase the permeability of tumor vessels. But exactly how these effects are produced and how they could be combined to enhance nanomedicine delivery was not known. Answering those questions was the goal of the current study.

Experiments in mouse models of cancer revealed that radiation therapy produced important changes in the tumor microenvironment, including greater blood vessel size and permeability and an increase in the number of macrophages relative to tumor cells. These changes did not appear until three to four days after administration of radiation therapy and disappeared by day 11.

Analysis of patient biopsy samples taken before and several days after radiation therapy for breast or cervical cancer revealed significant macrophage expansion in post-radiation samples, with the greatest increases in patients receiving the highest radiation dosage.

Additional mouse studies showed that, beginning three days after radiation therapy, the uptake of nanoparticles, but not of solvent-delivered drugs, approximately doubled. High-resolution in vivo microscopy revealed that increases in vascular permeability occurred erratically with periods of low permeability interrupted by a bursting of vascular contents, including nanoparticles, into the tumors.

The rate of bursting increased three days after radiation and was higher on larger blood vessels with adjacent macrophages. Removal of macrophages prevented the radiation-induced changes and the increased uptake of nanoparticles.

Testing the therapeutic effect of combining radiation therapy with a nanoparticle-encased chemotherapy drugs in a mouse model confirmed the efficacy of the strategy and the key role of macrophages.

While combining radiation with a solvent-based drug had no benefit compared with radiation alone, delivery of a nanoencapsulated version of the same drug three days after radiation therapy eliminated most tumors, an effect that was significantly reduced if macrophages were depleted.

“Most of the treatments and nanomedicines employed in this study are FDA approved for cancer treatment, so this combination treatment strategy could be tested in clinical trials relatively quickly,” he added. “And given the role of macrophages in this approach, we are particularly interested in combining tumor irradiation and nanomedicine with immuno-oncology therapies.”