How amniotic and cerebrospinal fluids talk to the developing brain 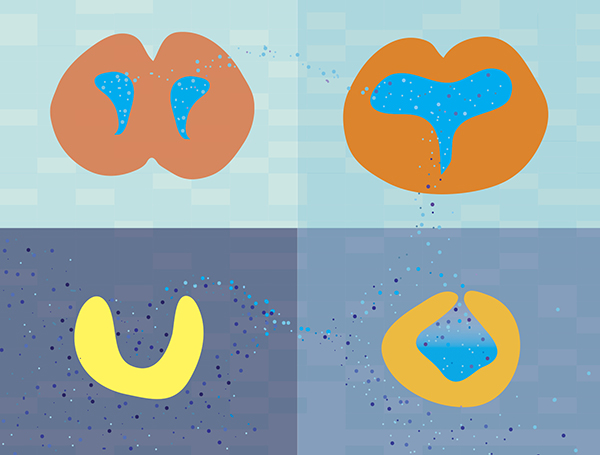 Counterclockwise, from bottom left: In the earliest stage of nervous system development, the amniotic fluid is rich with proteins, shown as dots, that communicate with neural stem cells. As the neural tube closes and the brain takes shape, the proteins become fewer and less complex. Image: Hillary Mullan, Boston Children’s Hospital

Counterclockwise, from bottom left: In the earliest stage of nervous system development, the amniotic fluid is rich with proteins, shown as dots, that communicate with neural stem cells. As the neural tube closes and the brain takes shape, the proteins become fewer and less complex. Image: Hillary Mullan, Boston Children’s Hospital

When we were developing in the womb, we were immersed in amniotic fluid. As our nervous systems formed, some of this fluid was trapped inside the neural tube, forming the cerebrospinal fluid that bathes our brains.

In the past, these fluids have been seen as a cushion or a place to dump waste products. But new research suggests that they actively participate in nervous system development.

This week in Developmental Cell, researchers led by Maria Lehtinen, Harvard Medical School assistant professor of pathology, and graduate student Kevin Chau in the Department of Pathology at Boston Children’s Hospital showed that amniotic fluid and cerebrospinal fluid (CSF) contain rich portfolios of proteins that tell neural stem cells how to divide and what kinds of cells to make. They also showed that the messages change in different phases of development.

In a 2011 mouse study, Lehtinen, with neurogeneticist Christopher Walsh, HMS Bullard Professor of Pediatrics and Neurology at Boston Children’s, and colleagues, showed that proteins in CSF signal neural stem cells to divide faster or to put growth on pause, depending on the age of the mouse. They also showed that the brain is closely tuned to these signals.

Wanting to dig deeper, Lehtinen and Chau decided to collaborate with Hanno Steen, HMS associate professor of pathology and director of the Proteomics Center at Boston Children’s. Again working in mice, they harnessed proteomics techniques to systematically measure and compare the fluids’ protein makeup at multiple times during early nervous system development.

They started with amniotic fluid early in development, when there is not yet a brain but a neural tube. They looked again soon after the neural tube closed, entrapping what would become the CSF. They looked yet again after different structures and regions in the brain began forming. In the latest stage, they looked in the fluid-filled brain cavities known as ventricles.

They were able to show how the protein profiles of the fluids diverge during early brain development.

“The amniotic fluid early on is super-rich in proteins,” said Lehtinen. “After neural tube closure, the number and complexity of proteins decreases in both amniotic fluid and CSF.”

First author Chau notes that many of the proteins they found are interesting and worthy of further investigation, such as components of a signaling pathway known as LIF, which regulate the development of glial cells and affect the number of divisions stem cells make.

In further experiments, the team cultured neural stem cells from different periods of nervous system development, varying the fluids they were immersed in, and found that the fluid environment affected stem cell health and type. Stem cells developed best when they were in fluid from the correct stage of development.

Lehtinen believes this finding could have implications for understanding how factors during pregnancy—from nutrition to maternal substance abuse to environmental toxins—could disrupt a child’s early brain development, especially around the time when the neural tube closes.

“During early development, the fluid is a place where maternal factors come into play,” she explained. “There’s a critical time window when proteins in the amniotic fluid and CSF can influence neural stem cells. If you disrupt the specification of neural stem cells when the nervous system is just a few cells thick, it could affect the development of brain structures down the road.”

Lehtinen plans to extend the research to find out exactly how the fluid and neural stem cells are interacting, what factors are being regulated at the molecular level and how these interactions change in models of disease.

“For example, some people believe that autism can result from maternal infection in early pregnancy. Using the techniques we developed, we could investigate how infections change the makeup of amniotic fluid and CSF,” said Lehtinen. “This work provides an exciting starting point for many studies.”