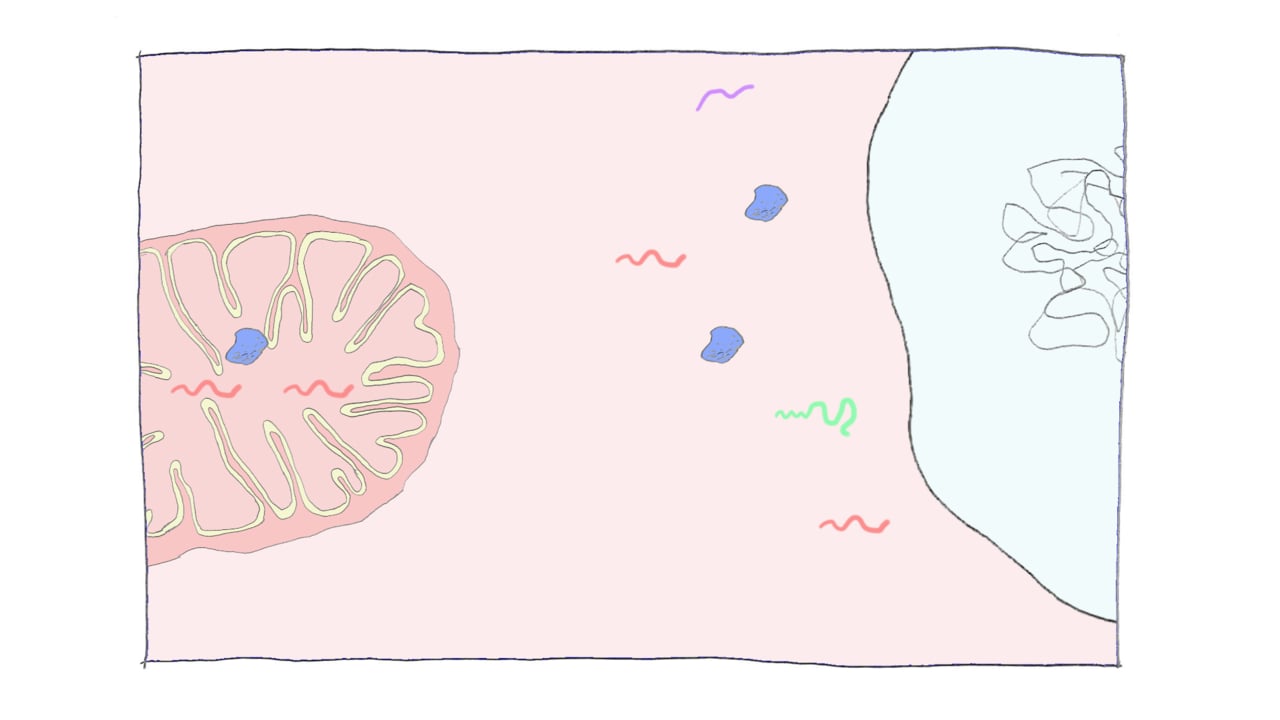 Our cells contain two different genomes: one in the cell nucleus and another in the mitochondria. Each has its own distinct machinery and evolutionary origin.

Both genomes contribute proteins to build the power plants that fuel our cells. For years, researchers have wondered: Do the nucleus and mitochondria talk to each other to coordinate energy production? If so, how?

To find out, members of the lab of Stirling Churchman, assistant professor of genetics at Harvard Medical School, are eavesdropping on the conversation.

They report in Nature on May 11 that in Saccharomyces cerevisiae, or baker’s yeast, the nucleus and mitochondria do work together. They discovered that the coordinated effort is directed by the nucleus and occurs at a later stage than anticipated, not when genes are read but instead when proteins are made.

“A lot of attention has gone to studying gene expression and translation in the cell nucleus and cytosol”—the fluid in which cell organelles float—“but we didn’t know much about them in the mitochondria,” said Mary Couvillion, a postdoctoral researcher in the Churchman lab and first author of the paper.

The team was able to discover “this really elegant synchronization,” Couvillion said, by taking RNA sequencing methods and translation protocols designed to study the nuclear genome and modifying them to study the mitochondrial genome.

The researchers are making these tools available so others can use them to further investigate questions such as how mitochondrial genes respond to shifting energy demands that occur during physical activity, eating, embryonic development and aging.

Although the findings still need to be confirmed in human cells, the results of this study could also help researchers better understand mitochondrial disorders as well as diseases and conditions that have been linked to mitochondrial dysfunction, such as cancer, neurodegeneration, obesity and aging.

From chaos to coordination

The team began by switching the type of sugar fed to the yeast cells, which prodded them to change how they produce energy.

“The cells said, ‘We need to beef up our mitochondria,’ the same way our muscle cells do when we exercise—and we watched how they did that,” said Churchman.

In the cell nuclei, genes that encode proteins for various power plant components switched on and started churning out RNA copies. Mitochondrial genes did the same, but at a slower rate, to the researchers’ surprise.

Then the chaos began to coalesce.

As if an invisible conductor raised a baton, the nuclear RNAs exited into the cytosol.

The baton lowered. Ribosomes in the cytosol and ribosomes in the mitochondria went to work on all the RNAs associated with the first three power plant components. After a few hours, the ribosomes had constructed the protein parts for those components.

With another swoop of the conductor’s baton, both sets of ribosomes then translated the RNAs for the power plant’s fourth component.

“Looking back, it all makes sense—obviously the nuclear and mitochondrial genomes have to produce the protein parts synchronously,” said Churchman. “But it wasn’t understood at what level coordination occurs. Now we know.”

One major question remained: Who was wielding the conductor’s baton? Were the cytosolic and mitochondrial ribosomes communicating directly, or were they responding to external signals?

But when the team inhibited mitochondrial protein translation, cytosolic translation continued on as usual.

“That tells us the nucleus is in charge,” said Churchman.

One aspect of the study that fascinates Couvillion is “how our environment, including the food we eat, affects gene expression,” she said. “Now that we’ve done these relatively quick experiments in yeast, we’re looking forward to moving into mammalian cells to find out what’s going on in our own bodies.”