Much like the current financial crisis, the aging process might also be a product of excessive deregulation.

Researchers have discovered that DNA damage decreases a cell’s ability to regulate which genes are turned on and off in particular settings. This mechanism, which applies both to fungus and to humans, might represent a universal culprit for aging. 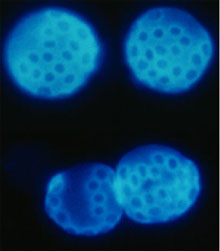 “This is the first potentially fundamental, root cause of aging that we’ve found,” said HMS professor of pathology David Sinclair. “There may very well be others, but our finding that aging in a simple yeast cell is directly relevant to aging in mammals comes as a surprise.” The findings appear in the Nov. 28 issue of Cell.

Scientists have known that a group of genes called sirtuins are involved in the aging process. When activated by chemicals like resveratrol (found in red wine) or by caloric restriction, the genes appear to have a positive effect on aging and health.

Nearly a decade ago, Sinclair and colleagues in the MIT lab of Leonard Guarente found that a particular sirtuin in yeast affected the aging process in two specific ways—it helped regulate gene activity in cells and repair breaks in DNA. As DNA damage accumulated over time, however, the sirtuin became too distracted to properly regulate gene activity, and as a result, characteristics of aging set in.

“For 10 years, this entire phenomenon in yeast was considered to be relevant only to yeast,” said Sinclair. “But we decided to test if this same process occurs in mammals.”

Philipp Oberdoerffer, a postdoctoral scientist in Sinclair’s lab, used a microarray platform to probe the mammalian version of the yeast sirtuin gene in mouse cells. The results corroborated what Sinclair, Guarente, and colleagues had found in yeast 10 years earlier. 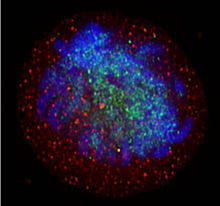 Oberdoerffer found that a primary function of sirtuin in the mammalian system was to oversee patterns of gene expression. While all genes are present in all cells, only a select few need to be active at any given time. If the wrong genes are switched on, this can harm the cell. As a protective measure, sirtuins guard genes that should be off and ensure that they remain silent. To do this, they help preserve the chromatin packaging that wraps the genes tightly and keeps them inactive.

The problem for the cell is that sirtuins have another important job. When DNA is damaged by UV light or free radicals, sirtuins act as emergency responders. They leave their genomic guardian posts and aid the DNA repair mechanism at the site of damage.

During this unguarded interval, the chromatin package may start to unravel, and the genes that are meant to stay silent may switch on.

For the most part, sirtuins are able to return to their post and wrap up the genes again before permanent damage ensues. As mice age, though, rates of DNA damage increase (typically caused by degrading mitochondria). The authors found that this damage pulls sirtuins away from their posts more frequently. As a result, deregulation of gene expression becomes chronic. Chromatin unwraps in places where it should not as sirtuin guardians work overtime putting out fires around the genome, and the unwrapped genes never return to their silent state.

In fact, many of these haplessly activated genes are directly linked with aging phenotypes. The researchers found that some of these unregulated mouse genes were persistently active in older mice.

“We then began wondering what would happen if we put more of the sirtuin back into the mice,” said Oberdoerffer. “Our hypothesis was that with more sirtuins, DNA repair would be more efficient, and the mouse would maintain a youthful pattern of gene expression into old age.”

That is precisely what happened. Using mice genetically altered to model lymphoma, Oberdoerffer administered extra copies of the sirtuin gene or fed the animals the sirtuin activator resveratrol, which in turn extended their mean lifespan by 24 to 46 percent.

“It is remarkable that an aging mechanism found in yeast a decade ago, in which sirtuins redistribute with damage or aging, is also applicable to mammals,” said Guarente, the Novartis professor of biology at MIT, who is not an author on the paper. “This should lead to new approaches to protect cells against the ravages of aging by finding drugs that can stabilize this redistribution of sirtuins over time.”

Both Sinclair and Oberdoerffer agree with Guarente’s sentiment that these findings may have therapeutic relevance.

“According to this specific mechanism, while DNA damage exacerbates aging, the actual cause is not the DNA damage itself but the lack of gene regulation that results,” Oberdoerffer said. “Lots of research has shown that this particular process of regulating gene activity, otherwise known as epigenetics, can be reversed—unlike actual mutations in DNA. We see here, through a proof-of-principle demonstration, that elements of aging can be reversed.”

Recent findings by Chu-Xia Deng of the National Institute of Diabetes, Digestive and Kidney Diseases has also found that mice that lack sirtuin are susceptible to DNA damage and cancer, reinforcing Sinclair and Oberdoerffer’s data.

Students may contact David Sinclair at david_sinclair@hms.harvard.edu for more information on this or other lab projects.