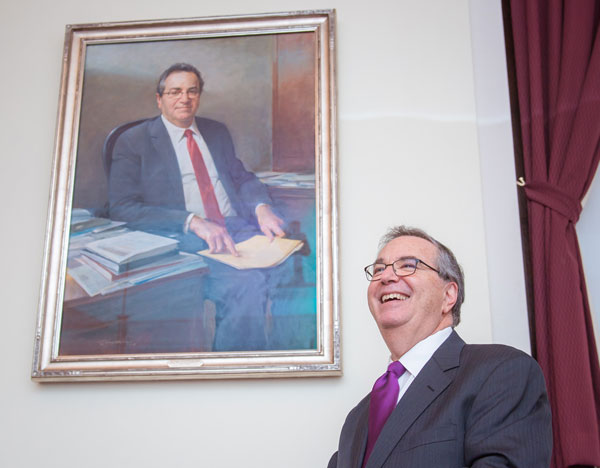 Portraits of Harvard Medical School deans have lined the walls of Gordon Hall’s Waterhouse Room since the Longwood campus first opened in 1906. It’s a 110-year-old tradition that continues today, with historic portraits adorning the walls of the room that was once the HMS library.

A portrait of the man for whom the room is named, Benjamin Waterhouse, hangs above the fireplace. Waterhouse was one of the three founders of HMS and also the man who introduced the smallpox vaccine to America. Oliver Wendell Holmes, whose portrait also hangs in the room, was the sixth HMS dean and a famous physician, anatomist and highly acclaimed poet.

At the end of September, the newest addition to the Waterhouse Room, a portrait of Jeffrey S. Flier, was unveiled at a celebration for the former dean, who stepped down as the School’s 21st dean at the end of July after nine years at the helm.

“The thought that my portrait now hangs among these, allowing me, at least symbolically, to watch over the School that I love, is very, very meaningful to me,” said Flier, who is now the George Higginson Professor of Physiology and Medicine and a Harvard University distinguished service professor, in remarks to a crowd of guests invited for the celebration.

“The contributions Jeff has had here will leave a lasting impact on students and faculty for years to come.” — Barbara McNeil, acting dean

Acting Dean Barbara McNeil welcomed friends and colleagues who filled the room to congratulate Flier on his years of distinguished achievements as dean of the Faculty of Medicine.

“I can’t possibly do justice to the remarkable career Jeff had here at Harvard Medical School,” said McNeil. “The contributions Jeff has had here will leave a lasting impact on students and faculty for years to come.”

Flier recognized and thanked the portrait artist, Burt Silverman, who has created covers for Time magazine and the New Yorker and has been painting and exhibiting his work for 60 years. Flier said he chose Silverman to paint his portrait because he was “impressed by the quality and integrity of his work in his portraits and his other wonderful paintings and drawings.”

Flier also thanked his friends, family, colleagues and school supporters who came to share the celebration with him, including his wife, Terry Maratos-Flier. Two colleagues spoke, Lee Nadler, the HMS Virginia and D.K. Ludwig Professor of Medicine and dean for clinical and translational research, and Joshua Boger, the founder and former CEO of Vertex Pharmaceuticals, chair of The World Is Waiting: The Campaign for Harvard Medicine, and a former chair of the HMS Board of Fellows.

Nadler commended Flier for accomplishments as dean, saying he will be remembered for his “brilliance, selflessness and commitment to always doing the right thing.”

“Jeff Flier forced us to think and act beyond our traditional borders of inquiry,” said Nadler. “He created innovative programs to empower the next generation to embrace the evolving needs of local, national and global patients.”

Flier ended his own remarks with a bit of whimsy.

“I always wondered whether, in the evenings, after all the meetings were over, and the lights were dimmed, the former deans emerged from their canvases, perhaps glowing a bit in the dark as in a Harry Potter movie, to exchange ideas, and, perhaps, to criticize the mistakes of the sitting dean,” said Flier. “Well, if they do—and I hope they do—I’d be happy if my ‘portrait self’ would join them.”