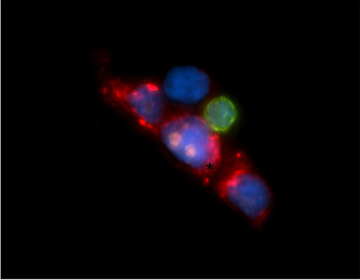 An analysis of circulating tumor cells (CTCs) in a mouse model of pancreatic cancer has identified distinct patterns of gene expression in several groups of these cells, including significant differences from the primary tumor that may contribute to their ability to spread. In a paper published in Cell Reports, Harvard Medical School investigators at the Massachusetts General Hospital Cancer Center pinpointed several different classes of pancreatic CTCs and found unexpected factors that may prove to be targets for improved treatment of the deadly tumor.

“Our ability to combine a novel microfluidic CTC isolation device, developed here at Mass General, with single-cell RNA sequencing has given us new biological insights into these cells and revealed novel avenues to try to block the spread of cancer,” said lead author David T. Ting, HMS assistant professor of medicine at Mass General.

Pancreatic cancer is among the most deadly of tumors because it spreads rapidly via CTCs carried in the bloodstream. The earliest technologies for isolating CTCs from blood samples relied on interactions with known tumor-specific marker proteins, potentially missing cells that did not express those particular markers.

The device used in the current study, called the CTC-iChip, enables the isolation of all CTCs in a blood sample, regardless of the proteins they express on their surface, by removing all other components. Since the CTCs collected are in solution, unlike with previous CTC capture devices, they are suitable for advanced RNA-sequencing techniques to reveal the gene expression patterns of each individual cell.

Using a well-known mouse model of pancreatic cancer, the researchers first isolated 168 single CTCs from the blood of five individual mice. Analysis of the RNA transcripts of each CTC revealed several different subsets of CTCs based on gene expression patterns that were different from each other and from the primary tumor.

Another gene expressed by almost all classic CTCs, Igfbp5, is expressed only in primary tumors at locations where epithelial cancer cells interface with the supporting stromal cells that provide a nurturing microenvironment. This observation suggests that those regions may be the source of CTCs.

The research team was most surprised to observe that extracellular matrix (ECM) genes in general—usually expressed primarily in stromal, or connective tissue, cells—were highly expressed in all classic CTCs. Previous studies have suggested that the establishment of metastases depends on the appropriate cellular microenvironment—the  “soil” in which CTCs can plant themselves as “seeds”—and that the expression of ECM genes is an important aspect of that environment. Expression of ECM genes by CTCs themselves suggests that the blood-borne cells may provide or help prepare their own “soil.”

Analysis of CTCs from blood samples of human patients with pancreatic, breast or prostate cancer also found elevated expression of several ECM genes. One particular gene, SPARC, was highly expressed in all pancreatic CTCs as well as in 31 percent of breast CTCs. Further experiments revealed that suppressing SPARC expression in human pancreatic cancer cells reduced their ability to migrate and invade tissue, and significantly fewer metastases were generated when SPARC-suppressed pancreatic tumors were implanted into a mouse model, supporting the protein’s role in a tumor’s metastatic potential.

“Given our limited therapeutic options for pancreatic cancer, understanding the role of the ECM in this tumor seems to be of great importance,” said Ting. “Much effort has been focused on targeting the microenvironment to improve the efficacy of chemotherapy, and data indicating that environmental stromal cells can enhance a tumor’s metastatic ability indicate that ECM proteins are important whether they are produced in stroma or within the tumor cells themselves. Now we need to investigate whether therapeutically targeting ECM can destroy both the tumor microenvironment and CTCs before they have a chance to metastasize.”

In 2011 Mass General entered a collaborative agreement with Janssen Diagnostics to establish a center of excellence in CTC research. Development of RNA in situ hybridization biomarkers was done with sponsored research support from Affymetrix Inc. Additional support for the current study includes a “Dream Team” grant from Stand Up to Cancer and grants from the Howard Hughes Medical Institute, Burroughs Wellcome Fund, National Institute of Biomedical Imaging and Bioengineering grant 5R01EB008047, and National Cancer Institute grant 2R01CA129933.