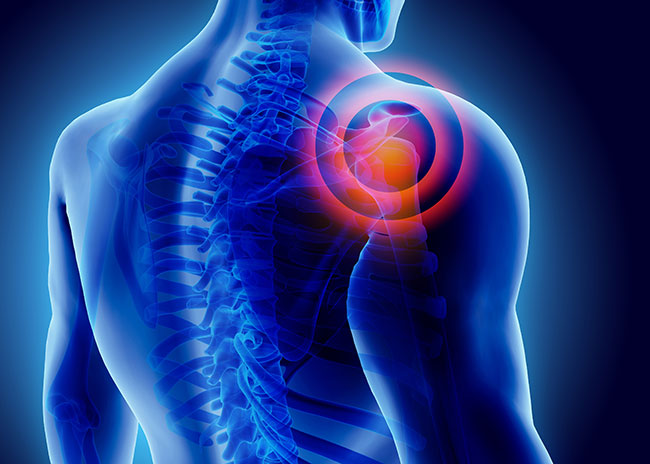 Researchers have identified the nerve-signaling pathway behind the deep, sustained pain that sets in following injury.

A toddler puts her hand on a hot stove and swiftly withdraws it. Alas, it’s too late—the child’s finger has sustained a minor burn. To soothe the pain, she puts the burned finger in her mouth.

Withdrawing one’s hand to avoid injury and soothing the pain of that injury are two distinct evolutionary responses, but their molecular origins and signaling pathways have eluded scientists thus far.

Now research led by investigators at Harvard Medical School, published Dec. 10 in Nature, identifies the nerve-signaling pathway behind the deep, sustained pain that sets in immediately following injury. The findings also shed light on the different pathways that drive reflexive withdrawal to avoid injury and the subsequent pain-coping responses.

Clinical observations of patients with neurological damage together with past research have outlined the distinct brain regions that differentiate between the reflexive withdrawal from a skin prick, for example, and the long-lasting pain arising from tissue injury caused by the pinprick.

The new study, however, is the first one to map out how these responses arise outside the brain.

The findings, based on experiments in mice, put into question the validity of current experimental approaches for assessing the efficacy of candidate pain-relief compounds. Most current methods rely on measuring the initial, reflexive response that serves to avert tissue injury, rather than on measuring the lasting pain that arises from actual tissue damage, the researchers said.

As a result, they said, some drug compounds that might have been successful in assuaging the sustained pain—the lasting sensation of pain that immediately follows injury—could have been dismissed as ineffective because they were assessed against the wrong outcome.

“The ongoing opioid crisis has created an acute and pressing need to develop new pain treatments, and our findings suggest that a more tailored approach to assessing pain response would be to focus on sustained pain response rather than reflexive protective withdrawal,” said study senior author Qiufu Ma, professor of neurobiology in the Blavatnik Institute at Harvard Medical School and a researcher at Dana-Farber Cancer Institute.

“All these years, researchers may have been measuring the wrong response,” Ma added. “Indeed, our results could explain, at least in part, the poor translation of candidate treatments from preclinical studies into effective pain therapies.”

Previous work by Ma and colleagues, as well as others, points to the existence of two sets of peripheral neurons—the nerve cells located outside the brain and spinal cord. One set of peripheral nerve cells send and receive signals exclusively to and from the superficial layers of the skin.

As a first-line of defense against external threats, these peripheral nerve cells are geared toward preventing injury by triggering reflexive withdrawal—think pulling your hand after a pinprick or to avoid the hot tip of a flame. Another set of neurons are dispersed throughout the body and thought to drive the lasting pain that sets in after initial injury and induces pain-coping behaviors such as pressing a banged finger or licking a cut in the skin to sooth the damaged area.

Yet the existence of these neurons could not fully explain how the pain signal travels throughout the body and to the brain. So, Ma and colleagues proposed the existence of another critical player in this relay.

The team focused on a set of neurons called Tac1 emanating from the so-called dorsal horn, a cluster of nerves located at the lower end of the spinal cord that transmit signals between the brain and the rest of the body. The precise function of Tac1 had remained poorly understood so Ma and colleagues wanted to know whether and how these neurons were involved in the sensation of sustained pain.

In a series of experiments, the team assessed pain response in two groups of mice—one with intact Tac1 neurons and another with chemically disabled Tac1 neurons.

Mice with inactivated Tac1 neurons had normal withdrawal reflexes when exposed to a painful stimulus. They showed no notable differences in their withdrawal from pricking or exposure to heat and cold. However, when the researchers injected the animals with burn-inducing mustard oil, they did not engage in the typical paw licking that animals perform immediately following injury. By contrast, mice with intact Tac1 neurons engaged in vigorous and prolonged paw licking to assuage the pain.

Similarly, mice with disabled Tac1 neurons showed no pain-coping responses when their hind paws were pinched—something that induces sustained pain in humans. These animals did not engage in any paw licking as a result of the pinch. Such loss of sensitivity to a specific type of pain mimics the loss of sensation seen in people with strokes or tumors in a particular area of the brain’s pain-processing center—the thalamus—that renders them incapable of sensing lasting pain.

These observations confirm that Tac1 neurons are critical for pain-coping behaviors stemming from sustained irritation or injury but that they play no role in reflexive-defensive reactions to external threats.

Next, researchers wanted to know whether Tac1 neurons shared a common connection with another class of neurons, called Trpv1, present throughout the body and already known to drive the sensation of lasting pain induced by injury. Mice that had functional Tac1 but nonfunctioning Trpv1 neurons responded weakly to pinch-induced pain, showing minimal paw licking. The finding suggests that pain-sensing Trvp1 neurons connect to Tac1 neurons in the dorsal horn of the spinal cord to transmit their signals.

“We believe that Tac1 neurons act as a relay station that dispatches pain signals from the tissue, through Trpv1 nerve fibers all the way to the brain,” Ma said.

Taken together, the results of the study affirm the presence of two lines of defense in response to injury, each controlled by separate nerve-signaling pathways. The rapid withdrawal reflex is nature’s first line of defense, an escape attempt designed to avoid injury. By contrast, the secondary, pain coping response helps reduce suffering and avert widespread tissue damage as a result of the injury.