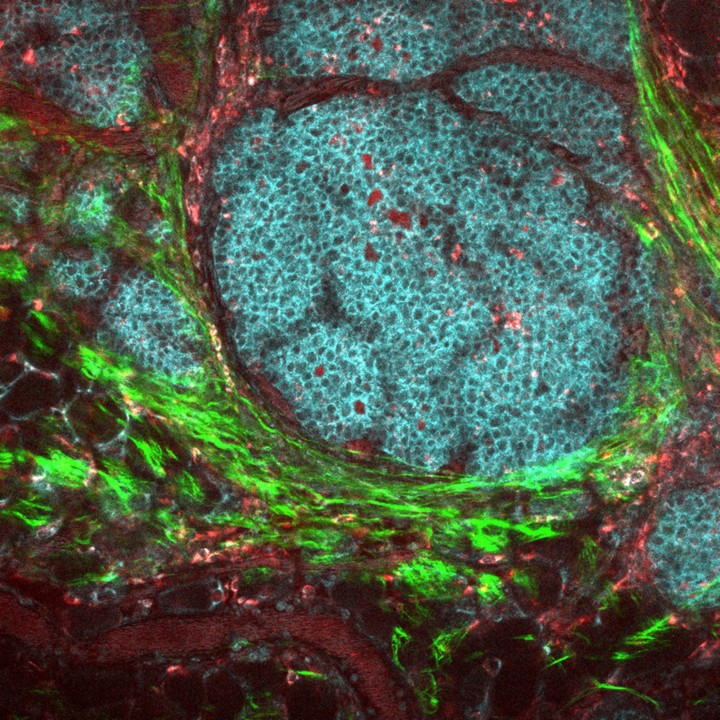 An image of a breast tumor and its local environment. Tumor cells display in cyan, macrophages in red, collagen fibers in green. Image: National Cancer Institute

Breast cancer cells recycle ammonia, a waste byproduct of cell metabolism, and use it as a source of nitrogen to fuel tumor growth, report scientists from Harvard Medical School in the journal Science.

The findings, published online ahead of print on Oct. 12, show that the presence of ammonia accelerates proliferation of cultured breast cancer cells, while suppressing ammonia metabolism can stunt tumor growth in mice.

The insights shed light on the biological role of ammonia in cancer and may inform the design of new therapeutic strategies to slow tumor growth, the researchers said.

“Classically, ammonia was thought to be metabolic waste that must be cleared due to its high toxicity,” said senior study author Marcia Haigis, associate professor of cell biology at HMS.

“We found that not only was ammonia not toxic for breast cancer cells, it could be used to feed tumors by serving as a source for the building blocks that tumors need to grow,” she said.

Rapidly growing cells, particularly cancer cells, consume nutrients voraciously and generate excess metabolic waste. One such byproduct, ammonia, is normally transported in blood vessels to the liver, where it is converted into less toxic substances and excreted from the body as urea.

Tumors, however, have few blood vessels, and as a result, ammonia accumulates in the tumor’s local environment at concentrations that would be toxic for many cells.

To investigate how tumors cope with high levels of ammonia, Haigis and her colleagues used a technique to label the nitrogen on glutamine. When glutamine is broken down during cell metabolism, ammonia containing labeled nitrogen is released as a byproduct.

Tracing the fate of this marked ammonia, the researchers analyzed more than 200 different cellular metabolites in breast cancer cells and in human tumors transplanted into mice.

They found cancer cells recycled ammonia with high efficiency, incorporating it into numerous components—primarily the amino acid glutamate, a fundamental building block for proteins, as well as its derivatives. Around 20 percent of the cellular glutamate pool contained recycled nitrogen.

Higher concentrations of ammonia appeared to accelerate the growth of lab-grown breast cancer cells. Ammonia-exposed cells doubled up to seven hours faster than cells grown without ammonia. In 3-D cultures—a technique that allows cells to divide in all directions as they do inside the body—ammonia exposure increased the number of cells and surface area of cell clusters by up to 50 percent compared with cells grown without ammonia.

“We found that repressing ammonia metabolism stunts tumor growth in mice,” said Jessica Spinelli, a graduate student in the Haigis lab and first author on the study. “Therefore, inhibition of ammonia assimilation or ammonia production may be rational strategies for therapy design.”

The team’s findings indicate that the biological role of ammonia should be reevaluated, laying the foundation for the investigation of new approaches to block tumor growth by depriving tumors of essential nutrients. The researchers are now exploring the therapeutic implications of ammonia metabolism in cancer.

Additional authors on the study include Haejin Yoon and Alison Ringel, who are both postdoctoral researchers in the Haigis lab, as well as Sarah Jeanfavre, research associate, and Clary Clish, director of the Metabolomics Platform, at the Broad Institute of MIT and Harvard.