Oral contraceptive use not associated with increased birth defects risk

By AMY ROEDER January 7, 2016
First author Brittany Charlton explains how the study was conducted and why the results should reassure women and health care providers. Video: Harvard T.H. Chan School of Public Health

Oral contraceptives taken just before or during pregnancy do not increase the risk of birth defects, according to a new study by researchers from Harvard Medical School, Harvard T.H. Chan School of Public Health and the Statens Serum Institut in Denmark.

They found that the prevalence of major birth defects was consistent (about 25 per 1,000 live births) across all pregnant women in the study population regardless of contraceptive use.

“Women who become pregnant either soon after stopping oral contraceptives, or even while taking them, should know that this exposure is unlikely to cause their fetus to develop a birth defect,” said first author Brittany Charlton, instructor in pediatrics at Harvard Medical School and Boston Children’s Hospital and a researcher in the Harvard Chan School Department of Epidemiology. “This should reassure women as well as their health care providers.”

The study was published Jan. 6 in BMJ.

Even though oral contraceptives are more than 99 percent effective with diligent use, almost 10 percent of women become pregnant within their first year of use. Many more women will stop using oral contraceptives when planning a pregnancy and conceive within a few months. Little is known about the potential health effects to children from in utero exposure to the hormones in oral contraceptives.

While previous studies have primarily relied on women recalling their past oral contraceptive use, Charlton and colleagues were able to tap into a wealth of data collected from multiple Danish health registries between 1997 and 2011 and linked by the unique personal identification number assigned to all Denmark residents. The researchers looked at 880,694 live-born infants, and the health of these children one year later. Oral contraceptive use was estimated based on the date of the mother’s most recently filled prescription.

The prevalence of birth defects was consistent across each category of oral contraceptive use, and remained so when the researchers added in pregnancies that ended as stillbirths or induced abortions. 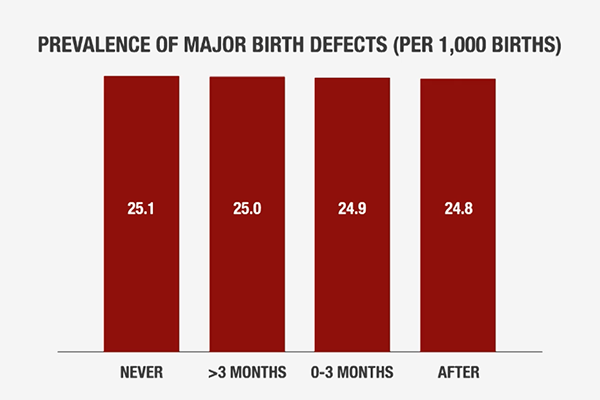