Drops in estrogen contribute to some signs of age-associated changes in men, study finds 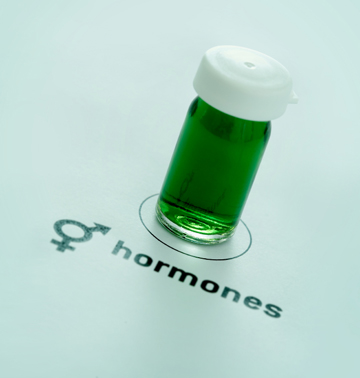 Just as the signs of menopause in women are attributed to a sharp drop in estrogen production, signs of aging often seen in middle-aged men—changes in body composition, energy, strength and sexual function—are usually attributed to a less drastic decrease in testosterone production that typically occurs in the middle years.

A new study by HMS researchers at Massachusetts General Hospital finds that insufficient estrogen could be at least partially responsible for some of these changes.

“This study establishes testosterone levels at which various physiological functions start to become impaired, which may help provide a rationale for determining which men should be treated with testosterone supplements,” said Joel Finkelstein, HMS associate professor of medicine and corresponding author of the study appearing in the Sept. 12 issue of the New England Journal of Medicine.

“But the biggest surprise was that some of the symptoms routinely attributed to testosterone deficiency are actually partially or almost exclusively caused by the decline in estrogens that is an inseparable result of lower testosterone levels,” he said.

Traditionally a diagnosis of male hypogonadism—a drop in reproductive hormone levels great enough to cause physical symptoms—has been based on a measure of blood testosterone levels alone. These diagnoses have increased dramatically, leading to a 500 percent increase in U.S. testosterone prescriptions between 1993 and 2000. But there has been little understanding of how much testosterone is needed to support particular functions.

The study enrolled two groups of men with normal reproductive function, ages 20 to 50. All participants were first treated with a drug that suppresses normal production of all reproductive hormones. Men in the first group were randomly assigned to receive daily doses of testosterone gel at one of four dosage levels or a placebo gel for 16 weeks.

Men in the second group received the same testosterone doses along with an aromatase inhibitor, which markedly suppressed conversion of testosterone into estrogen.

More than 150 men in each group completed the study, including monthly visits for blood tests and questionnaires about their overall health and sexual function. Body composition and leg strength were assessed at the beginning and end of the study period.

Among participants in whom estrogen production was not blocked, increases in body fat were seen at what would be considered a mild level of testosterone deficiency. Decreases in lean body mass, the size of the thigh muscle, and leg strength did not develop until testosterone levels became quite low.

In participants also receiving the aromatase inhibitor, increases in body fat were seen at all testosterone dose levels, but suppressing estrogen production had no effect on lean mass, muscle size or leg strength. Adverse effects on sexual function were much more obvious when estrogen synthesis was suppressed, regardless of participants’ testosterone levels.

Finkelstein notes that this study artificially induced the kind of hormone deficiency usually seen in aging men to provide a controlled model. He and his colleagues hope to do follow-up studies in older men to confirm the accuracy of the model. Right now, decisions about whether an individual is a candidate for testosterone replacement should be made based on his symptoms and not just his testosterone level. The findings regarding estrogen’s effects suggest that the forms of testosterone used for therapy should be capable of being aromatized into estrogen, Finkelstein said.

“We also need to look into how testosterone replacement therapy would affect prostate health, including both prostate cancer and the prostate enlargement that causes unpleasant symptoms in many older men, and heart disease,” Finkelstein said. “In light of what the Women’s Health Initiative discovered about the unexpected effects of estrogen replacement therapy in women, we need a Men’s Health Initiative to investigate those questions before large-scale testosterone replacement can be recommended.”